Providing support to police during many operations and to the community in often difficult and dangerous emergency situations, the Police Air Wing has and integral role in the policing strategies of the New South Wales Police Force. 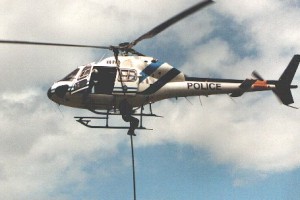 The New South Wales Police Air Wing provides an aerial support service over a range of diverse operational tasks, at the Region and Patrol level, including search and rescue.

Working closely with other emergency organizations and rescue agencies, the Police Air Wing also provides the community with a wide ranging service providing assistance during natural disasters such as bushfires and floods and providing emergency assistance when people are lost or injured in remote places inaccessible by other means.

The New South Wales Police Air Wing was first formed in 1978, operating with three pilots and five observers. The helicopters used at that time were hired from other departments and corporations such as the Roads 8: Traffic Authority and the Electricity Commission. By 1979, however, the Air Wing was in possession of its own three Bell 206 Jet ranger Helicopters with the names Polair l, 2 and 3.

The Air Wings initial role was to assist police in the crackdown on armed hold-ups in banks, but the helicopters and their highly trained pilots also proved invaluable in search and rescue operations; fire control; searches for offenders; pollution control; flood assistance; and searches for missing aircraft, marine vessels and stolen vehicles. The helicopters are very adaptable machines with the ability to carry both a patient on a stretcher and a paramedic or doctor if necessary. Our helicopters have provided the NSW Police Force with immense operational support, clocking up over 12,000 hours of flying time on two machines and over 14,000 hours on the third.

Some of the wider range of responsibilities of the Police Air Wing include: