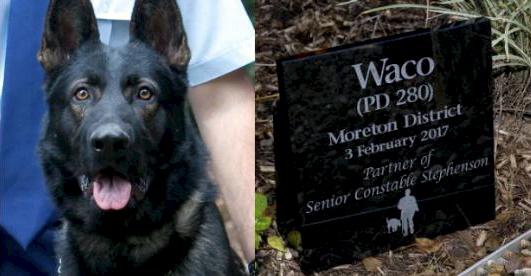 A memorial for police dog Waco, who died after suffering heat exhaustion while trying to track down offenders in Deception Bay in February, has been held today.

Commissioner Ian Stewart joined Dog Squad officers at the QPS Animal Memorial in Oxley to honour and pay tribute to the beloved pup.

During the memorial, PD Waco’s handler ( Senior Constable Stephenson ) spoke fondly of his partner saying Waco was dearly missed by him and his family.

“Waco was my first police dog and we worked together as a team for seven years,” Waco’s handler said.

“He never hesitated to protect me and for that I will be forever grateful.”

During his time, PD Waco was responsible for locating missing people and hundreds of offenders for numerous offences ranging from armed robberies and unlawful woundings to break and enters.

Commissioner Stewart said “We remember PD Waco today with fondness and gratitude for the ultimate sacrifice he gave in serving the Queensland community.”

Waco is the first working animal recognised as passing on duty since the establishment of the QPS Animal Memorial in December 2014.