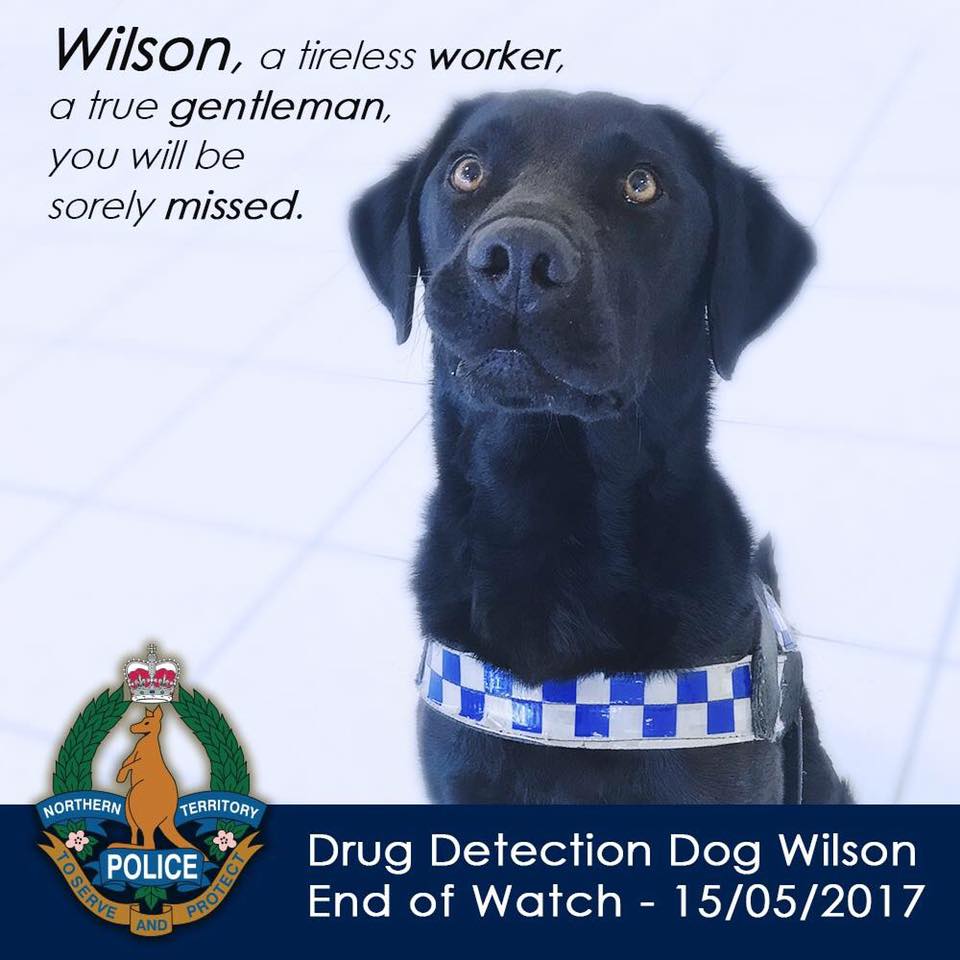 RIP Wilson,
Thank You for your service

Today we sadly say farewell to Drug Detection Dog Wilson.
Wilson moved to the NT from the Australian Federal Police in November 2013.
He took up duty in Alice Springs, where he worked diligently to stop the flow of drugs into the NT, which included policing the cross border jurisdictions.
Looking for a seachange, Wilson moved to Darwin in September 2016 where he served the Greater Darwin region, including the remote communities of the Top End.
Wilson was involved in drug seizures on a daily basis including several large scale busts across the NT.
Sadly, last week, Wilson was diagnosed with an aggressive form of cancer that was beyond treatment.
Wilson, a tireless worker, a true gentleman, you will be sorely missed.
https://www.facebook.com/MandatorysentenceforpeoplewhokillPoliceOfficers/photos/a.175535425819818.38490.147497128623648/1709735122399833/?type=3&theater&notif_t=notify_me_page&notif_id=1494681701179028
[divider_dotted]

After completing the Australian Customs puppy walker scheme, they passed all testing to become Drug Detection Dogs. The next phase of training for the puppies was the basic drug detection course undertaken by the Australian Federal Police (AFP) K9 unit in Canberra.

The Dog Operation Unit Instructor, Sergeant David Young, recently completed the re-teaming of Wilson and Yeti in Alice Springs, and has spent the last week in Darwin with the AFP Instructors completing the training for April, Astra and Cougar.

Labradors April, Astra and Cougar are all two years of age. They have been trained to locate methamphetamine, ecstasy, cocaine and heroin.

“All five new dogs have shown impressive skill in drug detection and I am very pleased with the quality of these dogs,” said Sergeant David Young.

“April, Astra and Cougar have adapted well from the pristine environment of the AFP K9 training facility in Canberra to the Darwin environment, acclimatising to the humidity and heat without any issues.

“The heat and humidity is a big factor at the moment and the dogs are working extremely well. All going to plan these dogs will be able to serve the Darwin and remote areas of the Northern Territory for the next six to seven years and will potentially detect many illegal substances.”

April, Astra and Cougar will complete their NT Police induction training this week, officially graduating at the rank of Drug Detection Dog, attached to the Darwin Dog Operations Unit.