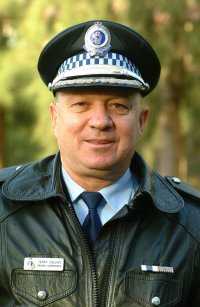 Assistant Commissioner Collins received a Commissioner’s Commendation for the arrest of three dangerous criminals at Concord while he was off duty. In 1989 he was awarded the National Medal.

As commander of Hunter Region for the past five years, he maintained a very strong focus on mid level and organised crime groups, leading to a number of successful operations.
Operation Sibret in the Newcastle area netted $60 million of amphetamines, and took out an outlaw motorcycle gang involved in heavy vehicle rebirthing and money laundering.

Assistant Commissioner Collins plans to continue this operational focus with the support of his local area commanders in Southern Region.