Moruya
Situated 306 km south of Sydney via the Princes Highway Moruya (population 2520) is a coastal town reliant upon timber, dairying, cattle, vegetables, fish, oysters and tourism for its sustenance.

Inhabited either by the Bugelli-Manji Aborigines or the Wandandian tribe before white settlement the coast was first surveyed from Batemans Bay to Moruya by Thomas Florance in 1827. The following year Irish-born tailor Francis Flanagan (1780-1863) became the first resident landowner in the district after the limits of settlement were extended from Batemans Bay to the Moruya River.

Flanagan arrived in NSW in 1827 with capital enough to qualify for a grant but Governor Darling refused to grant land to a man of Flanagan’s ‘class’. After journeying to Ulladulla by boat Flanagan travelled overland with Aboriginal guides, building a family home at the site of present-day Mullenderee (2 km north of Moruya). 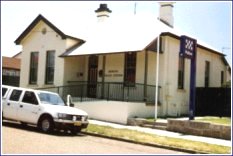 In 1830 John Hawdon took up the Kiora property, 4 km west of Moruya. He took it up as a squatting run and built a house there in 1836. Hawdon became an active figure in local affairs. He also owned and ran a transport ship, the Alligator, retiring to a site near Tuross Heads in the 1860s.

The first harbour in the area was established at Broulee as a dangerous sand bar at the mouth of the Moruya River caused difficulties for smaller ships and prevented access by larger ones. The Broulee area had been surveyed and gazetted in 1837 and land sales commenced in 1840 when a post office was opened, receiving mail weekly overland from Braidwood.

In 1840 Broulee became the site of the first court in the district and, the following year, was made the centre of a police district which covered the area from Jervis Bay to Eden. But Broulee’s importance was short-lived. A flood washed away the particularly dangerous sand bar at the mouth of the Moruya River in 1841. In 1848 land was opened up for sale. A town site was surveyed and Surveyor Mitchell, a supporter of Aboriginal place names, wanted it called ‘Mherroyah’; this supposedly being the Aboriginal word for ‘resting place of black swans’ which were very common in the district. Thus ‘Moruya’, or ‘Mherroyah’ was adopted when the town was gazetted in 1851.

That same year gold was discovered 60 km upstream at Araluen and on smaller creeks running into the river between Araluen and Moruya. The Araluen valley proved one of the richest goldfields in the county. Initially diggers disembarked at Broulee and walked to the site but, with the establishment of a new and improved road from Araluen to Moruya between 1856 and 1861, Moruya became the preferred service centre to the northern goldfields.

In 1859 the court was relocated, building and all, to Moruya, where it remained until the present courthouse was constructed in 1879. The Erin-go-Bragh Hotel was also shifted from Broulee Island to Campbell St, Moruya by Abraham Emmott who opened it as the ‘Beehive’ store. Emmott later set up his store elsewhere and used the old inn as his home, naming it ‘Merlyn’, until he could afford to build what was one of the first semi-detached houses in Moruya in 1875. ‘Merlyn’ was demolished in 1978 as part of the development of the new shire offices but the brick house survived and became the property of the Moruya Historical Society in 1975.

Moruya continued to prosper as a gateway to the goldfields.

Gold was mined at Wagonga in 1860s and a silver mine opened in Moruya in 1861 but was later abandoned. The infrastructure of the town continued to develop in the 1860s with churches, stores, hotels, banks, blacksmiths and newspapers opening.

Fine-grained grey granite was initially quarried in the 1860s for the Wesleyan Church and local harbour works.

In 1868, John Young, the contractor for the Sydney GPO, leased land from the Louttit family on the south side of the river and opened a quarry, shipping stone to Sydney. Samples were sent to then Colonial Architect James Barnet, who used it for his work on the decorative columns of the facades at the Sydney GPO in the early 1870s. When Young’s lease expired the Louttit family took over the quarry which supplied material to Sydney for the statue of Captain Cook in the Sydney Botanical Gardens, St Mary’s Cathedral and the headquarters of the Bank of NSW.

This quarry was taken over in 1924 by the contractors for the Sydney Harbour Bridge, Dorman Long & Co., who chose the material for the bridge’s pylons.

The company built Granite Town adjacent to the quarry, a 1000-acre village with 72 mostly-four-room low-rent cottages, that existed between 1924 and 1931. It housed some 300 people in all, including 150 stonemasons, toolsmiths and quarry workers recruited at good wages from Aberdeenshire (noted for their skills as granite masons), as well as Italian craftsmen and the families of many of the migrants.

The first bridge across the Moruya River was erected in 1876 though the havoc wreaked by frequent flooding saw new bridges erected in 1900 and 1945 and, most recently, in 1966.

The Moruya Co-operative Dairy factory was opened in 1892, supplying the Sydney markets. At this time the population of Moruya was about 1000 (it was 2386 in 1986). A cheese co-operative was formed the same year in Bergalia and the Union Dairy Factory opened there in 1893.

Tourism became increasingly important in early twentieth century, particularly with the establishment of Canberra in the 1920s. After the passing of Local Government Acts in 1906 the Eurobodalla Shire was created with Moruya as its headquarters. The municipal council was incorporated into it in 1913.

Today it is a successful and relatively prosperous service centre although its position away from the coast has seen the coastal destinations develop more rapidly. The Moruya Police sector takes in Mossy Point, Moruya, down to Tuross and Potato Point and include Bodalla.

Six police officers are stationed at Moruya and one at Bodalla station with one vehicle at each station.