Bungendore
Small township only thirty minutes drive from Canberra.
Bungendore is a small town with a numerous specialty shops and old stone, brick and timber buildings. It is located in a beautiful valley near Lake George, 265 km south-west of Sydney, 26 km north-east of Queanbeyan and 701 m above sea-level.

Once occupied by the Ngarigu people, the first Europeans in the vicinity were the exploratory party of Charles Throsby. Captain Richard Brooks set up a stock station at Turallo Creek in 1824. That same year, botanist Allan Cunningham recorded the existence of this outstation in the area he called ‘Bungadow’.

The village began around 1835 and mail started arriving as part of the Queanbeyan route in 1836. The townsite was approved and Bungendore proclaimed in 1837. The following year a lock-up was built and The Harp Inn was established as the settlement became an important crossroads which linked, and still links, Goulburn, Braidwood, Queanbeyan, Canberra and Cooma.

‘Gidleigh’, just south of the present townsite, was established in 1833 by the son of Governor King. William Westwood, a convict, escaped from ‘Gidleigh’ around 1840 and became a bushranger known as ‘Jacky Jacky’. He bailed up a number of people around the district in 1840-41. In 1841 he escaped custody several times (once being temporarily locked up in what is now the Lake George Motel) before being captured and sentenced to Norfolk Island where he was hanged for murder in 1846. 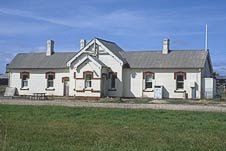 The 1850s saw at least two other hotels established. A flour mill was built in 1861, St Mary’s Roman Catholic Church and two denominational schools in 1862, the courthouse in 1864 and a public school in 1868.

The railway arrived in 1885 and the town remained a railhead until the line reached Queanbeyan in 1887. Partly because of the coming railway, the 1880s were a boom period for the town and the population increased from 270 in 1881 to 700 by 1885.

However, because Queanbeyan emerged as the major town in the area, Bungendore has essentially remained a country village serving the surrounding graziers. Hence there are several rural suppliers and related industries in town.

In recent years the social balance in the town has been somewhat altered and it has acquired a slightly more metropolitan air due to the presence of commuters from Queanbeyan and Canberra and of professional people. A number of tourism-oriented businesses have sprung up in town such as antique and art-and-craft shops, restaurants and tearooms. Wineries, hobby farms and turf farming have also emerged of late.