16 Thredbo Terrace
Phone: 02-6456-2244
Jindabyne
Popular destination on the edge of the Snowy Mountains
Like Talbingo and Adaminaby, modern day Jindabyne is a new town created after the original settlement was drowned by the Snowy Mountains Hydro-electricity Authority in the late 1960s.

Modern day Jindabyne has little to commend it. It is rather soulless and perhaps the only real advantage of its modernity is that it has a number of original and interesting new churches including the unusually named St Columbkillies Catholic Parish Church and the Uniting Church both of which are perched on the hill overlooking the town and the lake.

Beside Lake Jindabyne (and easily seen from the road) the Australian Polish community have built a huge statue of Count Paul Strzelecki who explored the wilderness of the Snowy Mountains and named Australia’s highest mountain. The plaque on the statue reads:

‘Sir Paul Edmund Strzelecki. Born in Poland on 20 July 1797. Arrived in Australia on 25 April 1839. From 1839 to 1843 he explored and surveyed vast areas of New South Wales, Victoria and Tasmania. While exploring in the Snowy Mountains region he discovered and climbed Mt Kosciuszko which he named in honour of the Polish leader and patriot Tadeusz Kosciuszko. He discovered gold and silver in New South Wales, coal deposits in Tasmania, investigated the possibilities of irrigation, measured the heights of mountains, carried out soil analysis and collected and identified many fossils and minerals. Geology, meteorology, zoology and mineralogy.’ 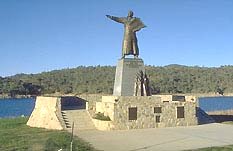 But Strzelecki was hardly the first explorer or settler in the area. Jindabyne is associated with the earliest settlers in the Snowy Mountains – the Ryries and the Pendergasts. It is thought that the Pendergast brothers, sons of an ex-convict, arrived in the area as early as the 1820s and certainly by the late 1830s both the Pendergasts and the Ryries had runs and were raising sheep and growing a little wheat. The Ryries actually built a flour mill in the area in 1847.

The gold rush in 1859-60 gave the area a brief boost which resulted in the establishment of a general store and a post office (1862) and in 1882 a school was opened at Jindabyne with a Police Station being constructed the following year. The decision to release Rainbow trout into the Snowy River in 1894 was the beginning of a fishing tradition which continues today.

The tiny settlement of East Jindabyne has grown up on the far side of the dam and is located directly above the site of the old township. In fact some of the roads in East Jindabyne still disappear into the lake to continue as underwater roads in Old Jindabyne.

The departure of Old Jindabyne under the waters of the Snowy River inspired the poet Douglas Stewart to write ‘Farewell to Jindabyne’ with the doggerel:

Let us lament for Jindabyne, it is going to be drowned,
Let us shed tears, as many as the occasion warrants;
The Snowy, the Thredbo and the Eucumbene engulf it,
Combining their copious torrents.

The Alpine Way
Jindabyne is the start of the Alpine Way which was constructed by the SMA and opened in 1956. It is a delightful road (although some of it is still unsealed) which winds through the Snowy Mountains to Khancoban offering spectacular views of both the mountains and Murray 1 and Murray 2 Power Stations which are hidden in gorges on the far side of the range.

Jindabyne Police Station has a Police Boat ready for action if required, the men stationed at Jindabyne are trained in all types of search and rescue operations and can set off for any destination within the area using special equipment that is available to them.

In 1999 police from Jindabyne played a major role in the search for missing snowboarders lost in the area, this search involved the use of specialised equipment that enabled searchers to carry out the search in a professional and thorough manner. The training that these police have to do and the cold environment that it is carried out in, give them the edge on search and rescue operations in this harsh and sometimes dangerous countryside. Below are Senior Constable’s Hill and Murphy about to jump from a Army Caribou in a training program with other search and rescue personal. These training programs enable these police officers to learn the latest techniques in all aspects of search and rescue.

Below is a photo taken from the steps of Jindabyne Police Station on the 05-02-1998. This was the year that the Kosciuszko National Parks were subject to the wrath of Mother Nature. The night sky resemblance that of a volcano and likened the area to one of molten larva running down the mountain side. The area is now green again and awaiting this years snow.

The mountain burns in the night sky.