Huskisson
Quiet and attractive township on the shores of Jervis Bay

Located on the shores of Jervis Bay 24 kilometres from Nowra and 179 km south of Sydney via the Princes Highway, Huskisson is a typical, under-developed, sleepy holiday resort and fishing port. The main street has takeaway food shops, a coffee shop, a dive shop and a huge, beachfront hotel – The Husky Pub – which provides drinkers with delightful views across the bay. Here you can sit in the beer garden, enjoy a meal at the Peninsula Restaurant and let the world go by.

The Jervis Bay district was originally inhabited by the Dhurga Aborigines. European exploration of the area around the present town began in 1812. When wool prices soared at the outset of the 1840s Governor Gipps sent 70 convicts to cut a track that has become known as The Wool Road from Braidwood to Jervis Bay so that wool could be shipped to Sydney instead of transported on poor roads via Goulbourn. As a result there was great optimism about the future of the district, reflected in Gipps’ decision to establish the settlement of Huskisson on the western shore of the Bay in 1840. Although the town was laid out that year it was not settled for another 23 years. 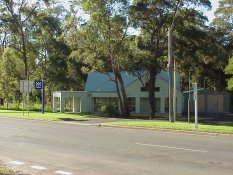 The town was named after William Huskisson, secretary of the colonies and leader of the House of Commons from 1827-28. Huskisson had the misfortune to be run over by a locomotive while talking to the Duke of Wellington at the opening of the Liverpool and Manchester railway in 1830.

A man named George Dent visited Currambene Creek in 1861 looking for timber. He established the local shipbuilding industry in 1864. The availability of local timber encouraged the growth of the industry which was thriving by the 1880s and continued until 1966. One boat made locally in 1912, the Lady Denman ferry, which operated in Sydney Harbour, was towed back to Huskisson in 1981 to serve as a maritime museum. Little else remains from the early days of settlement.