Kangaroo Valley
A beautiful valley behind the coastal escarpment

It is difficult to do justice to the beauty of Kangaroo Valley, a delightful scenic area which is centred around a small village 159 km south of Sydney via the Princes Highway. The patchwork quilt of farms, the rainforest clinging to the steep slopes of the valley, the prettiness of the river, the facilities for the traveller, the small creeks which cross the valley, all make it a very special and particularly attractive place. These qualities have been recognised by the National Trust which classified the town in 1977.

Most people who travel to Kangaroo Valley are happy to picnic beside the Kangaroo River, walk across the Hampden Bridge, hire canoes and go for a row on the Kangaroo River, visit the craft shops, food shops and tea rooms in the village, and just generally relax. The more adventurous can go bushwalking, and those determined to push on can wind their way up from the valley and head towards the dramatic Fitzroy Falls which tumble over the escarpment. The valley is almost entirely surrounded by sheer sandstone cliffs. 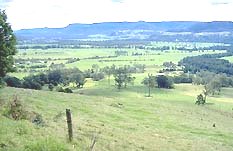 The Wodi Wodi Aborigines, whose chief meeting place was Lake Illawarra, occupied the land long before European settlement. An 1826 census indicated 79 Aborigines in the valley. Botanist James Backhouse’s account of his meeting with a gathering in 1836 describes how : ‘several of them speak tolerable English. They were attired either in skin garments, fastened over one shoulder and under the other, or in blankets, or articles of European clothing; one having on a pair of trousers, another a shirt, a third a jacket, and so on. Few of them had any covering for their heads, and none had shoes.

‘All of them had undergone the ceremony of having one front-tooth knocked out, on being admitted to the privileges of manhood; and they had the cartilages of their noses perforated and bones, the thickness of a quill, and about four inches long, through them. They wore fillets of network about their heads, and beads, formed of short pieces of reed, about their necks.

‘Among their possessions was a musket, exchanged for work undertaken. In 1846 a settler noted five encampments of Kooris in the valley – ‘each camp in a separate gully’. White settlement of the valley occurred in the 1860s and the Wori Wori were driven from their traditional grounds and sacred sites. In the space of about thirty years 20,000 years of Aboriginal settlement came to an end. There appear to have been no permanent Aboriginal residents in the valley by the early 1890s.

The origins of the name Kangaroo Valley are apparent in a remark made by the Reverend W.B. Clarke who observed, as early as 1840, that the valley ‘takes its name from the kangaroos which formerly abounded here but are now extinct’.

In 1812 surveyor George William Evans and his party, guided by an Aboriginal man named Bundle, journeyed from Jervis Bay to the Shoalhaven River. They climbed Cambewarra Mountain where Evans remarked upon the magnificence of the view.

In 1815 cattleman Captain Richard Brooks received a 1300-acre land grant at what is now Dapto. By 1817 Governor Macquarie promised Brooks a 700-acre grant and Brooks set up his hut and stockyards about one kilometre from where the Hampden Bridge now stands.

In 1823 Cornelius O’Brien took up land in the area, where his overseer was assaulted by Brooks. Others soon followed in the western half of the valley. Five years later Alexander Berry’s men crossed Kangaroo Mountain to find a million feet of cedar south of Broger’s Creek.

In 1831 Robert Hoddle made the first land survey of Kangaroo Valley and the surrounding escarpments. The years 1835-41 saw large land grants conferred upon several men.

A census of 1841 indicates that there were two free men and five convicts living in Kangaroo Valley but, in reality, including sawyers hidden away in the forests, there were between ten and twenty whites, not to mention the Aborigines.

Irishman Charles McCaffrey and his family became the first white family to settle in the valley in 1846, when they came to work for Henry Osborne. They also became the first to manufacture sufficient butter to begin exporting it outside of the valley, thus foreshadowing the dairy industry which would later become the area’s chief source of employment .

A number of the pioneer farmers were from county Fermanagh in Ireland. The manufacture of moonshine whiskey followed in their wake, a tradition carried on at least until the end of the 1920s.

The population rapidly increased from about 200 whites in 1860 to around 1400 by 1880. A new, improved access road into the valley was cut in the early 1860s and the first public school, post office and church (Anglican) were completed in 1871. Roman Catholic and Wesleyan churches followed in 1873 and a Presbyterian kirk the following year.

The township grew with the improvement of roads in the late 1870s, the opening of a bridge over the river in 1879, the introduction of the cream separator in 1881, which facilitated the development of the dairy industry, the introduction of telephones in 1884, improvements in local banking in the 1880s and the opening of butter factories from 1888.

By the 1890s the town was in decline due to a variety of circumstances including the 1890s depression, a rabbit plague, the attraction of the developing coal mines around Wollongong and the improvements in the production of butter and dairy products. Today Kangaroo Valley township is a small village of about 280 residents. It is a tourist destination surrounded by a small number of farmers and a large number of weekend residents and people who have a few hectares and have escaped the bustle of city life.

Hampden Suspension Bridge
1898 saw the opening of the district’s central man-made feature, the Hampden Suspension Bridge. Reputedly the oldest surviving suspension bridge in the country and the third-largest in the state it spans the Kangaroo River on the main road from Kangaroo Valley to Moss Vale. Noted for the castellated towers at either end, which support the cables and which resemble the turrets of a medieval castle, it was named after the then-governor of NSW, Lord Hampden. His real name, less impressively, was Henry Bland. For understandable reasons he adopted the title as he was descended from British parliamentary leader John Hampden. The bridge’s centenary was celebrated in 1998. There are picnic and barbeque facilities on both sides of the river. 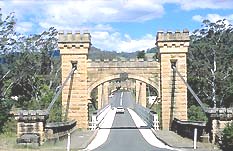 George Wiley Bridge and Pioneer Settlement Reserve
In 1931 another impressive suspension bridge was erected over Broger’s Creek by local men (dairy farmers and a blacksmith) with no technical expertise or assistance and at their own expense. 63 metres in length, the George Wiley Bridge supported vehicles of up to 2 tonnes for 45 years until superseded by a concrete span. It is now located at the northern end of the Hampden Bridge adjacent the Pioneer Settlement Reserve.