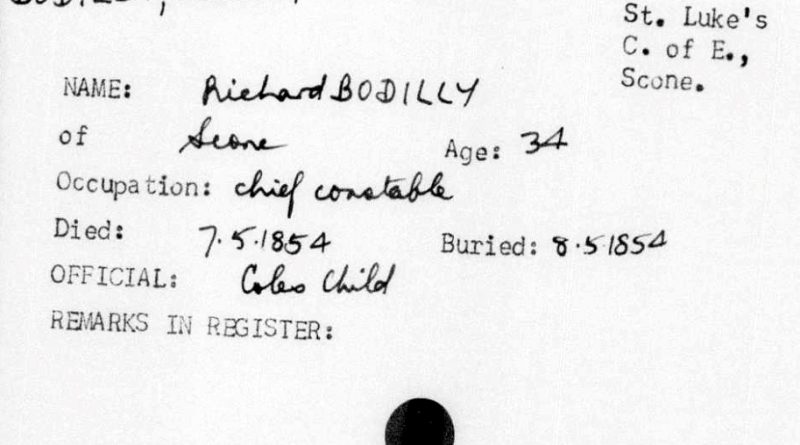 Inscription:  Sacred to the memory of Richard Bodily ( Note there is only 1 ‘L’ in the surname )( Gravestone has yet another spelling ” Bodiley “, A Native of Penzance in Cornwall, England.  Chief Constable of Scone, who departed this life on the 7th May 1854 ” from the effects of a Pistol Shot accidentally received in the discharge of his duty “.  Aged 33 years.

Buried at: St Luke’s Church of England,  in the Churchyard, Scone, NSW 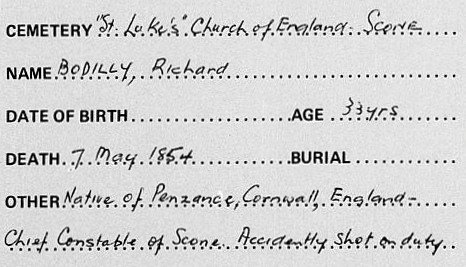 The chief constable was accidentally shot while escorting two prisoners to the Scone Police Station. As Chief Constable Bodilly and another constable were en route with their prisoners a pistol discharged, wounding the chief constable in the knee. Although he was conveyed to Scone for treatment, he succumbed to his wound and passed away on 7 May, 1854.

The coroner’s verdict following an inquest at Scone on 8 May, 1854 indicates that death was caused by the “accidental explosion of a pistol”. It appears he was succeeded at Scone by Chief Constable Hugh Brien Murray. The Maitland Mercury and Hunter River Advertiser of 10 May, 1854 reported the incident.

“ACCIDENT – A few days since one of the Muswell Brook constables was sent to the neighbourhood of Scone in search of two men, for whose apprehension warrants were issued. The chief and another constable of Scone also went in search, and apprehended the men, and whilst escorting them to the lockup, by some means or other the chief constable’s pistol went off, and the ball lodged in his knee and fractured the bones. He was conveyed to Scone, and attended by two doctors, who endeavoured to extract the ball, but could not do so.”

At the time of his death the chief constable was aged 33 years and was stationed at Scone.

Before the Chairman and Mr. David Allan, J.P.

The Crown Prosecutor conducted the following cases on behalf of the Crown.

John Day and Philip Kedley were indicted for assaulting Richard Bodilly, a constable, while engaged in the execution of his duty.

The Jury found the defendants guilty, with a recommendation to mercy, and they were sentenced to be each imprisoned and kept to hard labour in Sydney Gaol for the term of three calendar months.

Account of sums received by the Colonial Treasurer, gratuity on leaving the Police Force.

STATEMENT of all Suns of Money received in aid of the Funds of the SCONE BENEVOLENT ASSOCIATION, from the 9th June, 1853, to 9th June, 1854.