Died on:  Wednesday  8 June 2016 at Werrington Rwy Stn whilst videoing the Indian Pacific.

In lieu of flowers donations to Aspect Fundraising, PO Box 361, Forestville NSW 2087 would be appreciated. 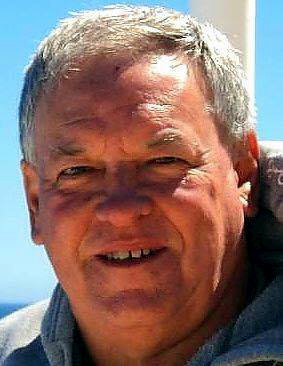 It is reported that Rob was at Werrington Railway Station and collapsed.  CPR was performed but was not successful.

May Rob forever Rest In Peace.

Bob was a keen amateur Radio operator, he also has a web site. www.airsearailroad.com where he dealt with anything to do with the forms of transport mentioned in the web site name.

At least one can say that Bob passed away doing what he loved filming the various trains “Indian Pacific” etc to put on his web site and “Youtube”.

Rob also wrote articles in ‘ On the airbands ‘ column in Australian Aviation magazine.

BELL, Robert Arthur.
(known as Bob)
Late of Georges Hall. Cherished husband of Lynne. Much loved Dad of Carolyn, Peter, Christine and Rosemary. Father-in-law of Stephen and Matthew. Adored Pa of Zachary, Nicholas, Alexander, David, Joseph, Jacob, Emily, Jack and Holly. Brother to Rhonda. And a friend to many.

Heaven will be richer for the presence of his
loving soul.

Bob’s family and friends are warmly invited to attend his funeral service to be held at the South Chapel, Woronora Crematorium, Linden Street, Sutherland on Thursday June 16, 2016 at 2pm. In lieu of flowers donations to Aspect Fundraising, PO Box 361, Forestville NSW 2087 would be appreciated. –

Wednesday, 15 June 2016
We all lost a colleague, friend and good mate. Rest in Peace Bob and fly with the angels.
Contact Me
Wednesday, 15 June 2016
Sgt Bob Bell (Burwood days).
Not too many people were of your calibre and were such a great leader and friend to so many. You influenced my career and supported me as my sergeant and as friend. You made us laugh and showed that a Sgt could be human after all. Those shifts watching the flight paths of planes at your desk and you trusting me in a cop car is still spoken of to this day and still makes me laugh. Lost but never forgotten.
Wednesday, 15 June 2016
We always enjoyed Bob’s posts on AirSeaRailRoad.com and his enthusiasm for all mode of transports and amateur radio. Loved discussing many of these subjects with Bob over a cup of tea at Bankstown Airport.

Bob you will be missed, we will never forget your calm way to approach all situations.

Wednesday, 15 June 2016
Bob will be greatly missed by his many friends
See more at: http://tributes.smh.com.au/obituaries/smh-au/obituary.aspx?n=robert-arthur-bell&pid=180325519&fhid=15076&eid=sp_ommatch&eid=sp_ommatch#sthash.WNRnTLd3.dpuf
[divider_dotted]
Please follow and like us:

Only just found out about the passing of an old mate. Bob you gave me the smarts, the humor and the faith to stick with the COPs at time I needed every bit of encouragement. Your knowledge of radio networks and how the ‘system’ worked gave me the best introduction to life in uniform a bloke would need. Your stories from years past have stuck with me – some of which I re-tell with a grin to anyone who’ll listen. We hunted down graffiti vandals, car thieves and hoodlums all over Campsie-Belmore; those were the days! It is impossible to… Read more »

What can i say except that Bob was such an honorable man i find no words within myself to describe my feeling about his death.