Memorial:  Robert was a member of Whale Beach SLSC at the time and “The Big Swim” from Palm Beach to Whale Beach surf swim is named after him.

On 22 March, 1975 Sergeant Lynch was riding a police highway patrol solo motor cycle home at the completion of his shift. As he travelled along the Wakehurst Parkway he started to overtake another vehicle. The vehicle suddenly swerved to the right to avoid hitting a bandicoot and clipped Sergeant Lynch’s cycle. The cycle left the road and collided with a post. Sergeant Lynch was thrown off the cycle, sustaining severe injuries.

The sergeant was born in 1933 and joined the New South Wales Police Force on 4 March, 1953. At the time of his death he was attached to the Highway Patrol.

Robert Edward Michael LYNCH ( although the M for Michael does NOT appear in the 1968 or 1969 Stud Books which is unusual ) was a Cadet # 0891 and joined the NSWPF Cadet system on the 23 October 1950. This would make Robert 16.5 years old when he joined the Cadets. 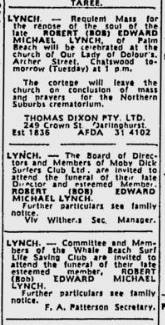