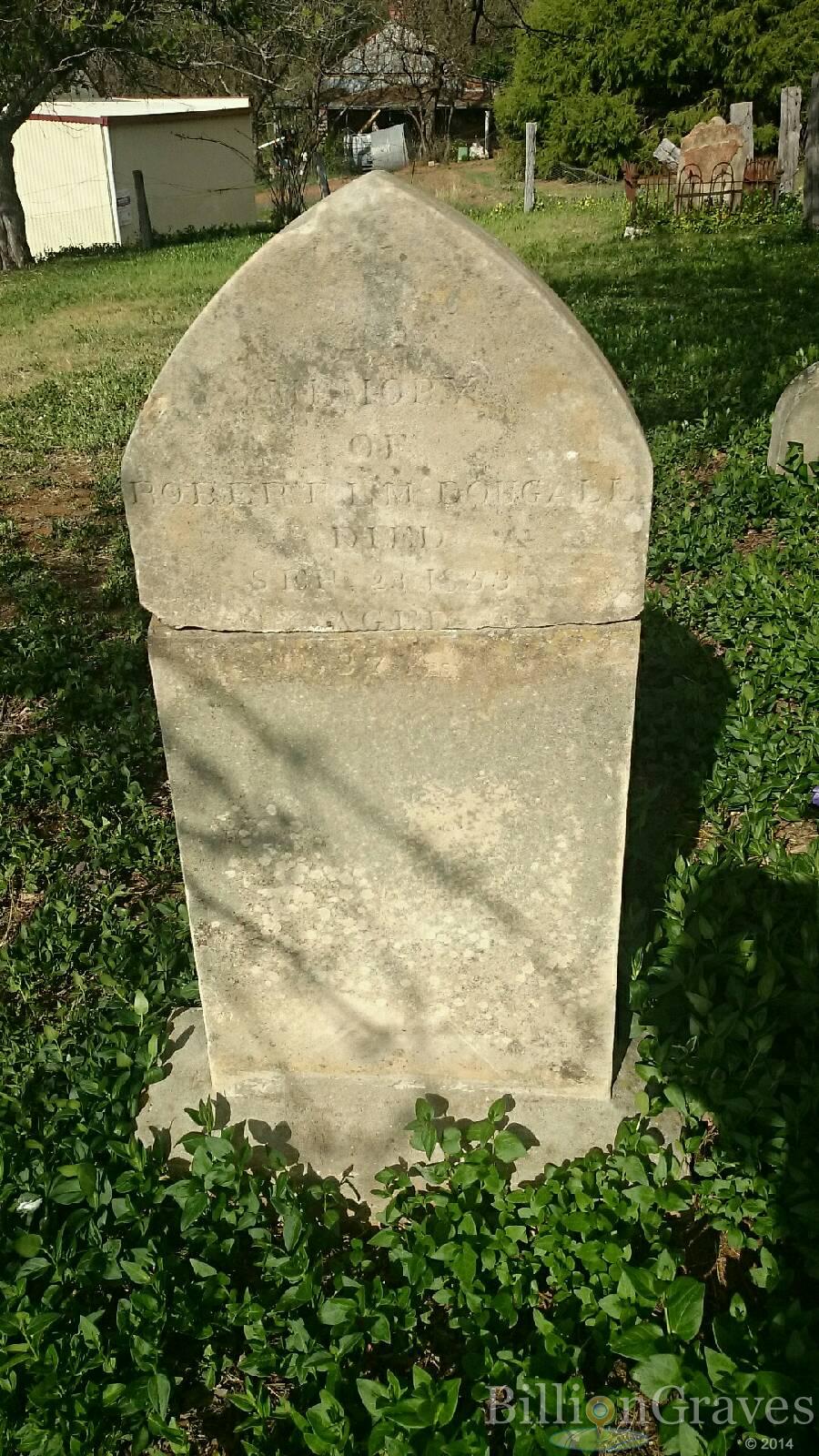 It appears that Corporal McDougall met his death in 1853 when returning to Sofala from Wattle Flat, where he had been inspecting gold licences and executing a warrant with another policeman possibly named Johnson. McDougall and Johnson had each then set out for Sofala via different routes, for some reason. As McDougall rode along the road over Whalan’s Hill his horse took fright going down a steep incline and he was thrown. It would appear that one of his feet became caught in a stirrup and he was dragged along, inflicting fatal injuries. When his riderless horse returned to town late that night a search was immediately launched and the unfortunate corporal was found about 2am. He died shortly after being taken home. He left a widow, Mary Ann McDougall and five children. His headstone at Sofala reads”McDougall” however most documents located so far indicate that the correct spelling is probably “MacDougall“.

The Sydney Morning Herald of Wednesday 5 October, 1853, p3,  carried the following account of the incident.

A melancholy accident, which terminated fatally occurred last week to Corporal MacDougall of the mounted police. It appears that the deceased was returning from the new diggings on Thursday evening when about half a mile from Sofala his horse stumbled and fell, probably on the top of him. The fall unseated him, but unfortunately one of’ his feet got entangled in the stirrup, and he must have been dragged a considerable distance on the road, as his body was in a very mutilated condition. The horse arriving in town late at night without the rider, a search was at once instituted, but it was not until two o’clock on Friday morning that he was found on the side of a hill, half a mile from Sofala in a state of insensibility. Deceased was at once removed to Sofala, and medical assistance procured, but the injuries he received were of so severe a nature that he expired on Friday evening. A magisterial enquiry was held by Mr Commissioner Johnson, when a verdict of accidental death was returned. He was a most efficient officer of the police, and the respect in which he was held by the inhabitants of Sofala was fully testified by the large concourse of all classes and denominations which last Sunday followed his remains to their last resting place. He was in the 27th year of his age, and has left a wife and five children.”

A report submitted on 26 September, 1853 by Assistant Gold Commissioner Johnson of Bathurst, sheds a little more light on Corporal McDougall, as follows.

I regret to have to report to you the death of Crpl Robt MacDougall of the Gold Police of this State who died on the 23rd instant from the effects of a fall which he received from his horse on returning from executing a warrant on the 22nd instant.

1.   No-one witnessed the occurrence but from the evidence given by persons who were with MacDougall immediately prior to it he appears to have been perfectly sober and that the horse he was riding was very restive.

2.  The deceased had been in the Police at Sofala for nearly two years during which period he bore the character of a steady, sober and efficient policeman having never been brought up for any misconduct whatever.

3rd.   He has left a wife and five children the youngest being only just born and who by this sudden bereavement are left almost destitute. I would therefore urge whether taking into considerations the good character and efficient service of the deceased a gratuity, or pension may not be bestowed upon his widow.

The corporal was born in 1816 and enlisted in the Gold Escort on 1 October, 1851. At the time of his death he was stationed at Sofala.

National Police Wall of Remembrance touch plate inscription:  – differs slightly on date of joining, his rank and station but especially the date of death.

It appears that Trooper McDougall met his death in 1853 when returning to Sofala from Wattle Flat where he had been inspecting gold licences with another policeman possibly named Johnson. McDougall and Johnson each set out for Sofala via different routes. As he rode along the road over Whalan’s Hill McDougall’s horse took fright as they travelled down a steep incline and he was thrown to the roadway. He died from his injuries shortly after being taken home. The Trooper was born in 1816 and appears to have enlisted in the Gold Escort on 26 November 1851 at the rank of Trooper. He was stationed at Upper Turon.

I wonder if Janet’s request was ever undertaken, or did the Police Association which obsessively defends police, however appalling they are not see any value for itself in liberating a few hundred dollars for the restoration asked. It probably could have saved plenty by asking local police whether they would undertake the labour, either way I wonder what was the outcome of Janet’ request nearly 5 years since.

I wish to request that the Police Heritage body place a plaque of Remembrance, recording Corporal Robert Lovell MACDOUGALL’S death in Service as a Mounted Trooper at his site of burial. I have found the headstone of Corporal Robert Lovell MACDOUGALL has broken in half & the inscription has almost been weathered away. He was buried at Sofala C of E cemetery in 1853, positioned right hand side upon the entry gate.  His widow Mary Ann remarried to another Trooper, Owen Valentine PARSLEY, her Headstone is to be found beside that of Corporal MacDougall. Robert was born in Coleraine, Londonderry,… Read more »