Medals: None for display

Officer of the Order of Australia ( AO ) – granted 26 January 1983 ( Major General )( for service to the Australian Army, particularly as Chief of Operations Army and as General Officer Commanding Field Force Command ) 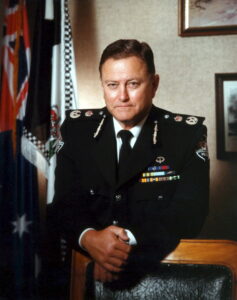 Major General Grey played a significant role in expanding the AFP’s International Liaison Network from four to 12 countries during his tenure. The network now has AFP representatives in 33 countries and continues to play an important part in the AFP’s mission to combat serious organised crime.

Major General Grey endorsed a drive to modernise police methodology, with his term as Commissioner including the introduction of significant legislative reforms in the areas of telephone interceptions, proceeds of crime and cash transaction reports. The AFP undertook Operation Lavender during his tenure, a drug seizure that culminated in the arrest of 20 offenders in August 1985 and the dismantling of a major criminal enterprise involved in drug trafficking.

Major General Grey also led significant reforms in ACT Policing which resulted in reductions in property-related crime and the expansion of the Neighbourhood Watch program.

AFP Commissioner Reece Kershaw said Major General Grey was critical in leading the early development of the AFP into the world-leading law enforcement agency it is today. He served five years as Commissioner during the organisation’s formative years.

“It was during his tenure that the AFP significantly expanded the number of officers in offshore liaison roles to better combat the criminal threats targeting our country, and his emphasis on the value of criminal intelligence to target organised crime is a legacy that continues to this day.

“The AFP and Australia owes Major General Grey a great deal of thanks for ensuring the safety of the community we live and work in.

“I extend our condolences to Major General Grey’s family at this sad time, but also our appreciation for everything he did for this country throughout his accomplished career.”

Jump to navigation Jump to search

For other people with similar names, see Ron Gray.

Grey served in the Australian Army from 1950 to 1983, attaining the rank of major general in 1978. During his career he served in Borneo, Korea, and Vietnam.[1]

Grey was Mentioned in Despatches in recognition of gallant and distinguished conduct in the Borneo Territories during the period 24 December 1965 to 23 June 1966.[2]

He was awarded the Distinguished Service Order in 1971 for his role as the Commanding Officer of 7th Battalion, Royal Australian Regiment in Vietnam,[3] and was also awarded the Vietnam Cross of Gallantry with Palm.[1]

He served as Chief of Operations – Army, and as General Officer Commanding Field Force Command in the early 1980s. For his service in these positions, Grey was appointed an Officer of the Order of Australia.[4]

In 1988, Grey was commissioned to undertake a review of the rescue services in New South Wales. The recommendations of his review were implemented by the New South Wales government in 1989.[6]

Lieutenant Colonel Ronald Grey graduated from the Royal Military College on 12 December 1951 and was allotted to the Royal Australian Infantry. After a number of staff and regimental appointments both in Australia and overseas, he was appointed on 25 November 1968 as Commanding Officer, 7th Battalion, The Royal Australian Regiment and arrived in Vietnam on 23 February 1970.

Lieutenant Colonel Grey has commanded his Battalion with distinction during its tour of duty in Vietnam. His tactical application together with his personal knowledge of the capacity of his officers, junior leaders and his soldiers, have enabled him to gain the maximum result from his force at all times.

Following a sub?unit contact on 30 December 1970, Lieutenant Colonel Grey rapidly redeployed elements of his force to cover probable enemy withdrawal routes. This timely action together with his knowledge of the enemy, the terrain and his force’s capabilities subsequently caused a major defeat to be inflicted on an enemy unit from which it is unlikely to recover for some time.

His tireless energy, devotion to duty, personal courage and tactical skill have shown him to be an outstanding Commander and his leadership of the Battalion has been in the highest tradition of his Regiment and the Australian Army.