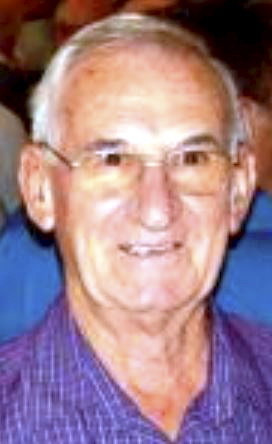 Much loved father of Lyn, Vicki, Adam, Karen and Brett. 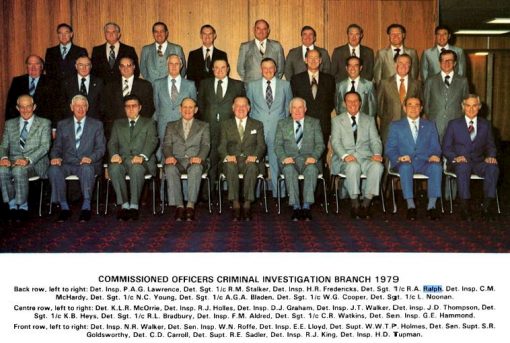 Superintendent Ronald Arthur Ralph, 55, of the anti-theft squad, appeared in Newtown Local Court and was remanded on unconditional bail to appear in Castlereagh Street Local Court on June 12.

The police internal security unit charged him with conspiring with others between November 1, 1982, and April 30, 1984, to have money corruptly given to him in his official capacity and that he accepted the money as an inducement to act corruptly.

The assistant commissioner for internal affairs, Mr Bob Shepherd, said in a statement that the unit had been granted a warrant in Castlereagh Street Court yesterday morning for the arrest of Superintendent Ralph and another person.

The warrants had been sought after advice from the Crown Prosecutor, Mr Barry Newport.

Police were yesterday looking for the other person.

Mr Ronald Arthur Ralph, 58, was sentenced to 14 years for conspiracy along with one of the drug dealers he protected, Mr Morres George, 49.

In passing sentence, Judge Wall said ‘ he had never seen a worse case of conspiracy.

He said it was more serious than the corruption cases involving the former NSW Chief Magistrate, Mr Murray Farquhar, and former NSW Minister for Corrective Services, Mr Rex Jackson, who were both sentenced to jail terms. ( Mr Farquhar was released in January, 1986, after serving 10 months of a four-year sentence. Mr Jackson is still in jail after being sentenced in September, 1987, to seven years’ jail. )

Judge Wall said Mr George had operated a heroin racket with another man and had conspired with Mr Ralph to receive police protection.

Mr Ralph received a 5½ year non parole period, while Mr George‘s non parole period was increased to 9½ years due to a sentence he is serving for his role in the Jackson early-release conspiracy.

Mr Ralph was a detective inspector with the Internal Affairs Branch when he agreed to protect the racket, and later was promoted to detective chief inspector-in-charge of the Organised Crime Bureau at CIB headquarters.

Mr Ralph collapsed into his chair, silently weeping, when the judge read out the sentence, while his wife stifled her gasps and sobs.

During sentencing, Judge Wall said the crimes had been committed for no other reason than “plain greed” and the desire for “filthy lucre”.

The essence of the conspiracy was that a police officer had acted corruptly to operate a protection racket for two major heroin dealers.

“It is difficult to imagine conspiracies more repellent or nauseous than these,” Judge Wall said.

The judge said special provision would be made for Mr Ralph during his jail term because of his former position as a policeman.

A third member of the conspiracy, known as “John Smith“, had given evidence for the Crown after being granted immunity.

Mr Ralph then began to receive payments of up to $ 1000 weekly from each man, sometimes $5000, to protect the two from prosecution.

The scheme ended with the arrest of Mr Smith by the Australian Federal Police and the evidence he later gave against his former colleagues.

SYDNEY: Former chief inspector of police, Mr Ronald Arthur Ralph, was refused bail yesterday pending an appeal against his conviction on three charges of conspiring to bribe a public officer.

Mr Ralph, 58, was sentenced on December 29 to 14 years’ jail with a non-parole period of 5½ years after being found guilty of charges related to receiving $80,000 for protecting two heroin dealers.

When charged, Mr Ralph was a detective chief inspector in charge of the organised crime bureau at CIB headquarters.

These included the form of the indictment, the conduct of the trial by Judge Wall in the District Court and the judge’s directions to the jury.

Mr Adams said the main witness against Mr Ralph had been a police informer whose evidence was corroborated by a police superintendent.

The superintendent had been put forward by the Crown as “a man of unquestionable probity” but had since been charged with an offence.

Mr Adams said Mr Ralph‘s appeal could not be heard until at least June. Until then he was being kept in strict security which was a hardship for him and his family.

Justice Yeldham said the special or exceptional circumstances necessary for the granting of bail had not been shown. He rejected the bail application.

As he was being led from the court Mr Ralph told the judge, “I would just like to say I am an innocent man being persecuted”.

Policeman out after appeal

SYDNEY: A former chief inspector of police in charge of the Organised Crime Bureau, jailed for 14 years after allegedly receiving $80,000 for protecting drug dealers, was acquitted yesterday by the Court of Criminal Appeal in Sydney.

Mr Ronald Arthur Ralph, 58, had appealed against his conviction and sentence on three charges of conspiring to have him act corruptly in the discharge of his duties.

Judge Wall, in the District Court, had fixed a non-parole period of 5½ years.

A verdict of acquittal was also entered yesterday against one of Mr Ralph‘s alleged co-conspirators, Mr Morres George, 49, who had also been sentenced to 14 years’ jail. Mr George‘s non-parole period was fixed at 9½ years because he was already serving a sentence for his part in the Rex Jackson early release conspiracy.

The Crown had alleged that between November, 1982, and April, 1984, Mr Ralph had been paid amounts of between $1000 and $5000 a week to protect Mr George and a man known as John Smith from prosecution on drug charges.

The three judges unanimously ruled that the convictions of Mr Ralph and Mr George were unsafe and unsatisfactory.

SYDNEY, Monday. — A young woman killed by a thief during a $50,000 gem robbery was an innocent victim, police said today.

“She lay down on the floor and he just went bang”. Detective Sergeant R. Ralph said. “It was a cold-blooded callous thing to do”.

“This will show you I mean business”, the killer said as he fired a bullet into Miss Grogan’s back.

The gunman rejected opals valued at S250 each.

Police believe the killer, a man aged between 35 and 38, knew exactly what he wanted and was prepared to do anything to get more valuable opals in a safe.

He took Australian opals, in diamond settings, valued about $50,000. They could be intended for the overseas market.

The killer, with a stocking over his head, grabbed Mr Anderson when he went to put out rubbish bins shortly after 10pm.