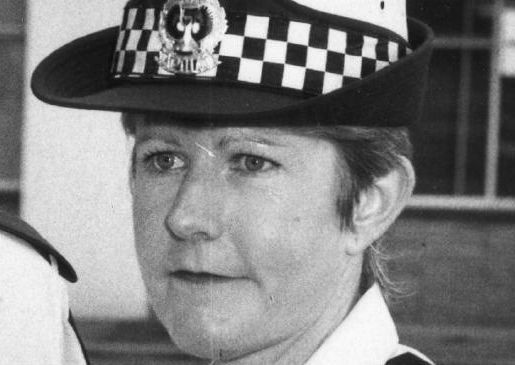 Rank:  Constable ( does not appear as though she progressed, Rank wise, past Constable in 41 years.  In 2015 she was described as a ” Career Constable ” )

Family and Friends of Sharynne are invited to attend her Funeral Service, which will be conducted on Friday, October 21, 2016 at 1.30pm entirely in the Adelaide Town Hall, 128 King William Street, Adelaide.

In lieu of flowers a donation in memory of Sharynne may be posted to SCOSA (Spastic Centres of SA), PO Box 49, Woodville SA 5011 or beyondblue, PO Box 6100, Hawthorn West, Vic. 3122. Envelopes will be available at the service

“Sharynne, I am very sorry to hear of your passing. You put in many years of service to SAPOL and your dedication to the force will certainly be sadly missed by all. My thoughts are with you, your immediate family and to your collegues in SA Police. Your legacy will live on forever. May you now rest in peace Sharynne. Forever in our hearts, from one of your cousins Kevin Marsland, SA Ambulance Service”
– Kevin Marsland 18th Oct 2016 – 10:15:03 PM

Officer granted prestigious honour
Mathew Rodda
South Australia Police
Constable Sharynne Grant’s 40 years of distinguished service with South Australia Police (SAPOL) has been recognised in the 2016 Australia Day awards with an Australian Police Medal (APM).
Constable Grant joined SAPOL in 1975 and worked in a range of operational areas before becoming
a Victim Contact Officer in 1994.
For the past 20 years she has been committed to providing outstanding services to victims of crime and persons affected by trauma. Constable Grant brings to the role a passion for service to victims and an empathy for them that goes beyond mere words of comfort.
She has created special bonds, particularly with vulnerable victims, and made herself available, at work and in her own time, providing practical and emotional support to families and victims of crime.
Constable Grant’s knowledge of procedures, processes, and services to victims and her commitment to assisting has been invaluable to investigators.
“I’m thrilled and honoured to receive the APM,” Constable Grant said.
“I’ve been passionate about assisting victims throughout my whole career, so this is the greatest reward I could ever achieve for my work.
“Many of the victims I have helped over the years have contacted me to share their kind words and excitement about my award recognition, which makes it even more special.”
SAPOL’s longest ever serving female officer, Constable Grant has previously been nominated for the South Australia Police Officer of the Year award and been awarded life membership by Victim Support Services.

Mr Rau described Constable Grant as a “highly-respected and long-serving member of our police force”.

“As South Australia’s longest ever serving female officer, she was a guiding light for many of her colleagues,” he said.

“Constable Grant excelled in her career, and particularly so in her service as a Victim Contact Officer.

“(Her) passion for her role and empathy has provided tremendous support to victims and their families.

“Our condolences are with (Constable Grant’s) family, friends and colleagues at this difficult time.”

“On behalf of all members of the South Australia Police, I extend our condolences to Sharynne’s family, friends and colleagues,” he said.

“On a personal note, I am deeply saddened by her death.

“It would be inappropriate for me to further discuss the circumstances of this matter, but in keeping with usual practice a report will be prepared for the State Coroner.”

Constable Grant joined SA Police in 1975 and remained in the force until she died.

Her service to the community and support for victims of crime and those affected by trauma was recognised on Australia Day this year when she was awarded an Australian Police Medal.

She said it was vital that women have a strong presence in the police force.

“I think it’s very important, they do a wonderful job,” she told the ABC.

“We’ve got a female deputy commissioner, she’s fantastic, through the ranks, and they just do wonderful work, really wonderful work and equal work with the men.

“Sharynne was a deeply respected member of the police community, loved my many and her passing is a terrible tragedy,” he said.

Snapshots of a century of women in police in South Australia

Hundreds of female police officers, past and present, have marched through Adelaide’s CBD to mark 100 years of women in the police force.
South Australia appointed its first female officers as equals with their male counterparts, on December 1, 1915.
At the time, a large percentage of Adelaide’s men were overseas fighting in World War I and calls were made to employ female officers.
South Australia’s longest serving female police officer Constable Sharynne Grant has seen many changes over the years.
Ms Grant has been a police officer for almost 41 years and said she was drawn to the force after meeting “a wonderful female police officer”.
“I joined in 1975, I graduated that year, and I joined because of a wonderful female police officer I’d met in 1961,” Ms Grant said.
“Lots of changes in uniform, and lots of changes in women just doing everything.
“I was the second group of females on patrols, on mixed patrols, and there are a lot more females now, there’s 1,264.”
She said it is vital that there is a strong female presence in the police force.
“I think it’s very important, they do a wonderful job,” she said.
“We’ve got a female deputy commissioner, she’s fantastic, through the ranks, and they just do wonderful work, really wonderful work and equal work with the men.
“It’s very emotional for me, being the longest serving and probably the oldest, it’s very emotional.”
Danielle Lee Zára Drib 🙁 🙁
October 12 at 1:37pm
Mark Langford Sharynne and all SAPOL personnel, thank you for your service
October 12 at 4:38pm
Ken Peglar Oh why why why. So sad.
4 · October 12 at 4:55pm
Chris Trezise Holly Trezise
October 12 at 5:35pm
Annelise Hansen Madz Ando could you please show your mum?
2 · October 12 at 5:58pm
Lisa Anderson Pretty sure the early female cops held their gun in their purse

?
October 12 at 9:32pm
Hayley Branch Congratulations Sharynne!
I enjoyed and feel privileged for the time we worked together.

?
You are an inspiration.
1 · October 12 at 9:54pm
Kimberley Capper Dianne Capper
October 12 at 10:05pm
Dianne Capper That was my uniform too in 1978 and yes it was attractive but not practical, handbag and all. I went on early patrol work with this lady after first graduating. As third person in the car of course as women never worked on their own, always with a male officer.
October 12 at 10:41pm
Jacquelynne Willcox Dear Shazzie darling. This is too much. RIP
October 12 at 10:16pm
JA Tee Peta Giles
1 · October 12 at 10:39pm
AJ Menz RIP Shaz your infectious laughter and smile will be sadly missed around the office.
1 · October 12 at 10:54pm
Neeta WillyWillshire RIP. Beautiful lady xx
October 12 at 11:26pm
Barb Young Fond memories RIP lovey x
October 12 at 11:29pm
Phil Main I had the privilege of knowing Sharynne for nearly 40 years. I worked with her closely at Adelaide CIB and marvelled at her skills in dealing with victims. I shared many great moment in court with her and reminiscing over our past policing career. I truly enjoyed this woman’s company. For those who know her real story she will serve as a testament of true endurance and resilience.
I will deeply miss that beaming smile.
8 · Yesterday at 12:19am
Kerin Shearing Tommy Newton
23 hrs
Tania Giles Respect!

??
16 hrs
Matt Thomson Stella Thomson
15 hrs
Stella Thomson A lady who was a pioneer in the force. What a beautiful soul.
12 hrs
Ala Sheldon RIP Sharynne. A truly beautiful lady.
14 hrs
Darren Ward Deanne Ward
11 hrs
Cathy Sweeney Very Sad.
9 hrs
Bette Grant We met Sharon on a very recent overseas and quickly became friends. Our condolences to Sharynnes family, colleagues and friends. Wonderful caring lady
8 hrs
Marlene P Wood Thankyou for sharing Annie, she truly was one of the best.
7 hrs
Jayne Kwiatkowski Rest in peace – a worthy life – such a caring lady – I remember her when I worked at police many years ago
3 hrs · Edited
Annie Piert R.I.P Shazz, the world is a better place, that you did live and a sadder place, that you did leave us

?
1 hr
As recipients of the Australian Police medal, the awards recognise their distinguished service.
Constable Sharynne Grant Constable Sharynne Grant joined South Australia Police in 1975 and worked in a range of operational areas before becoming a Victim Contact Officer in 2004.
For the past 20 years she has been committed to providing outstanding services to victims of crime and persons affected by trauma. She brings to the role a passion for service to victims and an empathy for them that goes beyond mere words of comfort. She has created special bonds, particularly with vulnerable
victims, and made herself available, at work and in her own time, providing practical and emotional support to families and victims of crime.
Constable Grant’s knowledge of procedures, processes, and services to victims and her commitment to assisting has been invaluable to investigators.
In 2009 Constable Grant was nominated for the South Australia Police Officer of the Year award. She has also been awarded life membership by Victim Support Services and was recently recognised as SAPOL’s longest ever serving female officer.
Please follow and like us: