Awards:  No Find on Australian Honours system, whoever:

Commended:  1956 for alertness and good policemanship displayed at Lidcombe on the 9 June 1956, in connection with the arrest of Henry Albert Jones, who was convicted of Break, Enter & Steal, Causing Grievous Bodily Harm and other offences.

1960 for the search for Kevin John Simmonds and Leslie Allan Newcombe, who escaped from the State Penitentiary, Long Bay Gaol, on 9 October 1959.

9 September 1965 commended for the part played in fighting the disastrous bush fires which occurred in the County of Cumberland during March of 1965. 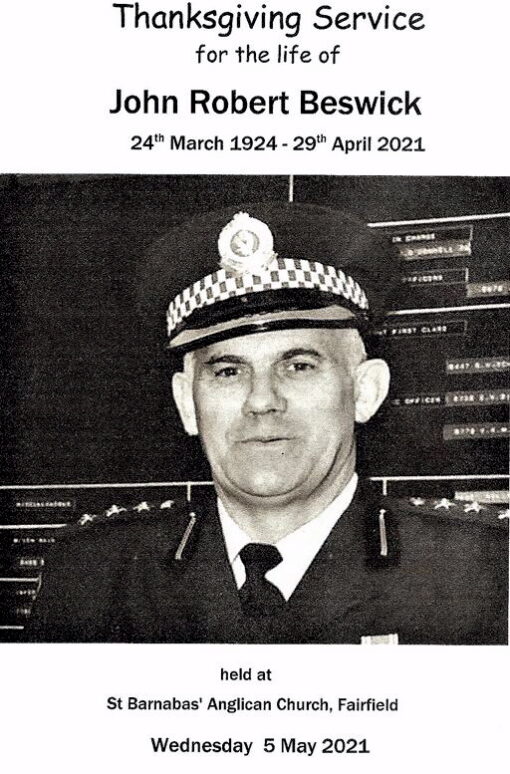 Relatives and friends of Jack are kindly invited to attend his Funeral Service to be held in it’s entirety Wednesday, May 5, 2021 at St Barnabas Anglican Church, Cnr Frederick & Lackey Sts, Fairfield to commence at 10am.

At the time of joining the NSWPF, Jack was described as:

He was Married at the time of commencement.

He held the School Intermediate Certificate.

Prior to joining, he spent 2 years as a Rural worker & 5 years as a Truck driver.

Jack obtained a mark of 93/75% at completion of Training Class # ? at Penrith Police College

He had a Bronze Life Saving Medallion

A car, after colliding with a woman, swerved, into a Far-western Division police wireless car on Woodville Road, Villawood, last night.

The woman, Mrs. Alice Mary Crawford, of Norton Avenue, Bankstown, was admitted to Parramatta District Hospital with shock and a deep laceration to her back.

The driver of the police car, Constable Jack Beswick, was kept under observation for an hour then allowed to leave the hospital.

Police later charged a man, with driving under the influence of alcohol.

Police in the patrol car said they were driving along Woodville Road towards Liverpool, when a car shot past them and hit Mrs. Crawford, who was walking on the right-hand side of the road with her husband.

The car then swerved to the left of the road, crashed into the patrol car and careered across a small ditch to a fence.

The woman’s husband, Mr. Frank Crawford, said: “My wife was jerked away from my arm and hurled about 10 feet in front of me.”

Robert Staniland, 5, of Delhi Street, Lidcombe, had his left leg fractured when he was knocked down by a car in Delhi Street yesterday.

The boy ran across the street in front of an ice cream truck and was hit by a car which was passing the truck.

The driver of the car, Ralph Kerr, 25, of Cooma, took the boy to Auburn Hospital, where he was treated. The boy was then taken to the Children’s Hospital, Camperdown.