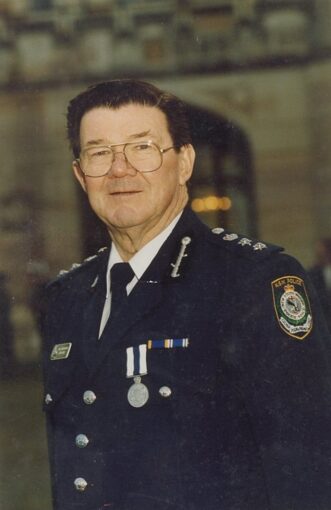 Devoted and loving father-in-law of JOHN and KIM, NARELLE and STEVE, LYNN and CHRIS, PETER and JULIE, and ANN.
Doting grandfather of BREE, DAVID, JESAMY, ELIZABETH, MATTHEW, KATHRYN, WILLIAM, AARON, BAYLEY, CONNOR, MADELYN, and partners.
Great grandfather of RYAN, EMILY, HUDSON, LACHLAN, NORA, ODI, IVY, LYLAH, KAIRA and HARLOW.
In lieu of flowers, donations to St Vincent De Paul society would be appreciated.
Out of respect for the family, we ask that those who are not double vaccinated not attend the service, but to view the live stream via the link provided.

Devoted and loving father and father in law of JOHN and KIM, NARELLE and STEVE, LYNN and CHRIS, PETER and JULIE, and ANN.

Full vaccination is required to attend.

The Service will be live streamed. For the link please visit the Fry Bros website, Funeral Services page.

In lieu of flowers, donations to St Vincent de Paul Society may be left at the church or made online via the Funeral Services page.