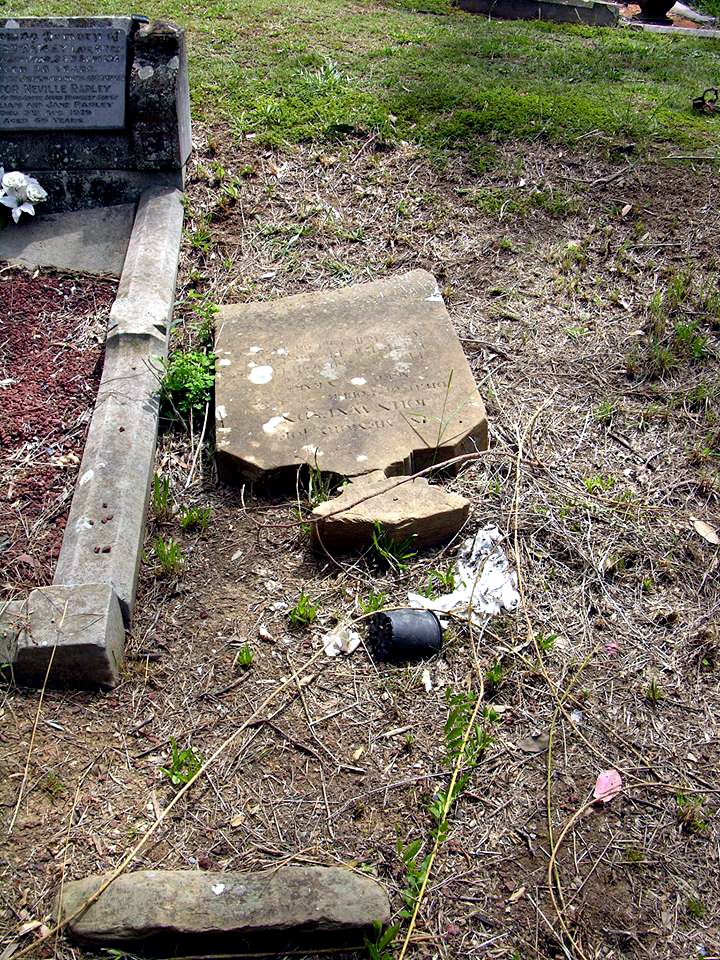 Sergeant Watson is thought to have died on 25 October, 1852 as a result of the onset of tuberculosis following an assault by a prisoner he was escorting to a police station.

Few details are yet known of the incident, however the Sydney Morning Herald of 24 May, 1860 when reporting on the death of Inspector Alexander McGee, included the following clue.

We are happy to say that we have been informed by the superintendent of Police that a pension to the widow [of McGee] of ” £50 can be afforded out of the Police Fund. It is a somewhat singular coincidence that this will be the second instance of relief from the Police Fund which Mrs. McGee will receive. She was formerly married to a man of the name of Watson, in the police force, who, while conveying a prisoner to the watchhouse, was so seriously kicked in the back that consumption was induced, and he speedily died. On that occasion the donation of ” £100 was paid to the widow out of the Police Fund. Still we think that some testimonial from the citizens in token of their approval of the gallant conduct of McGee is eminently due.

The sergeant was aged 26 years when he died and was apparently stationed in the Sydney Metropolitan Area.

The defendant did not deny the assault, for which he expressed his contrition. The bench sentenced the defendant to pay a fine of 2/., and 2s. 6d. costs, in default to be imprisoned during fourteen days.

The Height of Ingratitude. – Police constable Watson answered in the most lively and sonorous manner to his name when called upon to give evidence against William Byrnes, a stiff built nautical, for having inflicted divers kicks upon witness whilst engaged in affording him the protection of the law.

At the late hours on Saturday night Watson was doing his duty in O’Connell-street, when he saw the defendant levelled to the earth by a human fist.

Witness took the offender into custody; whereupon up rose Byrnes, and most ungraciously pitched into his Indigo friend, from whose grasp he rescued his antagonist. ” I am naturally mild,” cried Watson, ” but human flesh and blood cannot stand this. Come to the watchhouse.” ” Not I.” replied Byrnes, ” take me if you can.”

Watson sounded his whistle shrilly, but the Royal Civils did not start up around as did the clansmen – of Roderick Dhu – Watson was left alone with a very pretty little piece of work cut out for him. However, he tightened his belt, and went at Byrnes like a hero, and after a struggle of half an hour placed him carefully under lock and key.

The defendant had nothing to offer in explanation of his conduct but the police office cuckoo note – I was uncommon drunk – knew nothing of it – dare say he’s right – a man don’t like to be pulled and hauled about – did my best to prevent it, no doubt.

This plea was held insufficient by the P.M., who fined him in forty shillings and costs for base Ingratitude to his protector.

The Court of Petty Sessions for considering applications for Publicans’ Licenses, adjourned from the 30th of last month, resumed its sittings yesterday.

The Right Worshipful the Mayor presided, and was assisted by the following Justices. The Police Magistrate, the Superintendent of Police, Messrs. Allen, Hill, Chambers, Moriarty, Mitchell, Brenan, Grant, and Brown.

George Snell Clark, applied for license for the Horse and Jockey, in Hunter-street. Mr. Cory appeared for the applicant, who was opposed by Inspector Holmes, for having, on the 14th of February, refused to assist a constable in the City Police, named John Watson, who had a prisoner in custody at the time, and which prisoner was rescued from his custody by a person who assaulted constable Watson, and inflicted severe injuries upon him. The objection further alleged that when a pair of handcuffs were handed to Mr. Clark to assist in securing the prisoner, he threw the handcuffs down on the ground.

Constable Watson related the facts of the case, and said that he had been unwell ever since the night the assault was committed upon him. In reply to a question put to him by Mr. Cory, Watson admitted that Mr. Clark had picked up his truncheon for him, Mr. McLerie stated that no complaint was made against the manner in which the applicant had hitherto conducted his licensed house, and he would therefore consent to withdraw, the objection, which had been raised to let publicans plainly understand that they were bound when called on in similar cases to render aid to the Police. The objection was then withdrawn, and the license granted.

Camden General Cemetery is located on the corner of Cawdor and Burragorang Rds, Camden & was established in the late 1800’s.

The above information may have been contaminated with some of the below dates.

Sergeant Watson is thought to have died on 25 October, 1852 as a result of the onset of tuberculosis following an assault by a prisoner he had removed from a hotel in Sydney.

On or about the 21 January, 1852 Sergeant Watson and Constables Clifford and Clarke attended the Lemon Tree Hotel and were asked by the proprietor to remove a man from the premises after he had refused to leave until he was served another drink.

The police were forced to drag the man from the premises and a hostile crowd soon formed outside to witness the ensuing brawl.

ASSAULTING THE POLICE
Robert Thompson appeared to answer the charge preferred against him by Sergeant Watson, for assaulting him in the execution of his duty, in Phillip-street, between the hours of nine and ten o’clock, on Wednesday evening. The defendant bore evident marks of ill-usage, his eyes being severely bruised.

Mr. Cory appeared for the prosecution, Mr. G. Wright, as amicus curia attended on behalf of the defendant.

It appeared from the evidence of Watson and two other constables that the son of Mr. Tuohy, a publican in Phillip-street, called at the St. James’ station-house, requesting the police to eject the defendant from his father’s house, as he was conducting himself in a disorderly manner.

Sergeant Watson went with two constables to Mr. Tuohy’s house, and defendant was ordered to quit, which he refused to do.

The policemen then ejected defendant from the house, and ordered him to go home. He refused, and caught hold of Watson by the legs, and endeavoured to throw him down.

Several witnesses were called for the defendant, who testified that the policemen ill-used the defendant after the arrest, and that they beat him while conveying him to the watch-house.

The defendant was fined one shilling, and half-a-crown costs, which he immediately paid.

The offender later took civil action against the three police officers, who were defended in court by a Mr Nichols, who said in their defence, “The constables were human beings, and situated as they were, with a mob of upwards of one hundred people surrounding them, and calling out to them to let the man go, must naturally have been excited…

One witness had sworn that a constable waved his stick, and threatened a person in the crowd, but he would call a witness to prove that that constable had no stick with him…

The now complainant had been charged with assaulting a constable, one of the now defendants, and has been convicted and fined…

In conclusion, I would remark that the defendants were duty bound to apprehend the complainant, and they used no more violence than was necessary to take him.”

The hotel proprietor, a Mr Tuohy gave the following evidence during the hearing.

I am a publican residing in Phillip-street. On the night of the late Mayoral election the complainant was in my house between the hours of eight and nine o’clock.

I saw the constables, the three defendants, at my house.

My son went for them, in consequence of Mr. Thompson using threatening language, and saying that he could beat me, and my whole family.

Sergeant Watson told the complainant to go home with his wife. Complainant asked the sergeant if he knew his duty, and told him that his duty was outside instead of inside. I desired the constables to put complainant out of the house, as I was in dread of him. They again requested him to go home, which he refused to do. I was afraid he would do me some injury, because I had refused to draw more liquor for him, and again told the constables to turn him out. They took hold of him quietly, and he rushed against them, and tried to shut the door. They forced him outside, and then twice told him to go home. He replied, that he would remain there as long he liked. When down, he took the sergeant by the legs and the constables tried to loosen his hold. The sergeant caught hold of one of the verandah posts, to save himself from falling.

Thompson’s conduct was violent. I saw him kick when down outside my door. I could not say who he kicked at. I do not think the constables used more violence than necessary during the time I saw them.”

The matter was dismissed by the magistrate.

The sergeant was aged 26 years when he died and was stationed at the St James Police Station.