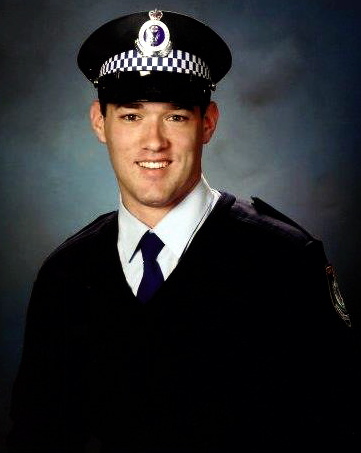 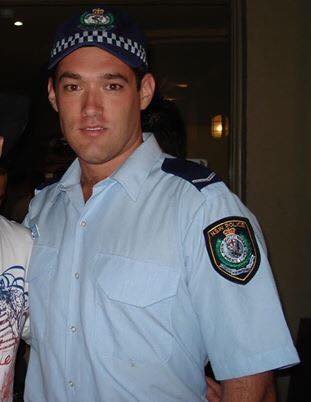 Morgan commenced his shift at Waverley Police Station at 8pm on the evening of 27 March 2009.

At 8.39pm, at Fisherman’s Road, Malabar, in his private vehicle, Morgan ended his life whilst suffering severe depression induced by the effects of anti-depressant medication he had been prescribed.

He was 26 years of age at the time of his death by suicide and stationed at Waverley, Eastern Suburbs Local Area Command.

* Stemming from the continued work of the wives of four Fallen NSW Police to Suicide – those four names will now be included in the newly refurbished NSW Police Wall of Remembrance, Sydney, as of 2017

7 years ago this Easter Sunday, on 27 March, we lost our only brother and son, Morgan Hill. He took his life on duty that night. I would never wish this type of grief on another family. What has made it worse than losing Morgan though is being subjected to the stigma attached to suicide. With every year that goes by this is reinforced by NSW Police that Morgan’s death (and many before and since) are not worthy of the respect they deserve, because of HOW they died. But…we will continue to highlight this injustice and the shame is not on Morgan or our family…it is actually on YOU – the high ranking officials of the NSW Police Force – and leaders of any Force – that perpetuates this stigma by specifically excluding them from your Wall of Remembrance!

The response, from the Commissioner of Police, to the above Coroners report:

“The NSW Police Force established a Self Harm Prevention Advisory Panel (the Panel) in 2010, following a recommendation of the Deputy State Coroner Dillon in 2009 arising from the death of Sgt Ian Muir. The role of the Panel was recently reviewed and amendments are currently being made to its charter to oversight the NSW Police Force response to Recommendations in all coronial matters involving self-harm by police officers.”

Twenty six years old that day
the sun refused to shine.
On a back street in Australia
in the year two thousand nine.

Haunted by his killer
named PTSD.
He longed just for peace of mind
he longed to just be free.

He told them of the pain inside
it hurt too much to bear.
They put him on restricted duty
to show how much they care.

They followed their procedure
and showed him what they think.
He could return to work again
once cleared by their shrink.

Just a short time later
from all he had endured.
Glory hallelujah
the shrink said he was cured.

Just four short days later
he could not bear the load.
He parked his car in silence
just right off the road.

He should have been dreaming dreams
of children or a wife.
The sun moved quietly behind the clouds
and Morgan took his life.

The bright eyed little boy they knew
his sisters there were four.
Left with such an emptiness
not like it was before.

So they do the best they can
they loved him like no other.
But not a day passes by
they don’t think about their brother.

I’d just like to say that it’s my hope sometime down the road after Code Nine has met with much success and people are being helped instead of silenced. I hope I never have to write another poem like this again. Because ending stories like this is what they’re all about. Please remember Mr Hills family and friends in prayer and ask that they be comforted by the memories they treasure. And not haunted by the way his life so suddenly ended. Thanks to all of you for praying. Sincerely Edwin C Hofert

This poem is one of a series of poems written by me for Code Nine Officer Needs Assistance And is intended to honor the fallen officers and their families that are to be featured in the finished documentary. As well as all others.

To learn more about Code Nine and their efforts to fight against PTSD go to
https://www.facebook.com/profile.php…

Awarded for outstanding bravery and devotion to duty as a member of the New South Wales Police Force response to civil disorder within the Miranda, Eastern Beaches, St George, and Campsie Local Area Commands.

On Sunday, 11 December 2005, a protracted public order management policing operation commenced in response to a major civil disorder situation in the Cronulla area.  The ensuing violent civil disorder continued in Cronulla and other areas, including Maroubra, Brighton, and Campsie, until Tuesday, 13 December 2005, when the situation was brought under control, with peace and good order restored by members of the Force.

The dedication and devotion to duty rendered by these police who were on the frontline throughout this protracted and dangerous policing response and operation exemplifies the courage, expertise, professionalism and commitment of the New South Wales Police Force.

While protecting members of the community and property from rioters, officers were subjected to various forms of assaults and missile attacks.  These members of the Force, many of whom sustained injury, remained steadfast in the performance of their duty.

Constable Hill warrants due recognition for his courage and meritourious service during this period of civil unrest and thus is highly commended.

‘Despite the above Commendation being dated 18 September 2008 ( 6 months before Morgan’s death ), the Certificate was handed to the family Posthumously on the very same day that they were also handed documentation stating that Morgan was NOT going to be mentioned on the Wall of Police Remembrance due to the fact he suicided.

These documents were not given to the family until late 2010.’

I find that Morgan Hill who was born on 25 January 1983 died at Fishermans Road Malabar NSW at about 8.39 pm on 27 March 2009 of a gunshot wound to the head, self inflicted while suffering severe depression.

That a psychiatrist or psychiatrists be employed in the Health and Well being Unit of Welfare Safety Command or retained so as to ensure qualified psychiatric oversight of all police fitness assessments where mental health or emotional stability are an issue.

3. In particular, that the criteria so developed and established provide that fitness for duty and to carry a firearm is not merely a matter of the absence of a diagnosable psychiatric condition or mental illness.

4. That police medical officer be encouraged to explore with police officers referred by commanders for a fitness assessment the history of that officer and any current or recent medical diagnoses and treatment plan or plans and the identity of that officer’s medical practitioner and to seek the consent of the police officer to that medical practitioner providing appropriate medical information to the police medical officer and that unwillingness to provide that consent be among the matters to be reported to the referring commander.

5. That psychologists assisting in the preparation of fitness assessments be accorded independence from police medical officers.

6. That police medical officer be reminded of the provisions of the Health Records and Information Privacy Act 2002 and, so far as the provision of information to commanding officers is concerned, be encouraged to act in accordance with its terms.

7. That the practice of placing reliance on psychological tests in the preparation of fitness assessments be reviewed by an independent expert.

8.  That the freedom of commanding officers to make their decisions as to the removal or restoration of firearms informed by considerations other than those dealt with by police medical officers be encouraged.

9. That commanding officers be reminded of their entitlement to the provision of information pursuant to the Health Records and Information Privacy Act 2002.

10. That consideration be given to the establishment of a mentoring system of young officers by more senior officers with a view to the guidance, support and oversight of the performance of those young officers.

“The NSW Police Force established a Self Harm Prevention Advisory Panel (the Panel) in 2010, following a recommendation of the Deputy State Coroner Dillon in 2009 arising from the death of Sgt Ian Muir.

The role of the Panel was recently reviewed and amendments are currently being made to its charter to oversight the NSW Police Force response to Recommendations in all coronial matters involving self-harm by police officers.

”Please click here to link to a table which sets out the full Police Force response to the recommendations made by Coroner Mitchell. (Unavailable)

Denise Hodder This is hideous that these precious lives are lost and no one in power seems to care ….?

Clare Heiss I can tell you, as Morgan’s sister, whom attended this inquest for the two weeks duration it ran, that our family have not once heard about any follow up to these recommendations. Furthermore my parents were invited to be on the “self harm committee” when it began, BEFORE the inquest mind you, but attended maybe two meetings and as far as we know either does not exist anymore or is called something else, but either way we have not been asked to continue to be a part of the panel in terms of reviewing the recommendations made by then Coroner Scott Mitchell (now deceased) nor any ongoing consultation as a family who have lost a police officer to suicide.

Barbara June Sounds like a continuing disgrace of the well known…. I am sorry for your families sad sad loss Clare Heiss….

Janet Hill We were invited to present at the inaugural Self Harm Prevention Committee in Dec 2009.

Berrick Boland What happened to the so-called committee now?

Dimmy Nicholson It’s just mind numbing to think despite these findings your family have not been kept up to date regarding any changes!!!! ???

Dimmy Nicholson Clare Heiss exactly my point!! That’s why no contact because there is no changes 🙁

Barbara June Continuing to be continued!

Kimberley Galvin The panel.. As its called.. Please show me any person who knows who was on it? Or been contacted by the ( panel)

Derek Smith Disgraceful they are! ?? Sorry for your losses.