Cause:  Murdered.  Shot through neck during arrest

Memorials:  1/  Chifley LAC has the ‘ Paul Quinn Award ‘ for the most outstanding Officer each year.  Paul is Remembered within the Chifley LAC.

PAUL is mentioned on the Police Wall of Remembrance 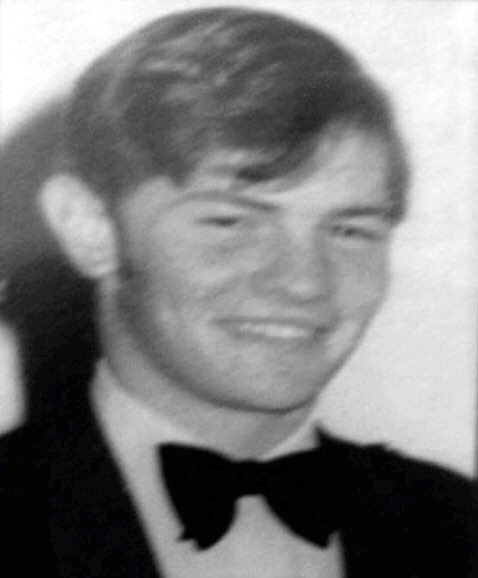 Late in the afternoon of 30 March, 1986 Constable 1st Class Quinn was involved in the high speed pursuit of a vehicle from South Bathurst towards Perthville.

At Perthville the offender lost control of the vehicle and collided with a bridge railing at the intersection of Bridge Street.

The offender then leapt from the vehicle with a .303 rifle and began to fire at the police who had been chasing him.

Constable Quinn was hit in the neck and killed instantly and Constable Ian Borland was seriously wounded.

The sergeant was born in 1960 and joined the New South Wales Police Force as a Cadet on 4 July, 1977.  At the time of his death he was stationed at Bathurst.

Other Police who assisted with this incident at the time of the shots being fired were Senior Constable John Andrew BYERS  BM.

Chifley LAC has the ‘ Paul Quinn Award ‘ for the most outstanding Officer each year.  Paul is Remembered within the Chifley LAC.

The day Constable First Class Paul Quinn was buried with full police honours, his daughter Rebecca turned four. After a funeral that closed streets in the policeman’s home town of Bathurst, his five-year-old son, Chris, was still asking relatives when Daddy would be coming home.

Yesterday the siblings sat together in distress again as the man who killed their sole-parent father was declared ready to return to the community after serving almost 18 years in jail.Chris has had trouble with the law, but has shown talent as a lightweight boxer. Rebecca runs a coffee shop and turns 22 in a couple of months.Supporting them was Inspector Ian Borland, who was seriously wounded the day Constable Quinn was killed and still works in Bathurst near where the pair encountered Patrick Francis Horan on Easter Sunday 1986.The policeman and the Quinn siblings had been told Horan would be granted parole at his third attempt, but the decision moved Chris to climb over the public gallery and storm out the Hospital Road courtroom door.Weeping outside, he was embraced by Inspector Borland, who still has bullet fragments in his body.Inspector Borland, the Quinns and the NSW Police Association wanted to keep Horan, 63, locked up until he was dead.John Watts, for Inspector Borland and the Quinns, had argued that Horan‘s lack of insight into his psychiatric problems and his refusal to acknowledge he had been the aggressor when Constable Quinn was killed made a “potent mix”.But the Parole Board found Horan, a paranoid schizophrenic, was unlikely to pose a risk to others if he took his medication and that “the jail system is not a substitute for the treatment of people suffering from mental illness”.Horan‘s prison behaviour had been exemplary and he successfully completed unsupervised work release. He had the family support of a brother and was engaged in “the admirable hobby of bee-keeping”, the board found.Horan had not been taking his medication when his mother called police about his erratic and violent behaviour on the afternoon of March 30, 1986. One of the officers to respond to the call was Constable Quinn, then 25 and on duty at Bathurst for only his fifth shift since being transferred from Casino, to be near his parents.After a pursuit that ended 10 kilometres south of Bathurst at Perthville, Constable Quinn got out of his car and ran towards Horan, who shot him in the left clavicle with a .303-calibre rifle.The officer’s colleagues returned fire as Horan adopted what he described as a Rambo position and emptied the 10-round magazine in his .303.Constable Borland, then 36, was shot in both legs and a hand, while Horan, who was hit by at least seven of 18 shots fired by police, continued shooting at five other officers.Constable Quinn was posthumously promoted to sergeant.In the Supreme Court sitting at Bathurst, Horan pleaded not guilty to murder but guilty to manslaughter on the grounds of diminished responsibility due to mental illness.Justice Kep Enderby sentenced him to life, with separate terms for wounding with intent to murder Constable Borland and shooting with intent to murder other police.In March 1998 Justice Peter Hidden set a minimum term of 16 years, which expired in 2002, and a maximum of 22. The crown did not appeal.Horan will be released next Wednesday, under conditions that include his accepting psychiatric treatment and not entering Chifley Local Area Command, where Inspector Borland works.http://www.smh.com.au/…/2004/01/13/1073877830354.html…