The first body of Mounted Police in Australia was formed by Governor Brisbane on the 7th September, 1825.

After the amalgamation of the various Police bodies throughout the State in 1862, the Headquarters of the Mounted Police was established at the Belmore Barracks, now the present site of Central Railway Station. Then, in 1907, after temporary occupancy of premises at the Sydney Showground, were transferred to the Police Depot, Bourke Street, Redfern. Today, the Mounted Section is the only remaining Police Station in New South Wales continuing Mounted Police, which is the oldest continuous Mounted Police Unit in the world. 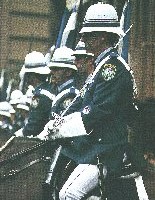 The Officer in Charge prefers to select unbroken horses, all geldings, bay in colour, and showing some thoroughbred qualities. The type of horse purchased must stand 15.3 hands, be free of blemishes, have a good intelligent head and be between three and five years of age. Of the 30 horses attached to the Section, there are a number of ex-race horses which have been presented to the Police Force and all have given an excellent account of themselves whilst carving out Mounted Police duties.

A young untrained Police Horse is first, taught to tie up, lead on foot and lead from a horse. His education continues through various stages until he is able to be ridden and walked around with quiet troop horses. Later, he is taken to Centennial Park where, in the company of well trained troop horses, he is taught to drill. During his training, the young horse is taught to walk, trot and canter correctly, to rein back, side passage, and most important of all, to stand still

The basic training of the average horse takes about nine months, divided into three periods, i.e., firstly, to develop his physical power to make him quiet and to teach him to move forward freely; the second phase is to make him balanced and collected and obey the various aids quickly, and the third phase is devoted to training him to go quietly whether in front or behind or alongside other horses.

The new horse is ridden with an experienced horse in traffic around the city and inner suburban areas or any place where he is likely to be used at a later date. The first of official duty of the new Police horse is Street Patrols in the Redfern area.

At present there are 31 personnel, attached to the Mounted Section, and all applicants must pass a test in horsemanship. after completing an induction course at the Police Academy Goulburn, trainees are sworn in as Probationary Constables. They are then assigned to a Patrol Station for 2 years.

Applicants can apply for the assessment riding test after completing 12 months at a Patrol Station.

When Constables transfer to the Mounted Section they are instructed in the care and attention of horses and saddlery, riding skills, equitation and lance drill. All Constables receive Mounted Drill instruction at Centennial Park, which forms the basis of the Musical Ride conducted at the Royal Easter Show and other shows. During their training, Constables receive instruction on basic Mounted Police Duty and Traffic Control.

All constables are responsible for the care and maintenance of their own saddlery and the grooming of their individual horses. In addition to this, they also maintain the cleanliness of the stables. One day weekly is devoted to training of horses and personnel with Instruction given in troop drill, crowd control, escort duty and various equestrian skills as well as police procedures.

The Mounted Police perform Park Patrols in Centennial Park, Hyde Park, The Domain and Mrs. Macquarie’s Chair; and Street Patrols in the Rocks, Millers Point, Kings Cross, Woolloomooloo, Darling Harbour and Redfern areas of the City of Sydney, on a regular basis. Also patrols are carried out in the Suburban areas of Manly, Bondi, Cronulla, Liverpool and Parramatta. All the above patrols are performed during daylight hours and into the evening with the late shift concluding at 1.30am. Patrols are conducted in “pairs”, with both Constables being equipped with Portable Radios. Mounted Patrols have been highly successful because of their mobility and elevation, and involve all areas of Police duties from the arrest of offenders to charging, and subsequent court appearance.

The Mounted Police are available to assist General Duties Police on “Special Operations, in the City of Sydney, Suburban areas and Country areas of NSW. These operations consist of :-

Operational Duties consist of at least 80% of the duties performed by the Mounted Unit.

The Mounted Police perform Protocol Engagements consisting of leading processions or parades (i.e. Anzac Day March, Tickertape processions, etc.), and State or Police funerals. Mounted Escorts are provided for members of the Royal family, the Governor General, the State Governor and various other V.l.P.’s on such occasions as the opening of Parliament, opening of Major Agricultural Shows, and attendance at major social or sporting fixtures.

The lances carried by Mounted Police, whilst on parade were presented to the Troop in 1957 by General Carriapa, High Commissioner for India.

The Mounted Police perform the Musical Ride at Sydney shows and at larger country shows. The musical ride consists of a series of precision drill movements performed in time to the music of the New South Wales Police Band, over an area measuring 100 metres by 50 metres and is of approximately 20 minutes duration. This exhibition has received acclaim from many overseas visitors and is considered to be one of the most spectacular rides in the world.

A vaulting exhibition is a feature of many displays performed by the Mounted Police annually, throughout the State. The routine is gymnastics on horseback and requires physical fitness and co-ordination, which develops good balance for riders.

Excursions by various groups (i.e., Pony Clubs, Schools, Senior Citizens, Guides Scouts, etc.) may be arranged by conducting the Officer in Charge. Specific days are allocated for this purpose, with as many as 800 per day. The average annual attendance is in excess of 10,000.

The excursions are in 2 phases:

The New South Wales Police Force is very proud of the Mounted Section, an efficient support unit in operational duties, and an imposing and spectacular sight on all ceremonial and Protocol engagements, promoting a valuable Public Relations image.

What type of saddle is used for training the horses? And is the same saddle used for crowd control duties?

I would like to know the history of the Lances carried by the NSW Mounted Police. The Reserve Forces Day Council are having 2 police in the Guard of Honour for VIPs at a Parliament House Lunch, 8th October 2020. It would be a point of interest to announce as they march into the dinning room. Malcolm Botfield function RSM.

Not sure if this is the right place, but I have a 6yo OTT gelding 16.2/16.3 that might make a useful police horse. I’m happy to donate him, he has a very quiet temperament and moves quite nicely but in truth he’s just a bit big for me. Located Newcastle area.

I was incredibly disappointed to find that the Mounted Police in Adelaide use spurs when riding. A trained rider should be skilled enough that when riding on a highly trained horse should not have to resort to such a medieval practice. The officers were not performing any crowd control, but walking down quiet streets on a Sunday evening. I watched as the female officer dug her spurs in, and maintained this for an extended period of time, into her perfectly behaved horse whilst crossing at a traffic light, with absolutely no urgency. I was terribly saddened.

Hello, I would like to offer a retiring mounted police horse a well deserved home. I have a big property and the time to look after him/her. Who do I contact in order to put my name on the list? Thank you

My name is Jaime Guerra, I am inspector student in National Academy of Police in Avila (Spain). Days before I contacted with your embassy in Madrid who helped me and provided this web to contact you. Actually I have started my Master’s thesis about “ The use of horses in the police”, one of the reasons why I chose this subject was that I had been officer training in police mounted here in Spain in Seville during ten years, but there are few information and Knowledges about the different corps and horse units in different countries, whether in the web… Read more »

How old do you have to be, to be a mounted Police Officer?

Does the Mounted Section have its own dedicated equine physiotherapist, are all such services outsourced to commercial veterinary or equine practices?