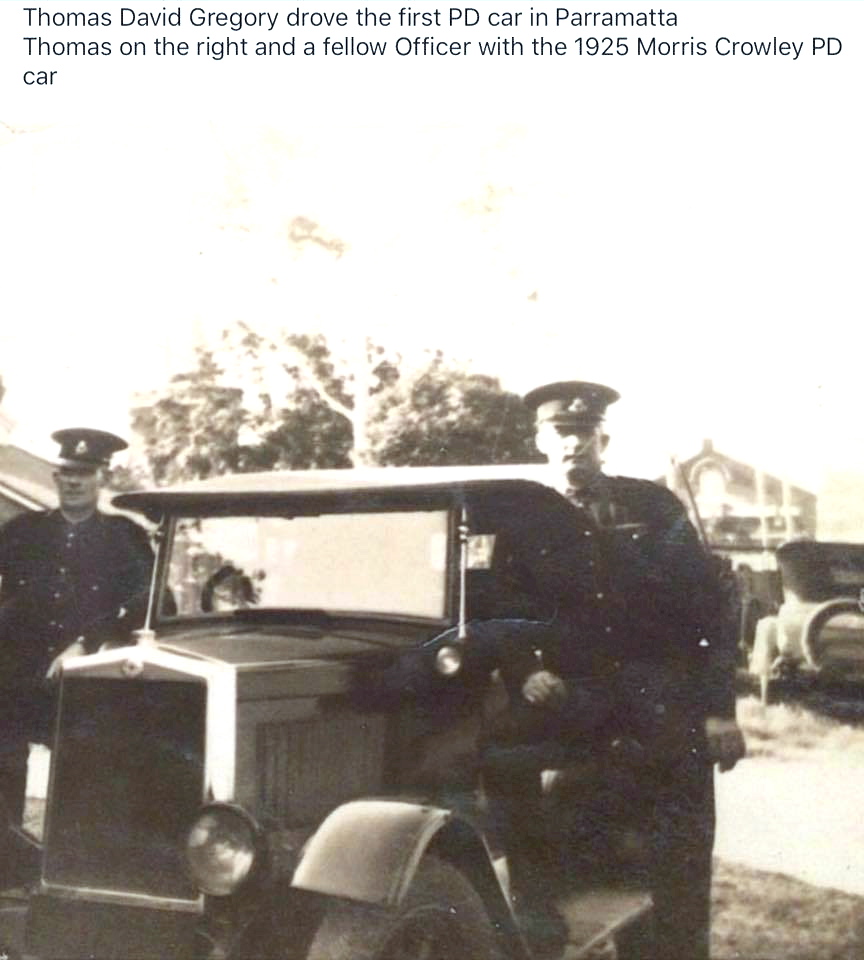 A former policeman, who drove the first ‘PD’ car ever used in Parramatta, died recently after nine years’ retirement from the force.

He was Constable First Class Thomas David Gregory ( 68 ) and he is survived by his wife and two married sons and daughters. Many senior police officers joined the guard of honour outside All Saints Church following the funeral service.

Constable Gregory, who served for many years in Parramatta and Dundas, retired from the force in 1953 after 32 years service.

A returned soldier from World War I, he was popular with children throughout the district for his care and attention while directing traffic at the city’s busiest intersections.

A former fellow – officer said yesterday that Constable Gregory was one of the most popular officers ever to serve in Parramatta. He said Const. Gregory was a familiar sight throughout the district driving a ‘bullnozed’ PD car in 1925.

Const. Gregory was later transferred to duty in Parramatta Court House, and on his retirement, tributes to him were paid by Judges, Senior Counsel and other members of the Bar. His death came as a blow to the hundreds of people who knew him during his police service and since his retirement.

A long guard of honour of friends and former fellow officers stood in respect as the cortege left from his Grose Street home. Rev. O. Crawford conducted the service at All Saints Church, and later at the graveside in St. Paul’s cemetery, Carlingford.

Constable Gregory’s promptness and presence of mind averted what might have been a fatal crash In Church-street, Parramatta, early on Sunday morning, when a stolen car, travelling at over 70 miles an hour, swerved in front of the Parramatta Police wireless patrol car.

Constable Gregory, who was driving the wireless car, turned quickly to avoid a collision. A front tyre blew out and the car, getting into a broadside skid, ran on to the footpath,knocked down a fence and finished up in a hedge.

The accident occurred after the two cars had crossed Lennox Bridge. The driver of the stolen car, who was accompanied by a man and a woman, swerved in front as the police drew abreast.

Despite the high speed at which it was travelling, the patrol car received relatively small damage. With Constable Gregory were Constable Tompkins ( operator ) and Detective Booth.

When one of two men failed to stop after being challenged by the police in Sydney-road, Granville last night, Constable Gregory fired three shots, one of which struck a fugitive in the left knee. The man was conveyed to the Parramatta Hospital, and admitted. The other man made no attempt to escape when the police made their challenge. Subsequently both men were charged.

The police visited a house in Auburn and recovered £300 worth of property, alleged to have been stolen.

Thomas David Gregory was born in 1893 in the Queanbeyan district on NSW. Some sources, including his enlistment papers, state his name as David Thomas Gregory although birth and baptismal records give his name as Thomas David Gregory. His grandfather and father were rural workers at properties around Duntroon and Tharwa and Gregory is associated with Royalla, NSW where he too was a farm labourer.

Gregory enlisted in April 1916 with the 56th Battalion and joined his unit near Flers in France in February 1917. The 56th Battalion fought at Louverval and Bullecourt during April and May 1917. Gregory was gassed at Polygon Wood in Belgium in September 1917. He rejoined the 56th Battalion in June 1918 and was wounded three months later at Péronne on the Somme River where he was shot in the ankle, leg and forearm.

After the war, Gregory worked for a few months at the Royal Military College, Duntroon before applying for a Soldier Settlement block. In his application, he indicated he wanted to graze sheep, that he was single with no dependents and that he had £250 in capital.

Gregory was granted the lease on Woden Block 110D of 208 acres (84 hectares), one of the smallest blocks in the District of Woden. Jerrabomberra Avenue (now the Monaro Highway) boarded the block on the west and Narrabundah Lane on the north. The lease began on the 3rd April 1920 for 25 years at an annual rental of £50/10.

The Commonwealth never intended for anyone to be able to make a living from Woden Block 110D; Gregory certainly didn’t. He applied for an advance of £168/15 to buy 150 ewes as well as funds to build fences worth about £35. However, it seems that Gregory did not stock his block but sublet it, as he wrote in 1922, “for 2 years to Messrs Hardy and Reid.”

By 1922, Gregory had moved to Parramatta, NSW where he married and also joined the New South Wales Police Force. William Harris, a neighbour at Jerrabomberra, looked after the block on Gregory’s behalf. He held onto Woden Block 110D until May 1931 when he transferred it to another neighbour, Hector McIntosh, who in turn sold it to Hugh Read in 1934. Thomas Gregory retired from the NSW Police in 1953 as a Senior Constable and died on the 31st March 1962 in Parramatta.