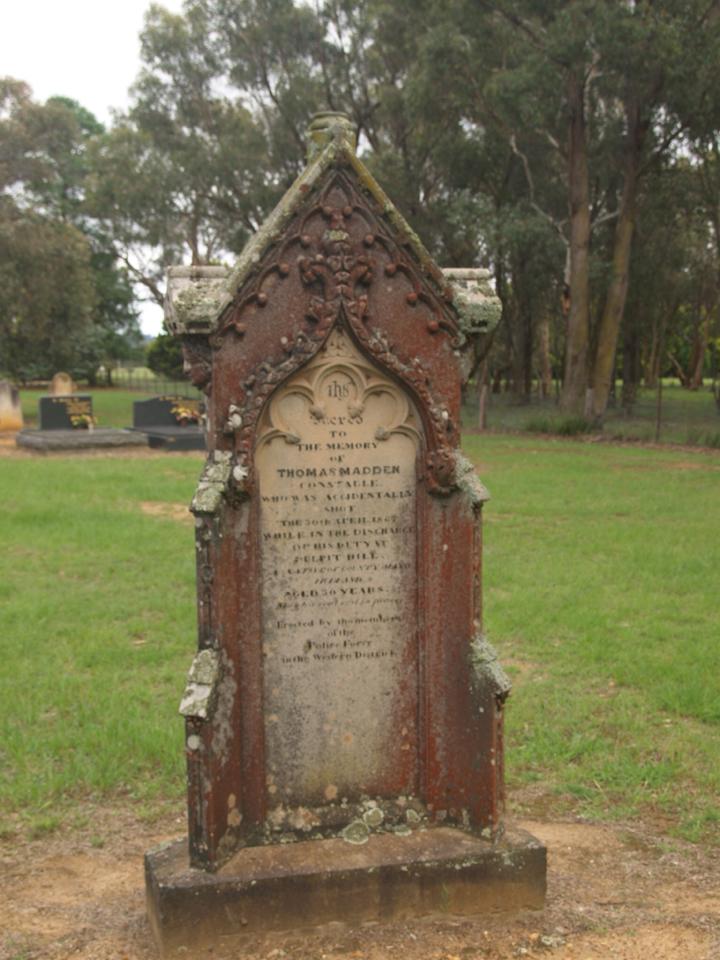 On the 29 April, 1867 a party of eight police led by Sergeant Walter Casey camped at Pulpit Hill (near present day Katoomba) with fifteen or sixteen ‘heavily ironed’ prisoners they were escorting from Bathurst Court to Darlinghurst Gaol.

The Sydney Morning Herald of 14 May, 1867, page 3  gave news of the inquest into the death of Constable Madden.

INQUEST ON THE BODY OF CONSTABLE MADDEN.

At the inquest held by the District Coroner, at Hartley, on view of the body of the unfortunate deceased Constable Thomas Madden, who was accidentally shot by Sergeant Casey while resisting the attempt of prisoners to escape from the lockup at Pulpit Hill, depositions were taken.

On the 29th April I was in charge of an escort of fifteen prisoners en route from Bathurst to Sydney ; that night the escort stopped at Pulpit Hill lock-up, I was on guard over the prisoners from 7 to 10 p m ; and was relieved by constable Duggan, who was on guard from 10 to 12, when he was relieved by the deceased, who remained on guard from 12 to 2a.m. of the 30th instant, Constable Hitchcox had to relieve him then.

After I was relieved from guard by constable Duggan, I laid down on the sofa (marked A in the plan), and had my revolver loaded on the window sill at hand ; anxiety kept me from sleeping, and I conversed with every sentry ; at twelve minutes past 2 a.m, deceased called Constable Hitchcox from an adjoining room ; deceased then said, ” I will look to see that they are all right,” immediately after this, the prisoners, led by Rutherford, Holmes, Moran, Smith, Southgate, and Kerr burst into the front room, out of the cell (C), and through the door (B), I jumped up, seized my revolver, and fired at the prisoner Moran ; he appeared to fall, I then fired at Kerr, who sang out, I fired at Kerr, who was rushing at deceased ; Kerr fell, I then fired at Southgate, who had hold of deceased ; the pistol hung fire , Southgate was not hit ; I fired again at one I supposed to be prisoner Holmes, I believe that something was put over the lamps very soon after the rush ; I found a blanket and a prisoner’s jacket on the table after all was over ; as the room seemed to get very dark after the two first shots ; it may have been caused by the smoke ; after I had fired five shots, the prisoners all but two ran into the cell, these two, who were Holmes and Rutherford, ran out of the front door (D), taking the direction of G and F ; I followed Holmes, and snapped the pistol at him ; it did not go off ; I then ran in and shut the door on the prisoners, who were in the cell at the time senior-constables McArthur and McNanamy and other police ran up from the barracks ; McArthur told me that Madden was shot in three places, and that the prisoners must have a revolver, I said, ” Than they got Madden‘s,” I said three or four of the prisoners are shot. I then looked at Hitchcox‘s revolver, it was not discharged, nor was any other of the police revolvers but my own, which had been fired five times, I then said, “Oh, my God! I must have shot poor Madden,”

I went up to the barracks, and saw deceased ; he complained of pain in his bowels ; I said, ” Oh, Madden it was I shot you,” he said, ” No, it was the prisoners,” I said, ‘ No, it was me, as no other revolver was discharged,” he said then, “If it was, I forgive you ; I know you did not do it on purpose,” and shook hands with me. I was so overcome at the thought of shooting my comrade, I do not know what I did, I believe I fainted.

I saw in the afternoon that prisoner Moran and Kerr were each wounded in two places – Moran on the breast and in the thigh, and Kerr having a graze on his head and a severe wound through his right arm.

When I went in, Moran said:, “You b—— butcher, if I had a revolver I would have got away ; I would as it was but for the sergeant.”

I was standing on the sofa when I fired, and the deceased was struggling with the prisoners ; my revolver has six chambers ; one chamber had two round bullets in it, one of which struck Moran on the left breast ; it is usual to see if the prisoners are all safe when changing guard ; the whole affair did not last more than five minutes ; I have been about eleven years in the police, I think Kerr had hold of deceased by the throat ; Kerr was shot through the right arm, and deceased on the left side ; I believe deceased was trying to keep prisoner from me and the door ; the property found on deceased consisted of £7 16s 3d and a silver watch and chain.

Thomas Hitchcox sworn: ” I am a constable stationed at Pulpit Hill, on the morning of the 30th April I was called shortly after 2 a m to relieve the deceased constable Madden, who was on duty guarding fifteen prisoners in the Pulpit Hill watch-house. When I came out of my own room sergeant Casey was lying on a sofa, after I had been out of my room a few moments, constable Madden said, “I’ll see if the prisoners are all right ”

He took the padlock off and drew the bolt, immediately, the prisoners rushed the door open and I believe knocked deceased down ; at least l lost sight of him ; prisoner Rutherford sprang at my throat, with, I believe the intention to get at Sergeant Casey‘s revolver, which was lying on the window ; I got away from him ; he followed me, and got hold of me a second time ; I then got away ; sergeant Casey jumped up and commenced to fire his revolver at the prisoners. Rutherford again caught me by the throat ; I had great difficulty in getting away from him ; I rushed into my bedroom ; got out of the window ; and went to the barracks to call the escort, who were sleeping in the barrack room, and to get arms, as the prisoners were between myself and my own ; I believe had not sergeant Casey fired as promptly as he did we should have been disarmed ; and the prisoners would have escaped ; my revolver was hanging behind the cell door ; the place where I generally keep it,

Sergeant Casey was standing on the sofa when he fired.

Daniel Murray O’Hara being duly sworn said I am a duly qualified medical practitioner residing at Hassan’s Walls, I have this day made a post mortem examination on the body of Thomas Madden ; there were no external marks of violence on the body, except three punctured wounds ; one on the left jaw in front of the ear, one on the left shoulder blade, and one on the left side, between the ninth and tenth ribs ; these three wounds are gunshot ; where the ball entered I found the ball that caused the wound on the jaw had passed through the lower jaw blade fracturing it and wounding parts inside the jaw, viz muscles etc, and passing through the roof of the tongue in which I found the ball lodged in its substance ; on the right side the bone had split the ball, and one small portion was found immediately inside the left jaw bone, and the principal portion on the place stated, with a small portion of bone adhering to it ; this wound would not necessarily have proved fatal ; I found that the wound on the left side was more serious ; and on opening the chest and abdomen, I found that the ball had passed through the chest and abdomen, from the left to the right side, wounding in its course the pleura, peritoneum, and spleen, liver, and stomach, I found the ball under the skin on the right side ; there had been a great deal of internal haemorrhage along the course of this ball ; I believe it was from the causes of this wound that death took place ; I was not able to discover the ball that had entered the shoulder blade but as it had not entered the chest I did not consider it necessary to make any further search for it. The round hallmarked “X” is the one which had entered the side, and was the cause of death ; the ball marked “T” I found in the substance of the tongue.

The jury returned the following verdict – “That on the 30th day of April last, at Pulpit Hill, the said Thomas Madden died from pistol shot wounds, fired by Sergeant Casey while in the execution of his duty, and not by any other violent means whatever to the knowledge of the said jurors, did die.” The jury also added that they consider no blame attached to Sergeant Casey.

I visited this grave today, Saturday 29 October 2016 and it is still in great shape.

http://livonne.com.au/2013/03/02/in-the-line-of-duty/comment-page-1/#comment-2072 In the line of duty Posted by Livonne in My world through the lens I went out to take some photographs the other day. I’m studying photography at TAFE and am doing a few assignments for which I needed photographs. One of the photos has to be a memorial or monument that in some way shows the history of the locality. I went to Hartley cemetery and found this particular gravestone. I found it fascinating so after photographing it, I looked it up to see if I could find anything out about it. The inscription on the gravestone reads… Read more »