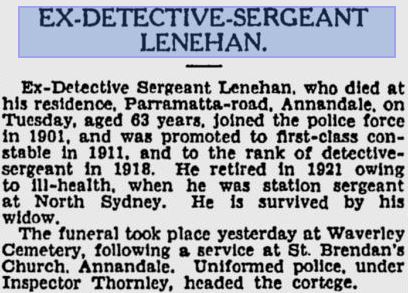 LENEHAN. — The Relatives and Friends of Mrs M. LENEHAN, of 73 Parramatta-road, Annandale, are Invited to attend the Funeral of her beloved HUSBAND, Victor Lenehan (ex-Detective Sergeant of Police), to leave St Brendan’s Church. Annandale, THIS WEDNESDAY, at 2 p.m., for Waverley Cemetery.

A search of Waverley Cemetery, on line, search did not locate the grave of Victor either under the name of Victor or Lenehan.  His grave may not have been digitised at this time ( 22 September 2016 )

A young man named Keith Fullagar was before Mr. Payten, at the Central Police Court, on Wednesday lasts to answer the serious charge of having, on the 5th of February, ravished and carnally known one Kathleen Trinder, without her consent. Sergeant Mankey conducted the prosecution, while Mr. Moss appeared tor Fullagar.

Dr. Cedric Bowker said that, at about 10 am on the 6th instant, he examined prosecutrix at the Health Department. He found a couple of bruises, but they were microscopical, arid he could not pass an opinion as to when they were caused. Dr. John Cleland. principal assistant at the Microbiology Bureau, said Constable Lenehan handed him a man’s shirt and a woman’s garment, both of which he examined. On the front of the man’s shirt he found a small stain, and on the woman’s garment stains. The stains on both garments might have been anything from a day to a week old, or more.

Constable Victor Lenehan said, in consequence of something Kathleen Trinder told him, he went to the Continental Cafe, Pitt street, between 1 and 2 a. m., on the 6th instant, and there Saw accused. After warning him that he and Senior Sergeant Drew were police, he asked Fullagar if he knew a girl named Kathleen Trinder, who used to work there, but he denied all knowledge of her. When asked if be took a girl for a drive

he said: ” No, I could not have done that. I was arrested and taken up to Darlinghurst and was there all the morning till dinner-time, so it could not have been me.” Accused was taken before prosecutrix, and witness read over her statement to him, and Kathleen said : ” Yes. every word of that is true, ” while accused only nodded his head. Accused was charged and made no reply. About 11 a.m. on the 6ih; he took Kathleen to the Board of Health, where she was examined by Dr. Cedric Bowker. She handed witness some clothing, which, she said, she was wearing at the time of the alleged offence. Lenehan obtained a shirt from accused, and handed it with the under clothing of Trinder to Dr. John Cleland, of the Department of Microbiology.

At this stage the court was cleared.

Kathleen Trinder, a waitress at the Continental Cafe, Pitt-street, until three months ago, said whilst she was employed there she met a man whom she knew as ‘Ginger,’ and had often seen him since. On the 5th of this month about 9 a.m., he was driving post 441 Elisabeth-street, where she ( Kathleen ) was staying, but, on seeing her at the door, pulled up, and asked her if she would go for a drive to Zetland. She agreed, but after going some distance noticed a sign board with Centennial Park on it, so asked him if this was Zetland.

and made no reply. She then said, ” Oh, my God, this is Centennial Park. ” He

said: ” You’re all right, kid.” He drove a little distance further, then pulled up the sulky, saying he was going to show her a snake he and Tommy Leary had killed the previous day, but, after looking, he said: ” Someone has pinched it. ” He put his hand on her knee, but she knocked it away. She kept resisting him, but finally he dragged her on to the seat of the sulky and accomplished his purpose. She screamed I out, and he said: ” Shut up, you little fool ; you’ll be on your head in a minute.” He asked her to get out on the grass, but she said: ” No, I will not ; there’s some people coming. ” He drove her back as far as the corner of Devonshire and Elizabeth streets, and when in Devonshire-street she asked him if there was

ANY MUD ON HER FACE,

and he said: ” No, kid, you’re all right. ” When he pulled up. he said: ” Good-bye, kid,” She replied, ” Good-bye, ” got out of the sulky, and walked away. It was then a little after 10 ; at 10.30 that night she sent for the police. She went through the form of marriage with a man, but he was already married, so it was null and void. When she returned home, she made a complaint to some of the women.

In answer to Mr. Moss, Kathleen said the sulky was in the bush, and there were not many people about. She did say ; “My God, this is Centennial Park.

” Mr. Moss : Why did you say that? Because once before ! was driven home by a man in a sulky.

Where did you meet him? — He used to come to the Continental Cafe’. What happened on that occasion — the same thing? No Nearly ? – Yes. Did he get you out of the sulky ?— Yes. How long is it since this happened ? — That was before Christmas. Did you know the man long ? — Not long. What time of night did you go out with the man ? — I could not say. Was it before midnight or after?— It was before 10.

Whereabouts in Centennial Park did you go ? – Along the main drive. But didn’t you pull off the main drive ? Yes. Into the bush? No Did you get out of the sulky yourself ? No ; he lifted me. Did you let him lift you ? Yes You did not object ? No What was this man’s name ? – Bert Morris. Did you walk with him after you got out? A little way. Oh, a little way ! Did he assault you? He dropped down and caught me by the arm, and

I FELL WITH HIM.

The park ranger came on the scene didn’t he ? Yes

Isn’t it a fact that he caught you misconducting yourself ? — No. Can you prove it ?

You answer my questions. You did not proceed against him ? — No.

Now, isn’t it a fact that, the park-ranger caught you in the act?— No, and I defy you to say anything to the contrary.

In answer to other questions, Kathleen said she had met Morris since, and spoken to him in a friendly manner.

Mr. Moss: Despite the fact that he attempted to assault you? — He did not attempt anything.

Well, what did he intend to do? (No answer.)

Come on : you have charged this man with a capital charge; do not mince your words. — Morris would have done the same if he could.

Well, then, he attempted to assault you? —Yes.

In answer to other questions, witness said this was not a snake yarn. Accused was intimate with her on the seat of the sulky. She did not know the length of the seat nor the width, but the back, she thought, was about 15 inches. She would not swear it was not six inches high. She went through the form marriage with a man whose name she would not give — but he

ALREADY HAD A WIFE.

She lived with in 1909 in .England. She sent a man named Owen Hegarty, whom she had known since August or September last, for the police, but she did not send him down to accused for the purpose of money from him to square it, nor did she send anyone else. She told Hegarty, Mrs. Male, and Mrs. Bale exactly what took place. She had been at a Mrs. Male’s place for the past three weeks, and had 3s or 4s when she .went there. She was not paying anything for her accommodation. She did not go out every night whilst staying there, and accost men in the street. She never told accused she had slept in a ” brown ” house in Abercrombie street with a man, and that there were bugs in the bed.

Who kept the house? — A Mrs. English. Were there any men in the house ? Two of Mrs. English’s sons and her husband.

Oh, we’ll leave the old man out: Were there any others? — No.

Were there any bugs in the bed? — Yes.

In answer to other question, Kathleen said she bad told Fullagar there were bugs in a bed in which she had slept, but she did not say she slept with a man, nor did she tell him the place was a brothel.

Ann Male, a married woman, living at 441 Elizabeth-street said prosecutrix had been staying with her for some time, and on the 5th went out.

Sergeant Mankey : Did she at some time before noon make a complaint to you?

Mr. Payten ; She could not make a complaint until she arrived home, unless she jumped from the sulky whilst in motion.

The question was allowed, and Mrs. Male said that, on returning home, Kathleen said she was taken down by a young fellow with whom she had been out.

Under cross-examination by Mr. Moss, witness said that it was about 12 when the complaint was made to her. Kathleen had been staying with her about three weeks, and had

GIVEN HER 5/ PER WEEK

the last payment being made on Tuesday week last.

At that stage the Court adjourned until 2 p.m.

On resuming, at the request of Mr. Moss, Kathleen; was back in the box, and, in answer to questions, said after the alleged offence she saw Morris and accused passing, and waved to them. She was discharged from the Continental, but it was not on account of carrying on with men there. She was not in Leary’s stables after Bert Morris tried to ravish her, but on one occasion she went to the stables to see some ponies. She told Mrs. Morris a man had been intimate with her in England when she was 11 years of age.

Mr. Moss: You heard Mrs. Male swear that you paid her 5s per week, and you swore that you were not paying her anything. Who is telling the truth, you or her ? – I do not know.

Were you telling us something that was wrong? — No.

Mr. Payten: One of you must be wrong. Did you pay per anything or not? — I have not paid her anything. Constable Walter Asquith said on the 15th of this month, he arrested accused, about 20 minutes to 12,

Fullagar, who said that he was not guilty and reserved his defence, was. committed to take his trial at the ‘Quarter Sessions on March 3, Bail was allowed, self and one surety in £150, or two in £75.