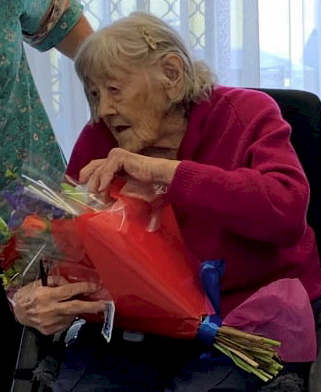 Time in Retirement from Police: 47 years

” Women In Blue ” to Lecture In Schools

Two young women who will soon be familiar figures to all school children in the district are Special Constables Vira Jenkins and Sue Elliott.

Special Constables Sue Elliott and Vira Jenkins make the acquaintance of some of the ‘props’ they will use daring their lectures to school children. The puppets include a policeman, a small girl and a villain. Posters, cut-out paper figures and miniature road signals are also part of their equipment.

They started work yesterday with the Newcastle school lecturing section of the police force and will assist Constables D. Pike and R. Mann in covering the 266 schools in the district.

While on duty the women wear the navy uniform and wide – brimmed hat designed for women police. They will travel to schools by bus or in the utility belonging to the section. Both are from Newcastle.

Miss Jenkins, who was a nurse before she joined the police force six years ago, will be living at home for the first time for years. She has been four years with the school lecturing section in Sydney.

Mrs. Elliott is a policeman’s widow. She joined up only two months ago and has been in Sydney to train for the work.

With her six-year-old son, she is now living at Lambton.

As well as lecturing at schools on road safety, snake bite, fire hazards ” and anything else affecting the safety of children, ” Miss Jenkins said, they will also do traffic duty at school crossings. ”

As soon as we have learnt our lines, we will ‘use puppets in our lectures, ” she said. ” We have to rig up a special stage and dress the puppets.

They have been used now in Sydney for some time and are immensely popular with the kiddies. ”

Miss Jenkins said there were now 36 women in the N.S.W. Police Force, 18 in uniform and 18 in plain clothes. This was the maximum number allowed and had been specified by an Act of Parliament.

ON MONDAY Constables D. Pike and R. Mann, of the Road Safety Control branch, gave a demonstration at Mayfield West School and Special Constables Vira Jenkins and Sue Elliott, who accompanied them, concentrated on the infants’ department where the children were taught road safety by means of nursery rhymes and poems.

The balance of the results of the 1935 final examinations of the Technical Education Branch were made available to-day.

Enrolments for the 1936 session will be accepted as from February 17.

Classes will reassemble on February 24.

QUALIFIED FOR PROMOTION TO HIGHER SCHOOLS

The result of the Primary Schools’ final examination issued to-day disclosed that the percentage of passes secured this year is very high.

DISAPPOINTMENT was expressed by some of the school teachers that children who passed very high in every subject but did not secure the necessary percentage of points in arithmetic failed to secure a pass.

The results of the bursary examination will not be made available for some time.