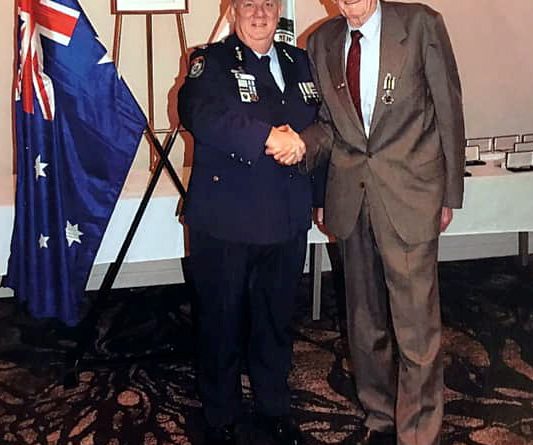 ( Due to current Govt. restrictions of 35 persons at a Funeral ( size of room ) due to the Cornona19 Virus Pandemic – this Funeral is already at capacity )

While this is a sad time for all, today we should take the opportunity to not only grieve for the loss of a friend, colleague, father and grandfather but to also celebrate the wonderful life of Warren John Reid.

Warren approached life and his career as a police officer with determination, confidence and enthusiasm. He was a policeman through and through, and like many police who take on that role he loved it.

Warren joined the New South Wales Police Force on 31 October 1966. After successfully completing his training at the Police College, he was sworn in as a Probationary Constable. This was an exciting time, being the same year when Robert Menzies retired as Australia’s longest-serving Prime Minister and is succeeded by Harold Holt. Decimalisation; the Australian currency is changed to dollars and cents, with the Australian dollar replacing the Australian pound., Warren was exposed to various facets of policing working at Newtown Police station learning his trade in general duties. A year later, he was confirmed as a Constable and remained at Newtown until 1969

On the 19th November 1969, Warren decided to try his hand in plain clothes and applied for training at No.21 Squad where he undertook Detective training. Shortly after this, Warren was transferred to No. 4 Division at Phillip Street, Sydney performing Criminal Investigation Duties. Warren was promoted to Constable First Class and performed plain clothes work, and no doubt with the older and more experienced Detectives of the time who decided to give him the jobs and reports no one else wanted to do. This was done to see how keen he was. He would have been preparing himself and studying the Crime Acts & proofs in preparation for the notorious Bull Ring. In February 1970, he was given a permanent job as an Investigator.

Between 1970 and 1977, Warren transferred between Phillip Street, North Sydney and Hornsby undertaking criminal investigation duties. In 1973 after undertaking so many years in training, he was officially given a Detective designation. During this period in 1976, Warren was again promoted to the rank of Senior Constable.

It was in 1978 where Warren changed his job roles and worked back in general duties at North Sydney for four years. In 1981, Warren become involved in Licensing Police duties at Central and two years later, continued in Detective’s duties in criminal investigations.

Warren being a consummate plain clothes investigator wanted to further his passion as an investigator. Later in 1985 he moved across to the Drug Law Enforcement Bureau and worked at Gosford Police District.

Between 1986 and 1997, Detective Sergeant Warren Reid worked at Eastwood, Chatswood, Pennant Hills and finally at Gladesville, he remained to his retirement in 1998, still performing investigative duties.

At the end of his career Detective Sergeant Warren John Reid had provided over 31 years of outstanding service to the NSW Police Force and the community of NSW.  His achievements are outstanding and are a tribute to his work ethic and professionalism.

On the 22 April 1983, Warren was awarded the National Service Medal recognising the special status sworn police officers have in protecting the community. Eligibility for this Award requires a minimum of 15 years ethical and diligent service.

To the Reid family members and friends on behalf of the New South Wales Police Force I extend our deepest sympathy for the passing of a remarkable and admired friend and colleague.

As the sun surely sets, dawn will see it arise.
For service above self-demands its own prize.
You have fought the good fight; life’s race has been run, and peace, your reward, for eternity begun.
And we that are left shall never forget.
Rest in peace, friend and colleague, for sun has now set.
We will remember, we will remember.
Hasten the dawn

Warren was a competitive Wood Chopper in his younger days.

I worked with ‘Wazza’ at Central Detectives. He was my senior workmate for 12 to 18 months. We had our ups and downs but remained friends. I’ve enjoyed a cold beer with Warren at the Berowra Heights Hotel before and after his retirement. A thorough and professional investigator that taught me heaps. Rest in Peace mate, your passing has saddened me.