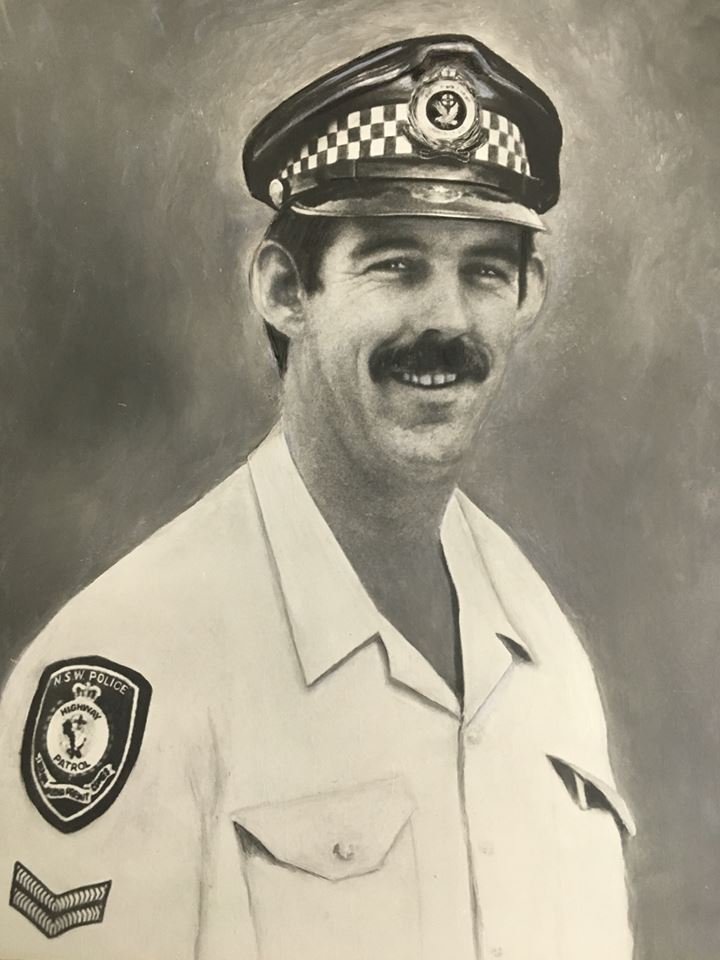 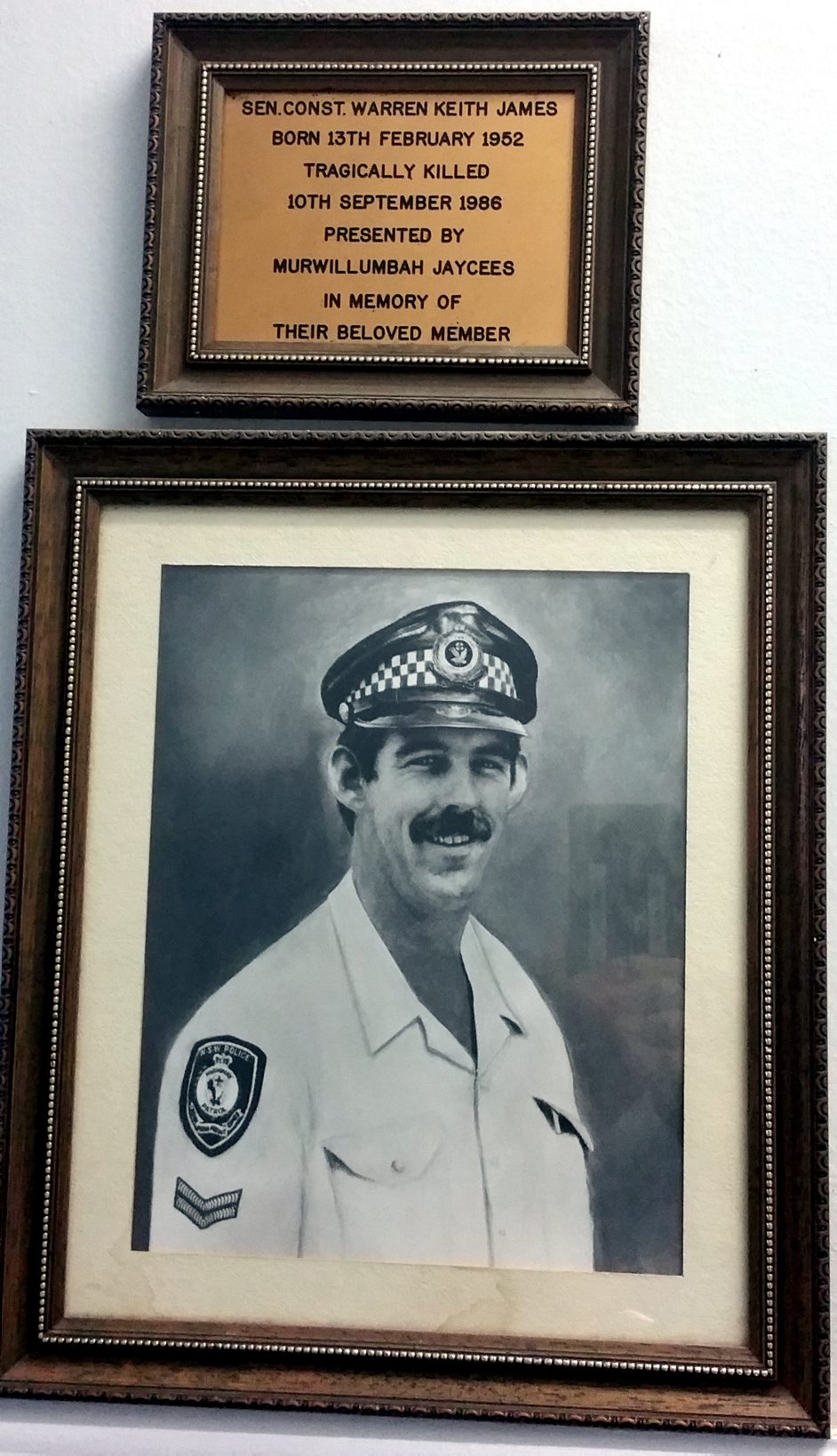 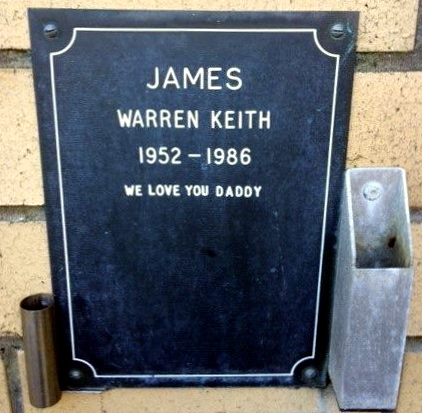 About 7.30pm on 10 September, 1986 Senior Constable James was a passenger in a police vehicle returning to Tweed Heads Police Station after attending Lismore Court, when the vehicle left the roadway and collided with a tree. The constable was killed instantly.

The constable was born in 1952 and joined the New South Wales Police Force on 26 February, 1974. At the time of his death he was stationed at Tweed Heads.

Thanks to Nick Gouliaev for another excellent installment in his series on our historic buildings. This is the final part (2) of the story of this Main Street icon.
The Police Station is in the Federation style, in complete architectural and visual harmony with the rest of the precinct; an architectural delight. The roof is high pitched with gable roof ends, framed and clad with corrugated metal roof sheets matching the other precinct buildings, although the roof cladding now needs replacement due to the metal sheets showing visible degradation with rust. Facing the main street is a main entry to the Detectives’ part of the building, with a roofed entry porch with double doors entry to the actual building, although today this is hardly ever used.
The porch roof is supported by timber posts decorated with Federation fretwork and brackets, as in the police station entry porch. All windows are original timber framed, clear glazed, of double – hung style and fitted with metal security grilles.
The brickwork is original, as used throughout all the precinct buildings. It is in first class condition and fitted with original terracotta air vents laid in stretcher bond with flush struck joints.
The main entry to the police station has been altered to be facing the main street instead of facing Police Lane. Today a concrete pedestrian access ramp with stainless steel handrails leads from the police entry porch to the entry gate at the Main Street boundary. The original main entry door has been replaced with a contemporary glass sliding door, electronically operated and CCTV monitored for a high level of security.
The internal walls are brickwork finished with smooth cement render, painted, and fitted with wide 150mm grooved Federation style skirtings at floor level. The air vents are original metal, adjustable and with a Federation floral decorative motif and are fitted to all external walls. The doors and windows are fitted with wide Federation grooved jambs and wide architraves. The doors are still in original Federation style; multi – paneled with glazed ventilation window above. The secure
areas have been upgraded with new generation doors and high security locks. The other areas however still retain their original brass locks and latches, retaining the charming originality and authenticity of the internal atmosphere of 1909. The corridors have decorated arched openings and terminating with beautiful arch brackets, in harmony with the wide plaster cornices throughout the building.
The ceilings are a combination of plaster lined ceilings and tongue and groove timber ceiling linings with recent alterations to some areas now lined with flat plaster boards. Wide plaster cornices with flower and leaf imprints decorate the edges of the ceilings throughout. The ceiling heights in the original areas of the building are 4800mm but in altered areas are lower, to 4500mm or less.
Various rooms have an original fireplace but the hearths of all the fireplaces are now closed off with a thin panel of white – painted Masonite. There are a total of four fireplaces in the building, but all would require careful refurbishment to re – awaken their 1909 architectural beauty, not only of the hearth and mantle shelves but also of the rooms.
The floors are of timber construction with timber floor boards, carpeted to some areas and covered with vinyl in others.
The Police lock up area consists of four cells, although only two are in use with the others used as storage rooms. The floors are concrete and all windows are fitted with heavy duty security grill/bars. Tweed Regional Museum Murwillumbah has an original steel cell door complete with “scratched surface graffiti” compliments of past prisoners in its collection. The cell door is solid sheet steel, approximately 25mm thick x 820mm wide x 2040mm high, hung on very heavy duty hinges,
with a rectangular inspection hatch. These days the delivery of individuals in police custody is at the rear of building to a secured area close to the lock up cells.
The Police Officers have use of a recreational area with a BBQ and seating under a timber pergola at the rear of the building. This area is called “The Mango Bar” and was opened Friday 15 Feb 1985 by Hon. W.[Bill] Bugden. The patron is His Honor Judge K.F.E. Torrington. One of the pergola posts has another plaque affixed to it with the wording “SWOS RAIL” in honour of Patrol Officer Warren James.
A third plaque is inside the Police Station, on the wall in one of the corridors, dedicated to “Senior Constable Warren Keith James”, born 13 Feb 1952, died 10 Sep 1980. The plaque was presented by Murwillumbah Jaycees.
Research and Acknowledgements
Murwillumbah Historical Society research team: Nick Gouliaev, Tony Clark , Max Boyd , Joan Cuthel , Judy Keane (TRM)
Police Officers; Dean Wilson and others
Tales of our Times, Ron Johansen
Red Sunday, Kath Pritchard, Murwillumbah Historical Society 2nd Edition 2015
Northern Star (1876 – 1954) 8 Jan 1908 Page 2
Municipal Murwillumbah 24 Oct 1907 (Reprint of municipal announcements)
Georgian Architecture in Australia; Uri Smith in association of the National Trust of Australia
The Federation House, Ian Evans, The Flannel Flower press.
Australia’s Yesterdays, Reader’s Digest Pty. Ltd.
Australia – The First Hundred Years, Being a Facsimile of Volumes 1 and 2 of The Picturesque Atlas of Australia, edited by Hon. Andrew Garran, M.A., L.L.D.,M.L.C.