Wayne IS mentioned on the Police Wall of Remembrance

About 5pm on 3 January, 1985 Constable Rixon and Probationary Constable Meredith Ireland were travelling in a Police Highway Patrol vehicle in Bannerman Crescent, Rosebery when they became involved in the high speed pursuit of a stolen vehicle. As the pursuit continued along Hayes Street the stolen vehicle sped through stop signs at the intersection of Dunning Avenue. The police vehicle slowed at the intersection but unfortunately collided with a truck that had been travelling along Dunning Avenue. After hitting the truck the police vehicle spun around and slammed into a brick wall. Constable Rixon sustained severe head and internal injuries and had to be released from the police vehicle by the Police Rescue Squad. He was conveyed to the Royal South Sydney Hospital where he was found to be dead on arrival. Constable Ireland was treated at the Prince of Wales Hospital for lacerations and shock before she was allowed to leave.

The constable was born in 1957 and joined the New South Wales Police Force on 23 January, 1978. At the time of his death he was attached to the Maroubra Highway Patrol. 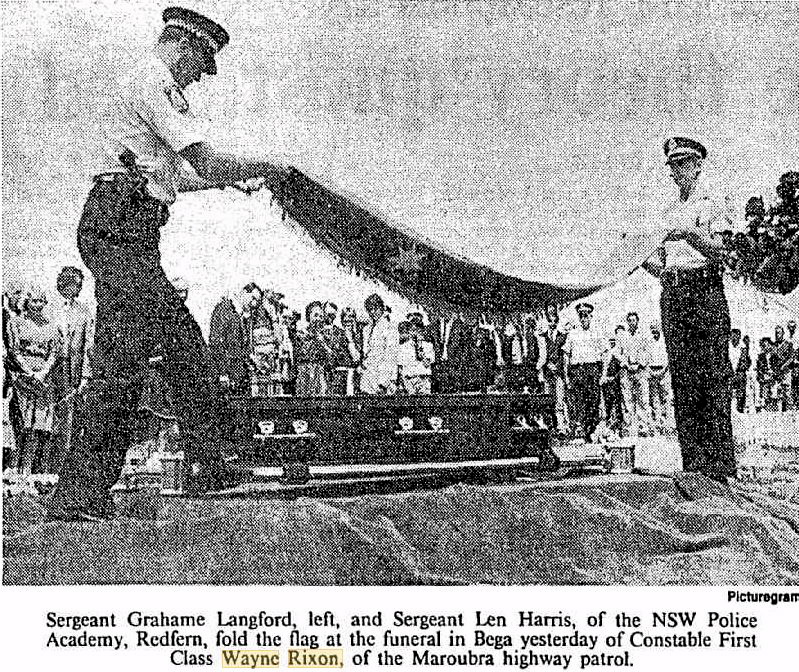 From BRONWYN YOUNG, in Bega

Hundreds of people packed the church and lined the streets of Bega yesterday for the police funeral of highway patrolman Constable First Class Wayne Rixon, 27, killed in a high-speed car chase in Sydney last Thursday.

About 100 police in uniform and plainclothes had been arriving in Bega for the funeral since Tuesday.

Constable First Class Rixon was working with Maroubra highway patrol when he died on Thursday, but he grew up in Bega. Many of the people in the church and watching from the street had gone to school with

him. Police closed two roads for the funeral procession and its police escort.

The coffin draped with the Australian flag was carried from the church by six police officers.

Some of them had worked with Constable First Class Rixon in Maroubra. A seventh police officer, Sergeant Grahame Langford, of the NSW Police Academy, Redfern, walked in front of the coffin carrying the constable’s cap on a blue cushion. The caps of the six pallbearers lay on the roof of the waiting hearse.

When the procession neared the Bega Courthouse the ranks broke and formed a guard-of honour. The hearse passed between the lines and gathered speed as it turned on to the road to the Bega Cemetery.

Country boys, although outnumbered, outshone their metropolitan rivals in the Tully Park event.

Wayne Carpenter, of Orange, won the junior country title with an aggregate of 148 and Wayne Rixon, of Bega, the country schoolboy title with 149. 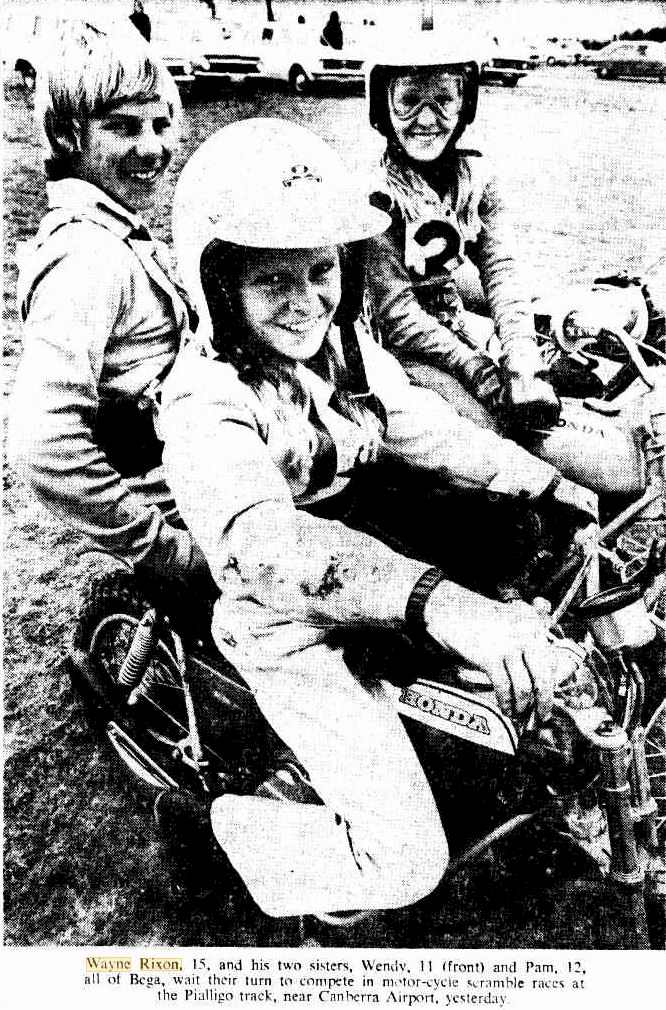 Both Wayne Rixon and Glenn Rampling formed part of a 3 man team at the Mounties, going around mainly to country fairs performing vault tricks with the draft horse. Tragically both lost their lives in High Speed pursuits after leaving the Mounties for other duties. RIP, both were good men.

[…] Wayne Rixon and Glenn Rampling formed part of a 3 man team at the Mounties, going around mainly to country […]