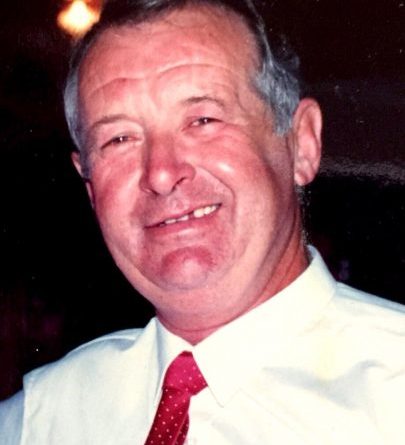 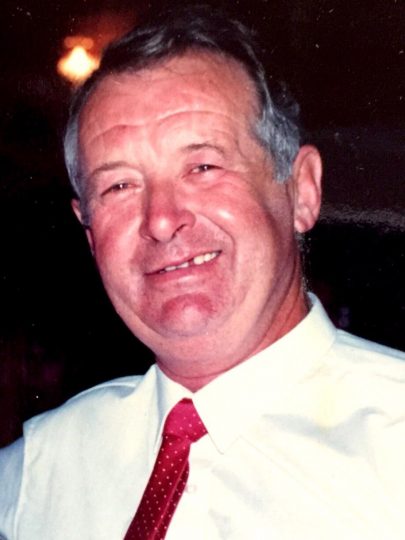 Cause:   Complications from Surgery

Beloved husband of Ronni. Loving father of Paul, Katherine and Peter. Friend to many, sadly missed.

William John (Bill) Scotcher – Keith Logue & Sons
Nothing further, at the time of publication, is known about this man or his career other than what is now shown.
When / if further information is obtained, it will be reflected upon this Memorial Page.

My first attempt to join the N.S.W. Police Cadets ended in bitter disappointment – deferred – under weight – back to the Rural Bank, Parramatta – “Eat plenty of bananas!”  My mate John Valdmanis and I used to go and look at the police exhibits at the Royal Easter Show.  There was the famous pyjama girl and the shark – tattooed arm murder cases, which absolutely fascinated us.  John passed the medical first try.  Oh, well, persevere!  So I waited a couple of more months and applied again – got through the G.M.O this time.  One of my ancestral great grandfathers, Edward Moloney, had been a member of the N.S.W. Police Force in the latter part of the 19th century.  First Class Sergeant Wal Glascock, then head of the Police Wireless Section, resided just up the road from us on the corner of Dorritt & Little Streets, Lane Cove.  Detective Sergeant Stanley Dugald Cameron lived just around the corner at 177 Longueville Road, Lane Cove and Inspector Ken O’Hara resided not very far away.  It was my ultimate objective in life to be a policeman and a detective.

On the 8 February 1956 I reported at the Police Training Centre, Redfern with a number of other fresh police cadet recruits where I was advised by Sgt. 3/c Jack Hyslop that a cadet aged 17 years or more had to be able to not only write and transcribe shorthand at the rate of 100 words per minute but to be also proficient at typing and pass rates of 45 words per minute prior to attaining 19 years of age as one of the mandatory requirements to qualify for acceptance as a probationary constable.

The officer in charge of cadets, Sgt. l/c McCorn, then accompanied three of the fresh recruits, including yours truly, to the Police Rules Section, which at that time was located on the northern side of the quadrangle near the Traffic Infringement Office.  Our duties there included updating Police Rules and Instructions which, incidentally, gave me a very good introduction to the various facets of law with which I was to be associated with in numerous capacities during my entire working life – Criminal, Mining, Environmental, Local Government, Valuation, Land, Commercial and Civil Acts in N.S.W., Queensland and Papua/New Guinea.  We had only been in this section for a matter of two weeks when one of my fellow recruits aged 15 committed suicide at Liverpool over a girl friend.

Shortly afterwards I was transferred to Regent Street No. 2 Division where I carried out telephone operations and intercepted wireless messages in a small alcove alongside of the charge room.  The time spent there was very enlightening, to say the least.  Les Walsh was one of the station sergeants and Jack Healey was in charge of No. 2 Detectives at that time.

During this transitional period between March/April 1956, Ian Beckett, Neil Taylor, Merv Lane, Brian Bourne and myself were learning elementary shorthand at the Metropolitan Business College, Macquarie Street, Parramatta, which was located about two blocks south of the Parramatta Police Station.  On one occasion a girl sitting behind me took an epileptic fit and I managed to place a ruler in her mouth to stop her biting her tongue.  The college later wrote to the Cadet Sergeants and I was permitted to read the complimentary letter.  I studied very hard concentrating on learning and utilising the various phonetic outlines and grammalogues, building up my shorthand writing speed by taking down and transcribing parliamentary sessions and songs during this period.  I was very concerned about the limited period that I had to pass the required shorthand and typing rates before I turned 19.  Constable 1/c Joe Smith was in charge of the elementary shorthand class at that time.  The cramming certainly helped me a lot because I breezed through the low speed class up to 80 words per minute in eleven working days and I was writing and transcribing shorthand at a 100 words per minute in four and a half months.  This then enabled me to apply for a country transfer.

During this period we were attending the Police Training Centre on a daily basis, carrying out physical training, learning law and debating as well as participating in sport.  While we were members of the N.S.W. Police Amateur Swimming and Life Saving Club, we swam mainly at the Sydney Domain Baths but on occasions held long distance swimming events at Brighton (outside of the baths).  During the earlier part of 1956, various ideas were put forward as suitable “shark repellants” and on one occasion, just prior to our swimming out to the two distant buoys and returning to the shore, dry ice was used as “an efficient shark repellant”.  All it appeared to do was send up enormous amounts of bubbles and whilst swimming back to the beach when some cadet yelled out “Shark!”  That sure encouraged everyone to treble the speed and be running by the time we reached the shore.  Johnny Raper (with Ray White and Andy Lynch hanging out of the box) rang the Daily Mirror from a public telephone down the road and reported the incident.  I do remember that dry ice was not used as a shark repellant on any future occasion we swam there.

After working at Regent Street for a period of about three months, I was transferred to Parramatta Police Station No. 18 Division where I carried out similar station duties – Jack Fisher was in charge of the Detectives at that time about May, 1956.

Two months later I was transferred to country duties at Maitland Police Station arriving there in early July 1956.  My duties there were carried out in the Public Safety Bureau office, typing up traffic breaches for PSB officers Dick Burgess and Ted Hamilton – Inspector Dave Sutherland was in charge at Maitland, assisted by Sgt 1/c Fraser with Ted Cahill, Prosecuting Sergeants Maurie Baker and Tom Sleeman were in the detective office at that time.

For the first four weeks that I carried out duties at Maitland, I did not receive my fortnightly salary, as there was a mail strike in Sydney.  Things were really tough as I was boarding in Church Street and was unable to pay my second fortnight’s board until my parents had wired some money up to me.  To the best of my knowledge the pay rate was seven pound twelve shillings and sixpence per week at that time because prior to my leaving home, my parents deducted five pound per week board and I had approximately two pound left, which just managed to see me through until the next fortnightly pay.

One day whilst performing duty at the old Maitland police station, which was directly behind and part of the court house, a list of stolen vehicles was broadcast over the radio from Newcastle police station and included: “Stolen – one sanitary motor truck”. The on duty police constable Tommy King called Newcastle by radio and said: “We’re all pretty browned off about that up here!”  On another occasion, I was requested to accompany Detective Tommy Sleeman to a tennis court at East Maitland where I was directed to walk into the shelter at the rear of the courts and in a discreet manner, ask a man who had been previously identified to me by Det. Sleeman, to accompany me back to the car where he was interviewed by the detective and arrested on warrant for committing Bigamy.

In August 1956 I attended a medical examination at Maitland Hospital for National Service, which was compulsory in that decade – Hunter River Lancers.  I was then transferred back to Police Training Centre, Redfern in September 1956 for initial induction of 28 Police Cadets into uniform and pedestrian crossing duties.

After the parade, I was transferred to the Public Safety Bureau, Parramatta No. 18 Division for duties on school pedestrian crossings and typing up breach reports etc.  After receiving suitable instructions in signalling etc. on pedestrian crossings, I was taken out to the then pedestrian crossing adjacent to the four way intersection on Victoria Road, Rydalmere (Family Hotel corner) in motor cycle and sidecar by O.I.C. Public Safety Bureau, (Parramatta) Sgt. 3rd Class Arthur Hancock.  Traffic was considerably heavy on this main road.  One afternoon shortly after commencing duties and whilst operating the intersection, I had occasion to signal traffic travelling in both easterly and westerly directions in Victoria Road to stop prior to allowing school children and pedestrian traffic from the nearby factories to cross at the pedestrian crossing.  The leading vehicle travelling in an easterly direction failed to stop when clearly signalled and continued east across the pedestrian crossing.  All other vehicles became stationary. I obtained the registration number and typed out a breach report when returning to the station.  The driver was subsequently summonsed and appeared at Parramatta Court where he pleaded “Not Guilty”.  Cadet Sergeant Brickell was present as an observer in the courtroom.  After I had given evidence under oath, the magistrate found the offence proved and a conviction was recorded.  I am not aware whether any other cadets in the first uniform intake had similar experiences or not but it was my first and one of many later court appearances.  If my memory serves me correctly, the offender’s name was William Henry Diggleman and he had prior convictions including for D.U.I.

At some time about November, 1956, Cadet Bill Scotcher and I were requested to attend Police Headquarters then located in Phillip Street where we were paraded before the then Commissioner of Police, Colin John Delaney and complimented on our outstanding shorthand ability.  Christmas 1956 saw uniformed cadets on duty at the pedestrian crossing at George and Park Streets, Sydney and I was temporarily stationed at Clarence Street, No. 1 Division.

Between February and June 1957, I served my compulsory National Service with No. 12 Battalion, Holsworthy, N.S.W. for the first six weeks of training.  Another police cadet, Nelson Chad, was also in “A” Squadron with me at that time, where we both attended O.T.C (Officer Training Course) and were promoted to the rank of corporal.  For the remaining initial three month period, I was transferred for specialist duties to the Armoured School, Puckapunyal, Victoria.

After this phase of national service, I was transferred to Burwood Detectives, No. 9 Division conducting school pedestrian crossing work there as well as clerical duties in the detective office until passing my final medical, being sworn in as a probationary constable after completing the inductional class at the Redfern Police Training Centre during August/September 1957.

HIS Excellency the Governor, with the advice of the Executive Council, has approved of the following appointments:

The undermentioned Members of the Police Force to be Inspectors under the Liquor Act, 1912, as amended by subsequent Acts, for the Licensing District preceding their names, from the dates specified, viz.: