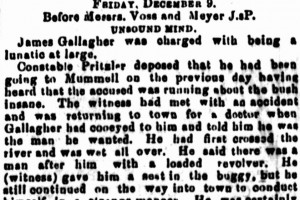 Before Messrs. Voss and Meyer J.sP.

James Gallagher was charged with being a lunatic at large.

Constable Pritzler deposed that he had been going to Mummel on the previous day having heard that the accused was running about the bush insane. The witness had met with an accident and was returning to town for a doctor when Gallagher had cooeyed to him and told him he was

the man he wanted. He had first crossed the river and was wet all over. He said there was a

man after him with a loaded revolver. He ( witness ) gave him a seat in the gubby, but he still continued on the way into town to conduct himself in a strange manner. He was certainly not under the influence of liquor.

Remanded for 7 days for medical treatment.