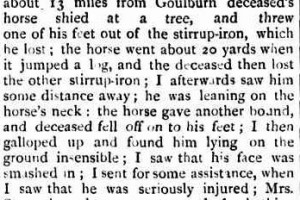 FATAL ACCIDENT. A MOUNTED-CONSTABLE named William Morman St. John Maule met with a fatal accident on Thursday last while in company with mounted-constable Pritzler in search of a lunatic. It appears that when about 13 miles from town, on the Mummel road, Maule’s horse bolted and threw the rider, and in rushing past him knocked deceased with great violence against a tree, rendering hm unconscious. Pritzler at once procured a buggy, in which he conveyed the poor fellow to the hospital, when Drs Davidson and Gentle immediately attended him and found him still in an unconscious state, and suffering from a severe scalp wound, broken jaw, and injured nose, besides several injuries to his body. The sufferer remained unconscious for five hours, when he expired. An inquest held yesterday afternoon at the Hospital before the coroner(A. M. Betts Esq). when the following evidence was taken :- Simon Pritzler deposed: I am a mounted policeman stationed at Goulburn; the body just viewed by the coroner is that of mounted constable William Norman St. John Maule ; he had been at Goulburn about 6 weeks, and had only been in the force since June last ; he was 28 years of age and unmarried ; yesterday afternoon he came to me, and we both went to Mummell, about 14 miles from Goulburn, when we got about 13 miles from Goulburn deceased’s horse shied at a tree, and threw one of his feet out of the stirrup-iron, which he lost; the horse went about 2o yards when it jumped a log, and the deceased then lost the other stirrup-iron ; I afterwards saw him some distance away; he was leaning on the horse’s neck : the horse gave another bound,