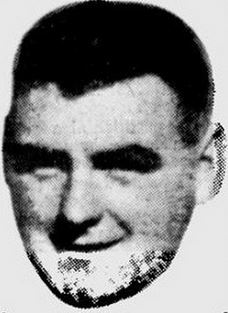 BERNARD IS mentioned on the Police Wall of Remembrance

On 26 February, 1955 Constable Orrock of the Sydney Water Police was performing flood rescue duties in the Maitland area during the horrendous 1955 floods. While travelling with Army and Air Force personnel in an Army Duck toward the Louth Park area, the wireless aerial on the Duck struck live high tension power lines. As a result, Constable Orrock and two Army Signallers, Sergeant William McGrath and Signaller Eric Chard, were killed. The cause of death was asphyxiation caused by electrocution.

He was posthumously awarded the Queen’s Police Medal for Gallantry and a Bronze Medal from the Royal Shipwreck and Humane Society for his actions in the floods that ultimately led to his death.

The constable was born in 1930 and joined the New South Wales Police Force on 22 January, 1951. At the time of his death he was attached to the Sydney Water Police.

AWARDS FOR GALLANTRY IN N.S.W. FLOODS

The Queen has conferred awards for services during the floods of last February and March.

The awards were announced by the Governor, Sir John Northcott, and the Prime Minister, Mr.Menzies, yesterday.

The Queen’s Police Medal for gallantry was awarded posthumously to Constable Bernard Alfred Orrock, of the Sydney Water Police who was killed during rescue operations.

The Queen’s Commendation for Brave Conduct was awarded to four policemen and four civilians.

Inspector Peter McLachlan, of Newcastle, who was awarded the British Empire Medal, personally took part in more than 100 rescues in the Singleton district.

He was without sleep for four days and nights directing dozens of other rescue operations, including the organisation of an aerial flood lift into Singleton, and emergency accommodation for hundreds of homeless people.

Constable Bernard Alfred Orrock, 24, of Alpha Rd, Willoughby, who was awarded the Queen’s Police Medal for Gallantry ( posthumous award ) was attached to the Water Police when he was electrocuted on an Army duck at Maitland on February 26.

The duck on which Orrock was travelling hit a 66,000 volt high tension wire near the Maitland railway bridge while trying to reach 100 people who were stranded there.

Before he was killed he assisted in the rescue and evacuation of about 70 people.

Washed Over Dam In Boats

There were in two police flood boats, which were washed over a dam, near Singleton, while trying to get Inspector McLachlan into Singleton at night.

Constables Bourke and Ivarsson later in Singleton, took part in scored of rescues under Inspector McLachlan.

Constable Munns worked with Constable Orrock at Maitland and took part in more than 100 rescues.

Wash from a ship’s propeller swept a man to death beneath a wharf at Walsh Bay yesterday.

A wharf foreman, who plunged fully clothed into the water to rescue him, received cuts and bruises when he was buffeted against the wharf.

Mitchell, a welder, was working on the stern of the motor vessel Braeside, moored at No. 7 wharf.

He was standing on scaffolding on a raft floating between the ship’s stern and the wharf, when wash from another ship, Muliama, rocked the raft, overturned the scaffolding, and sent him tumbling into the water.

A wharf foreman, James Curry, of Cascade Street, Paddington, dived into the water and supported Mitchell until Maritime Services Board employees Stewart Dutton, of Herne Bay, and Leslie Lindwall, of Seaview Street, Dulwich Hill, reached them in a launch.

Mitchell was given artificial respiration before the arrival of the police launch Typhon, with Constables B. Orrock and W. Atkins aboard.

Central District Ambulance took Mitchell to Sydney Hospital, but he was dead on arrival.

Water Police yesterday rescued a man clinging to a pylon in three feet of water under a wharf at Walsh Bay.

The man, William McCormack, 60, of Victoria, told police he did not know how he got into the water, but must have been there for hours.

He was blue with cold, and on the point of collapse when rescued by Constable B. Orrock, assisted by Sergeant D. Lechleitner and Constable J. Nicholson.

McCormack was admitted to Sydney Hospital suffering from immersion.

[…] Queen’s Police Medal for gallantry was awarded posthumously to Constable Bernard Alfred Orrock, of the Sydney Water Police who was killed during rescue […]