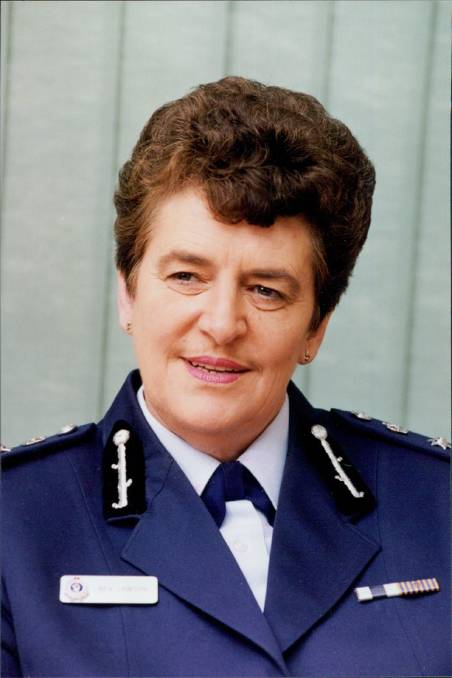 Buried at:  Kanahooka Lawn Cemetery, Eastern side before office, several rows from roadway

Bev Lawson suffered from a stroke in her Tarrawanna (Wollongong) home on 21 January 1998 as she prepared to attend the funeral of a retired Police woman, Ruth Styles, at a country centre.

Ruth Styles was an Inspector having previously been stationed at Warilla NSW.

Bev Lawson was transported to Wollongong Hospital and died at 10.20am on the 22 January, 1998 in Intensive Care.

Bev was aged 58 at the time of her death.

Because Bev, and other females of her time, were only ” Sworn In ” as ” Special Constable ” – I am not sure where Bev exactly sat in relation to ” Seniority ” within her Academy Class.  Her other classmates ( Males ) who were ” Sworn In ” as Probationary Constables, had the Registered numbers 10985 to 11085 ( roughly ).

Under the current Registered number system, Bev would have slotted into a number somewhere within that range. 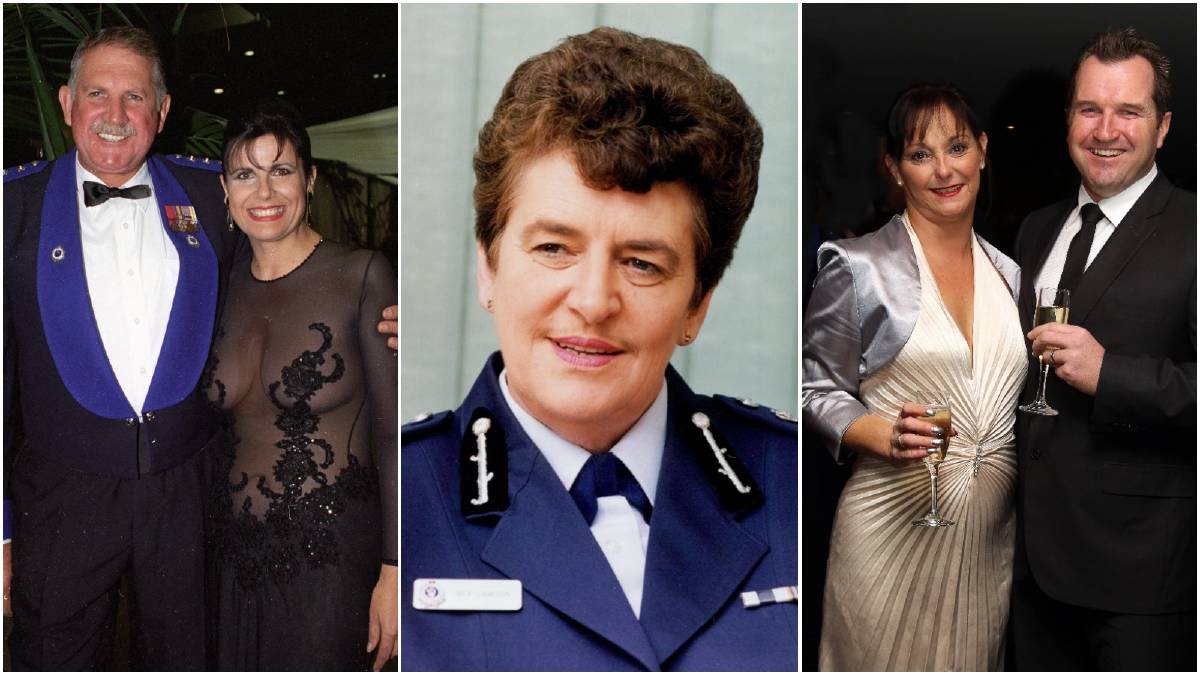 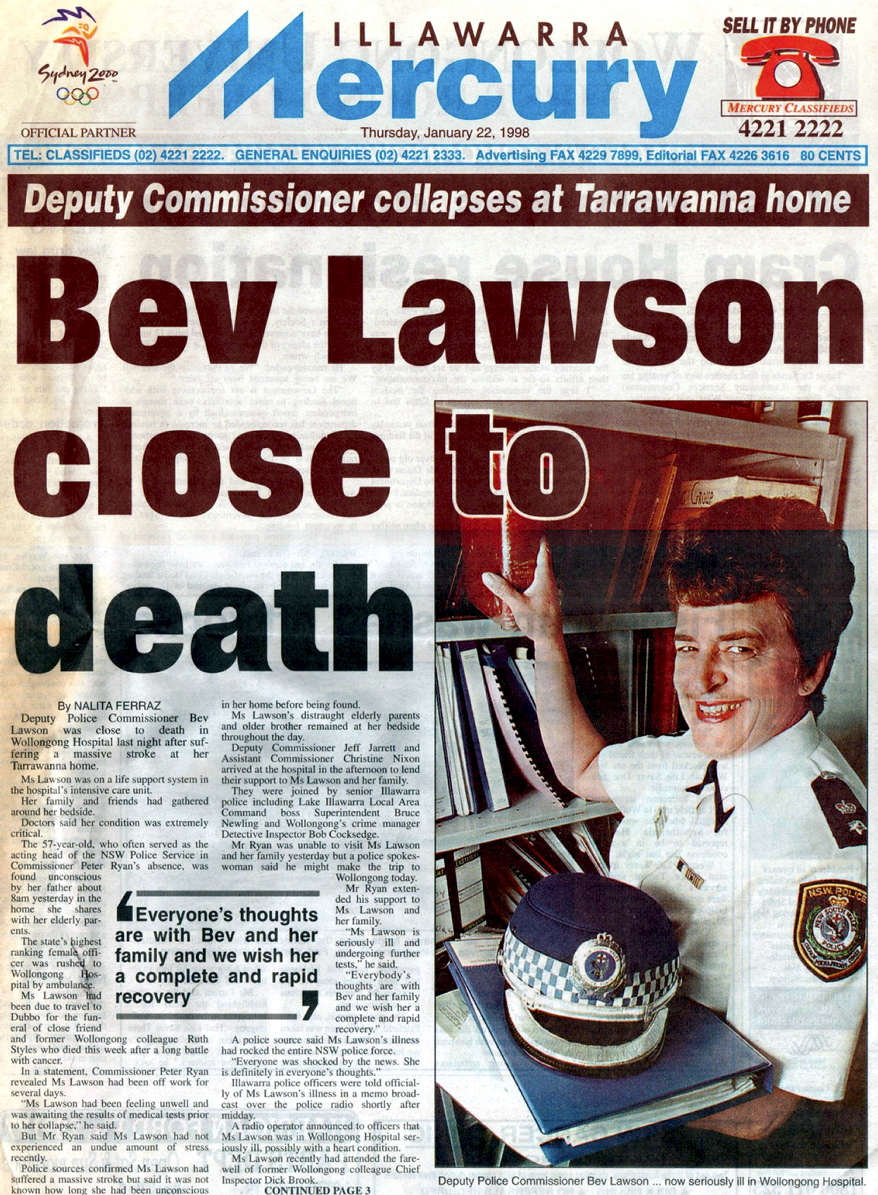 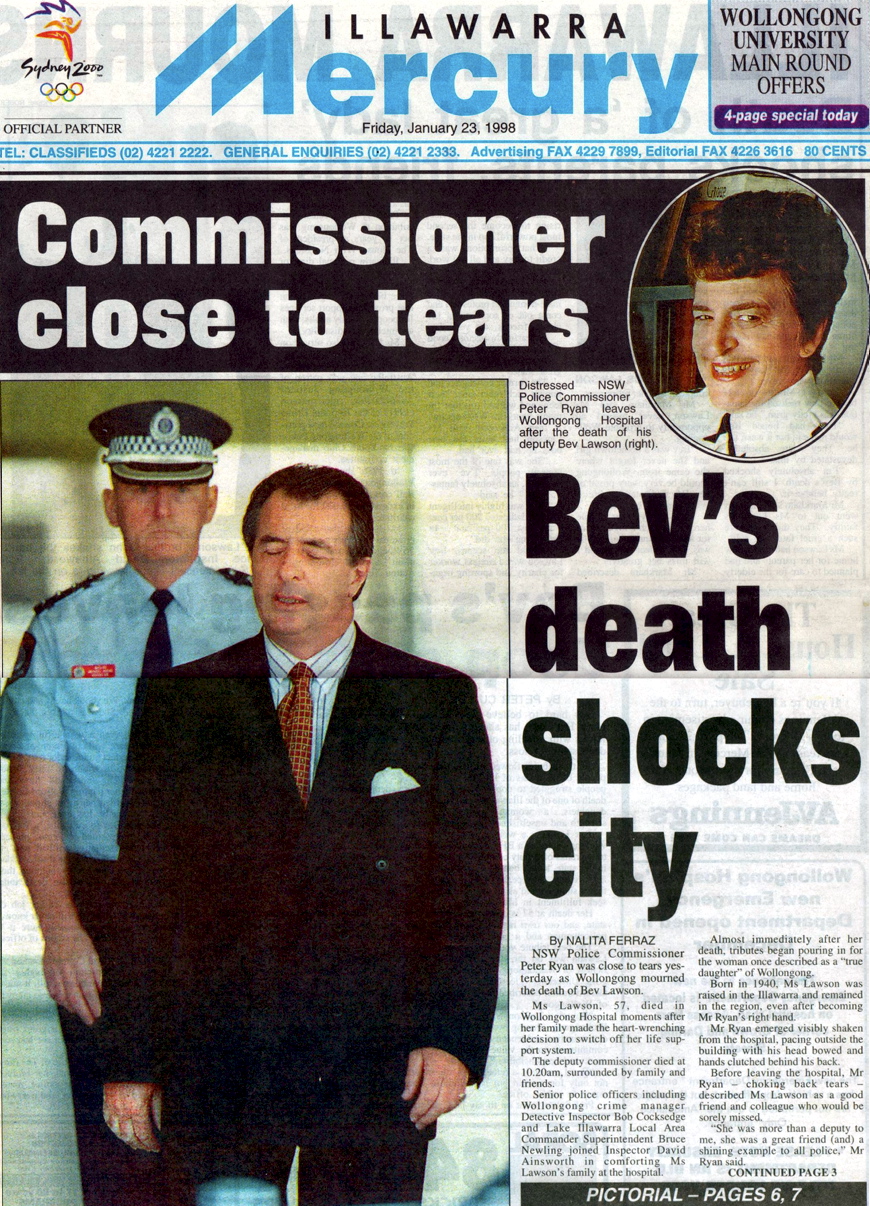 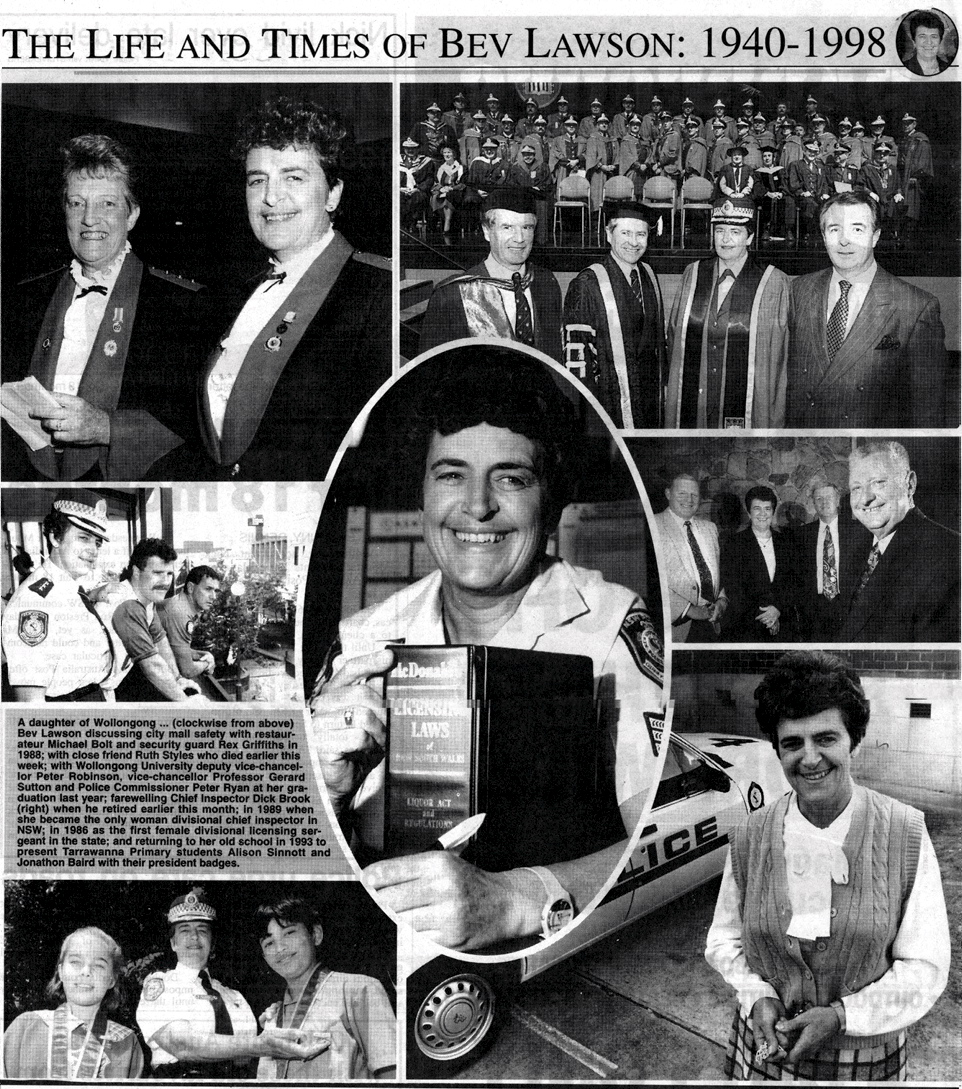 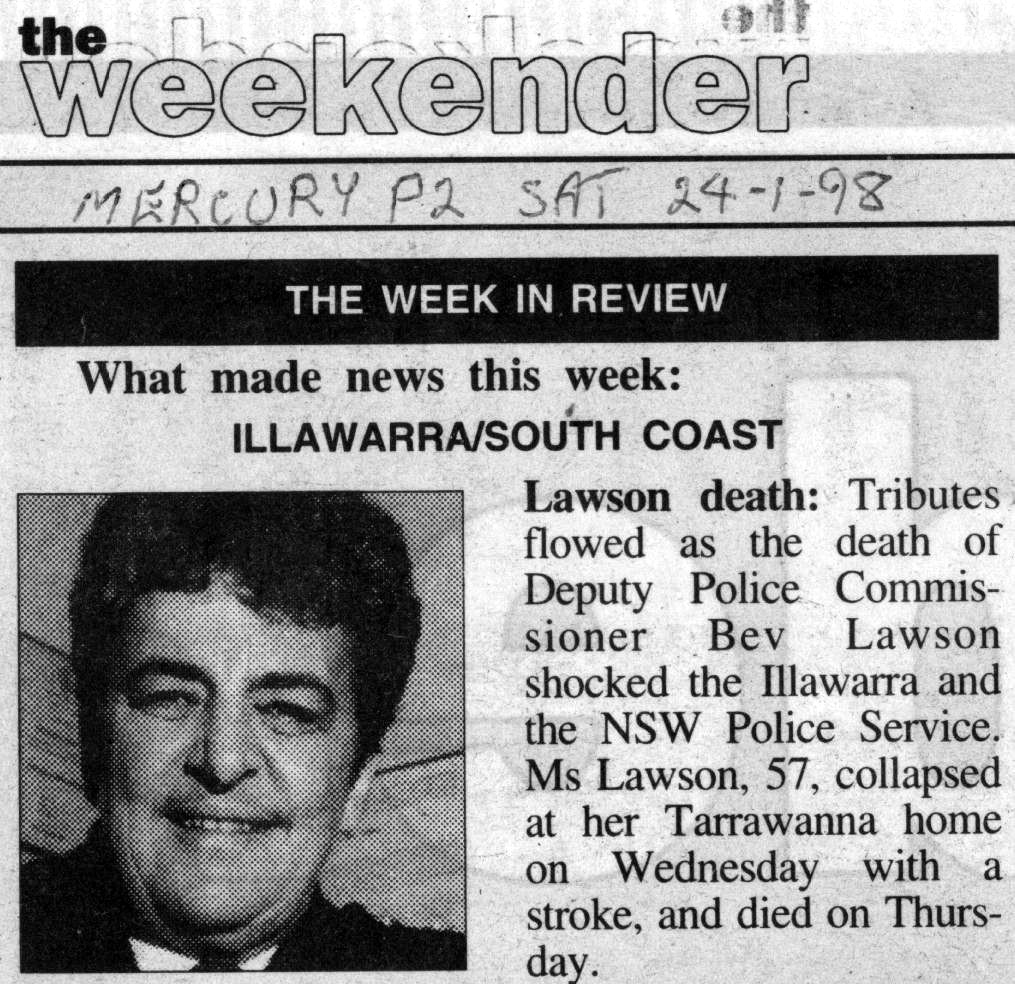 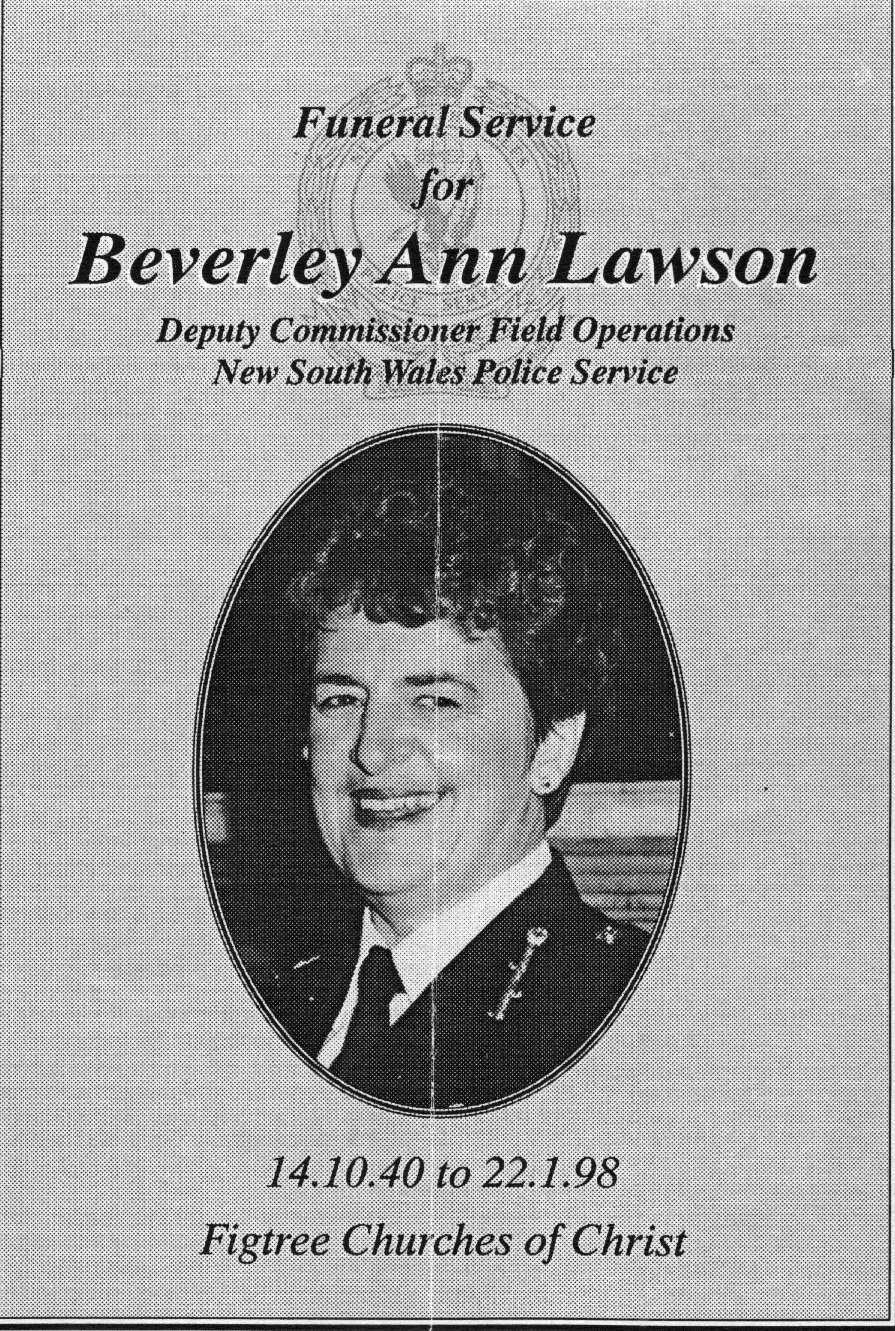 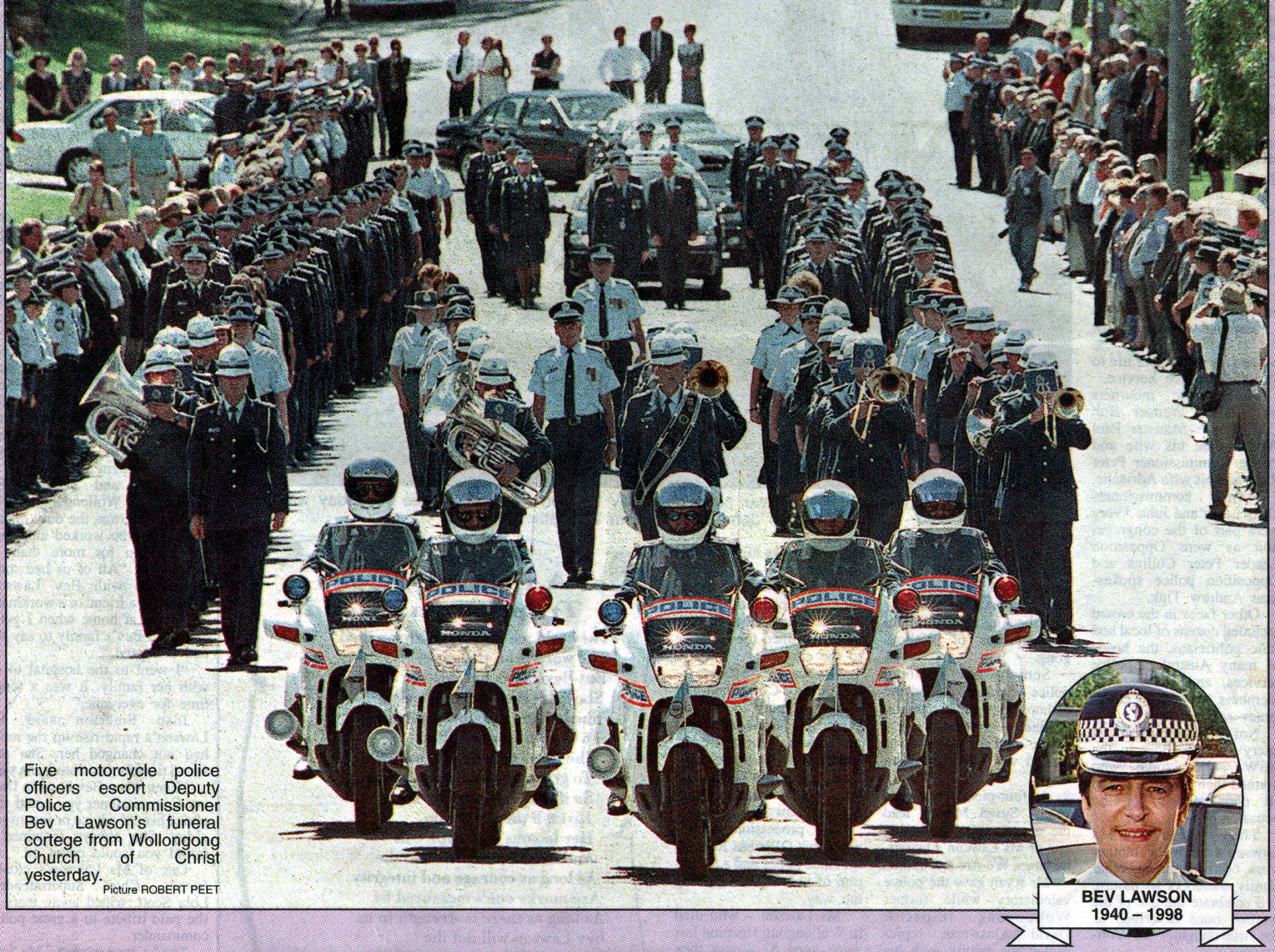 It all started when a cop stopped to ponder the difficulties facing cancer patients forced to travel to Sydney for treatment, writes Cydonee Mardon.

Wollongong was home to one of the most influential police women of our time.

Not only did she pave the way for women in policing, but she gave birth to a tradition that has raised thousands of dollars and helped thousands of people across the Illawarra.

In 1985, Sergeant Lawson, of the Wollongong patrol, wanted to find a way to bring police and the community together in a social setting.

But her main purpose was to help people in need.

A survivor of breast cancer, then Sgt Lawson was all too familiar with the struggles that people in the region had accessing treatment in Sydney.

The emotional and physical burden of distance was something that concerned her.

So she set about organising a charity ball to raise funds that could help patients get to Sydney.

The first charity ball became a reality on Friday, August 1, 1986 at The Fraternity Club in Fairy Meadow.

Raffle prizes included a $1000 travel voucher from Ansett, a microwave oven and $200 worth of house paint.

We are really proud of the amount of money we have raised as a community and the help we’ve been given to so many important services in the Illawarra.

Both causes were close to Bev’s heart. She had been in remission for nearly five years.

”When we were considering these options, I thought about people having to travel to Sydney daily for their treatment,” she said at the time.

“I really don’t know how some of them get up there, or more specifically how they cope.”

​The ball then became a vehicle to reach out to the community – a way of encouraging charities to speak up and a way for the police to show they were about more than locking up crooks.

At the time of her death from a stroke in January 1998, Ms Lawson was Australia’s highest-ranking female police officer and even as she rose through the ranks, she and her family remained strong supporters of the ball.

“Her vision of a community working together to benefit those in need still remains strong and has been adopted by the current committee,” said Inspector John Klepczarek.

“It’s always been the criteria that the ball has to has to help the local community.

“We tend to shy away from the big charities that get lots of donations and we pick those that struggle or are less heard of,” he said.

“One year we raised money for an entire kitchen to feed the homeless … another time it was ipads for pallative care patients at Port Kembla hospital.”

“We had a year where a couple went through bad trots with young babies so we put money towards Wollongong Hospital’s children’s ward.”

One of the committee’s proudest associations is with the University of Wollongong’s graduate school of medicine and clinical skills. Each year the top-placed student who dedicates their services to regional nursing receives the Illawarra Police Charity Ball medal.

Inspector Klepczarek, who was committee president for 15 years and current vice-president, said the most well-attended ball to date was the year police officers farewelled then Assistant Commissioner Christine Nixon.

Some 450 people attended the ball to pay tribute to the Wollongong commander who went on to become Victoria’s police commissioner.

She’s one of many of the top brass who graced the dance floor over the years.

NSW Police Commissioner Mick Fuller will attend this year’s ball on July 27 at the Wollongong University Hall. The venue is testimony to the growth and popularity of the event since those early days at the Frat.

The ball committee meets in January every year to decide which charity will next benefit.

“It’s not a police event, it’s a community event. We get more people attending who aren’t police officers. We are extremely proud we’ve been able to carry on the work of Bev Lawson and keep her vision alive.”

I worked at the Manly Police College for years and met a lot of the Leadership of the NSW Police – aka “NSW’s Finest”. Bev Lawson did some great works in the NSW Cops – but there also was a dark and also incompetent side to her. Have a read of her sworn evidence given to the NSW Police Royal Commission – which tellingly exposed her operational incompetence during Operation Paradox in 1992. Please see the front page Illawarra Mercury article hyperlink: https://www.bmartin.cc/pubs/19gong/19960423mercury.pdf “HOW THE POLICE BLEW IT” Note her Public Admissions concerning her Police leadership failures at Wollongong. Miss… Read more »

It was my honour (and a genuine pleasure) to have been Beverley Ann Lawson’s driver. I cannot believe that it has been Twenty years since her passing. I and your many friends, still miss you Ma’am.