Formal portrait of RAN and RAAF officers at the RAN/​RAAF Australian Joint Anti-Submarine School (AJASS) at HMAS Albatross at Nowra NSW. The only identified officer is O210106 Flight Lieutenant David Valentine Paul DFC RAAF at front row far left. Flt Lt Paul enlisted on 4 January 1941 and trained as a pilot with the Empire Air Training Scheme (EATS) in Rhodesia. He was posted to 454 Squadron RAAF. Flying a Baltimore aircraft from a base in North Africa he was shot down on 4 December 1943 during a sortie over the Mediterranean. Rescued from the sea he became a prisoner of war (POW) of the Germans, finally being released in 1945 at Stalag IVb POW camp in 1945 at Muhlberg, Germany. He joined the NSW Police Force after the war and remained in the RAAF Reserve rising to the rank of Squadron Leader.

Buried at:   ? – usual searches fail to locate a grave or mention of death 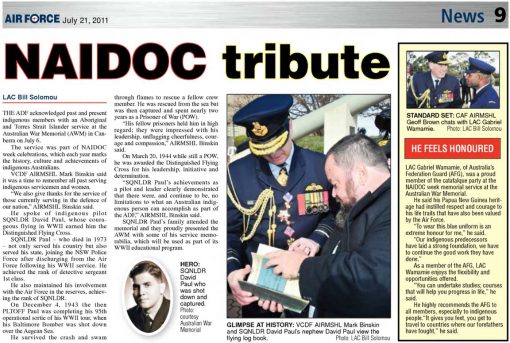 David was an RAAF Pilot during WWI and, afterwards, joined the NSW Police.
He was also a member of 22 Squadron, Richmond, NSW and apparently died of a heart attack at the Squadron at Richmond in 1973.
The Sun   Friday  2 Sep 1949  page 1

The following non-commissioned officers (Pilots) are appointed to commissions on probation with the rank of ( Sergeants ) with effect from the dates indicated: –

The Air Minister, Mr. Drakeford, has announced that six officers of the RAAF serving overseas have been awarded the DFC.

THE GOVERNOR-GENERAL HAS RECEIVED ADVICE THAT HIS MAJESTY THE KING HAS APPROVED OF THE FOLLOWING AWARDS- 28th March, 1944:—

For skill, courage and devotion to duty in flying operations against the enemy:

Did you see see pleasant looking copper at Pitt and Market Streets yesterday sporting the D.F.C.?

He was Constable David Paul ;

flew Baltimores in 454 Squadron ; was taken prisoner east of Athens, and spent 17 months in the bag.

* the only link is the name.  Not confirmed as the same person.

THE DOOR WAS MADE READY FOR A RAID HUSBAND,

suspicious of his wife, loosened screws in a bolt on the front door of his flat to gain easy entry for a raid he planned to catch her with the co-respondent.

The husband, pastry cook Reginald John Ginns, of Kirribilli, was 21 when he married Doreen Frances Ginns, formerly Angove, in February, 1940, she being 22.

Ginns said he became suspicious of his wife and engaged an inquiry agent.

On December 7, the raiders forced the door. Ginns said he switched on the light and found his wife and a man on the floor of the lounge room.

A lumber jacket belonging to the man yielded the name of David Valentine Paul, of Crow’s Nest, he added.

Ginns was given a decree nisi on the ground of his wife’s adultery with Paul; he also obtained custody of the only child of the marriage, a boy of six.

The Tenterfield Coroner found today that Richard Colin Perram and Eileen Emily Wratten had died from burns accidentally suffered when the aeroplane in which they were flying, crashed last Sunday.

Frank Lawrence Cornford said that he was at Tenterfield aerodrome and heard Mrs. Wratten say to Perram prior to taking off ” I want you to do some loops and turns.”

When the plane took the air the pilot started to loop the loop and do steep turns and rolls. The plane then started to Shoot up the ‘drome, he said. ”

The plane was flying excessively low and when about 150 feet up the plane made a stall turn. It then went into a spin and crashed to the ground.

Within a matter of seconds it burst into flames.”

Cornford said that with others he rushed to the plane, but by the time he got there it was impossible because of the heat and flames to get near enough to be of any assistance.

Constable David Paul, of Clarence Street Police Station, Sydney, said he saw the plane in the air over the aerodrome. It was stunting at a height of about 500 feet and stall turning. In a final dive the plane passed over the head of a person on the aerodrome at about 25 feet, pulled up to a height of about 150 feet and attempted another stall turn. At the top of the turn the aircraft stalled completely and crashed.