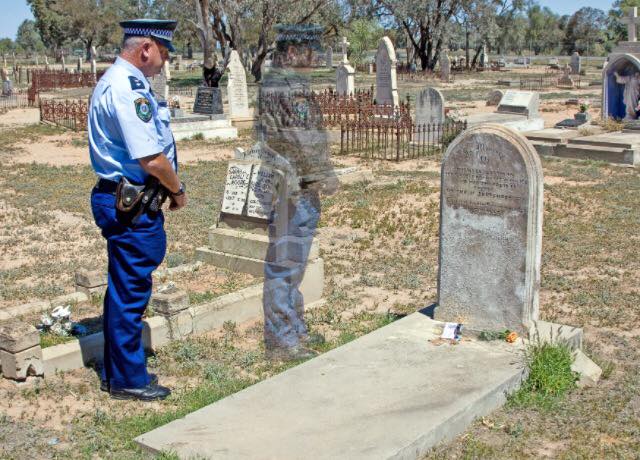 On Tuesday 11 September, 1877 Samuel Getting, a barman at the Royal Hotel in Bourke, was speaking with Constable Michael Costigan in the bar of the hotel. The constable had just paid Getting for his room and board, and after having a drink and chatting with the barman for a short time, he left the bar.

Getting, for some unknown reason, also left the bar about that time and went to his room in the hotel, where he took possession of his rifle. He then left his room and walked to the front of the hotel, where he saw Constable Costigan and Constable George Armytage standing on the verandah, having a conversation. He immediately shot both constables from behind before running into the street and attempting to reload his rifle.

Sub Inspector James Keegan, who was nearby, noticed people running toward the river, and when he asked what was happening he was told that Sam, the barman, had shot two of the police and was running away with a loaded gun in his possession.

He then saw Getting running along the bank of the river with a gun in his hand, being chased by several people. The inspector then went towards these people and told them to move away from Getting so he could speak with him. He then followed Getting for a short distance along the river until he stopped and waited for the inspector to approach. The inspector then spent some time talking with the offender and trying to get him to surrender, all the while edging closer as he spoke.

At a later inquest, the inspector described what happened next.

“I rushed at him, being at this time between 10 and 15 paces from him. The ground was very muddy, and there was a gully between us. I got my hands upon him being beneath the gun, and we both stumbled and nearly fell. He again got a few paces from me, turned round, took deliberate aim, and shot at me. He called to me to keep back. I knew I was shot, but it did not weaken me, and I still went forward.

He then raised the gun, holding it by the barrel, and struck me on the head. I put up my arm to ward off the blow, and it bruised my arm very much and cut my head. He struck me several times, and I at length secured the gun. He then ran parallel with the river for a few yards, and as I followed him he suddenly plunged into the river, and kept his head beneath the water until he was drowned. He went but a short distance into the river.

That is his body I have recently seen lying in an outhouse. He had plenty of opportunity of shooting me at first had he so desired, but he did not attempt to do so until I sought to arrest him. When he shot at me, one shot struck me near the eye, two shots went into my coat, two entered my chest, and two others grazed it.

The Deceased…was a man of very good character and very good behaviour, and I can ascribe no motive for his acts. He said he had no intention of doing what he did, and that he had loaded the gun to go out for some duck shooting.”

Constable Costigan was born in 1853 and joined the New South Wales Police Force on 11 September, 1873. At the time of his death he was stationed at Bourke.

Constable Armytage was born in 1855 and joined the New South Wales Police Force on 4 May, 1877. At the time of his death he was stationed at Bourke.