Buried at: Walgett in the R.C. section of Walgett Cemetery. plot 117K

………Another police officer also was mourned today – Senior Constable Ian Ross Dennis, based in Walgett, north-west NSW, who died in hospital after a short battle with an illness, aged 47.

Mr Moroney paid tribute to both officers, saying they had been outstanding servants of the police force.

“It’s important on these occasions that we honour and acknowledge that service and that commitment,” he said.

“It’s a very sad day for the organisation to lose officers of this calibre who have selflessly served the people of this state to the very best of their skill and ability.

“And that’s all I could ever ask them to do.”

Ian Borland Ian started out as a probationary constable at Bathurst where he worked for several years before he transferred. Prior to entering the Police he worked for the now defunct Evans Shire Council as s Grader driver. He was brought to Bathurst from Walgett to play rugby league for Bathurst St Patrick’s Club.He was also an accomplished boxer. He fought for the Australian attire at Exhibition Hall, Brisbane where he was beaten on points and collapsed after the bout.It was discovered he had glandular fever and blood poisoning yet he fought the full twelve rounds. After the bout he was not offered a rematch.He and his wife Anne were tireless workers within the aboriginal community here in Bathurst.

late of Walgett, formerly of Bathurst

Buried at Walgett in R.C. section.

Ian is NOT mentioned on the Police Wall of Remembrance

Ian is NOT mentioned on the Retired Police Association Vale list

Castlereagh LAC Police and the Walgett Community took to the field on 26 October 2014 to commemorate the 10th Annual ‘E A’ Dennis Memorial cricket match.

The celebrated event was initiated in 2004 to honour the memory of the late Senior Constable Ian Dennis, an Aboriginal police officer formerly based at Walgett and Lightning Ridge.
As the temperature soared to 39.2 degrees, players from both sides demonstrated enthusiastic cricketing skills and a strong sense of community spirit. “The match is all about building better relationships between our police and our community. We all want the best for our community, and if we work together we have a better chance of reducing crime and re-offending”, said annual match organiser and Castlereagh LAC Aboriginal Community Liaison Officer (ACLO) Graham Ruttley.In a close-fought battle reminiscent of Ashes tests from yesteryear, the 20/20 match resulted in a hotly contested draw.
The much-admired Senior Constable Dennis died in 2004. He is survived by his wife Ann Dennis, and their three children. Ann Dennis said Ian would be proud of the comradeship and encouragement displayed on the pitch.

“I can’t believe it is ten (10) years since Ian had died. Ian had overcome many obstacles and challenging adversity to fulfil his dream of becoming a Police Officer with the NSW Police Force. This cricket match provides the only opportunity in our community for Aboriginal people to engage in a different more positive way with local police officers,” said Ann Dennis.

“I would also like to take this opportunity to thank the Castlereagh LAC for their continued support. It is through the hard work, persistence and dedication of the Police ACLO Graham Ruttley, that this is an overwhelming success.
Castlereagh LAC Superintendent James Stewart believes that Ian’s legacy recognises the importance of Police being seen as part of their community. “Ian is often remembered by townspeople and police as being community minded, dedicated to his family and a good Police Officer. The EA Dennis Memorial Shield is a fitting way to recognise his contribution to the community of Walgett, and for Police to be seen as part of the community.”

The event is integral to improving communication and understanding between Castlereagh LAC police and the Walgett Aboriginal Community. It aligns with the Aboriginal Strategic Direction (ASD) 2012-2017, through the promotion of Aboriginal community ownership and involvement. It addresses all four of the priority areas as outlined in the ASD 2012-2017 document; particularly Priority 2 (Improve Communication and Understanding between police and Aboriginal People), by fostering the belief that police are an essential part of the community, and offering positive role models and connections for troubled youth and families.

The match is supported by an ASD Crime Prevention Grant as a key initiative to address the over-representation of Aboriginal people in the criminal justice system.

The match is strongly tied to Goals 16 and 17 of the NSW 2021 (State Plan), through its focus on preventing and reducing crime, and decreasing juvenile and adult re-offending. “Sport is an essential part of our community. Through sport we can cross cultural and societal gaps, and encourage participation and integration. Events like the ‘EA’ Dennis cricket match can lead to better understanding, cooperation and partnerships within our local community,” said Castlereagh LAC Crime Coordinator, Sergeant Lisa Jones.

A respected and admired policeman described as “a role model for the Aboriginal community” has died in hospital.

Senior Constable Ian Ross Dennis was admitted to Sydney’s Prince of Wales Hospital on Monday but died from a viral infection yesterday morning .

The 47-year-old father of three was born and raised in Walgett, and after joining the force he served in country communities including Dubbo and Lightning Ridge.

Mr Dennis started off his career as a panel beater in Walgett before he went to work in Bathurst as a plant operator for Evans Shire Council.

He stayed there for 13 years, until at the age of 30 he decided to become a police officer.

Mr Dennis proudly graduated from the NSW Police College in Goulburn in 1987.

“To lose an officer not only of Senior Constable Dennis’ calibre, but a man of his integrity, is a terrible loss,” NSW Police Commissioner Ken Moroney said.

“He was a wonderful character and was always happy, always there with a joke,” Superintendent Single said.

“Senior Constable Dennis was an excellent role model for the Aboriginal community.

When he first joined the force Mr Dennis was a general duties officer at Bathurst until December 1992.

In July 1997 Mr Dennis moved to Dubbo and was among our local ranks for three years until early 2000.

He then moved to Lightning Ridge for two years and eventually returned to Walgett police station, where he was serving until his death.

Mr Dennis is survived by his wife Anne, their sons Damian and Timothy, a daughter Geraldine and two grandchildren.

Tributes are being paid to a Walgett-based policeman who died in hospital in Sydney yesterday after a viral infection.

Senior Constable Ian Ross Dennis, 47, had been admitted to the Prince of Wales Hospital in July.

Senior Constable Dennis worked as a panel beater and plant operator in Bathurst before joining the police force where he served in Tamworth, Lightning Ridge, Dubbo and Walgett.

He participated in the Walgett community, spending a lot of time with the town’s young people. 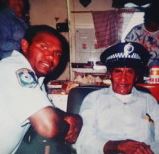 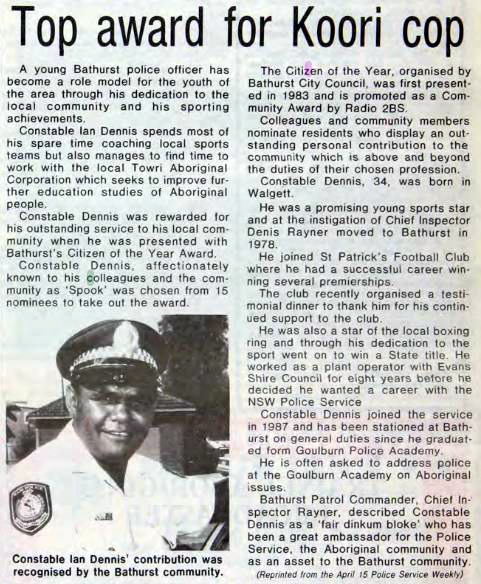 […] police officer also was mourned today – Senior Constable Ian Ross Dennis, based in Walgett, north-west NSW, who died in hospital after a short battle with an illness, aged […]

Ian (EA) Dennis was my mate and a friend to many. For many years the NSWPF had him traveling within western NSW resolving problems where it was feared police actions may have resulted in major social unrest, i.e. a fatal shooting at the Aboriginal reserve at Bourke. Ian solved problems through the respect he had among Aboriginal people, his decency and love of the job. He wanted to go home to Walgett and the closest the police family could get him was Lightning Ridge some 75k’s from Walgett. He traveled too and from every day before he fell ill and… Read more »