TERRIBLE TRAGEDY.  A terrible tragedy was enacted this afternoon at Penrith. A coloured man, a stranger in the town, was observed by Sergeant Beatty to be throwing stones at passers-by. The officer warned him to desist, and was in the act of arresting him when he drew a knife and stabbed Beatty in the chest, the weapon going completely through his body. Beatty called out, and Constable Mosley came to his assistance, armed with a revolver. Mosley [Moseley]fired at the coloured man, who was in the act of running away, but missed. A second shot, however, took effect, and the fugitive reeled and was about to fall, when a young man named Zolliner [John Zahnliter] seized him. Both men rolled over on the street, and the coloured man drew the knife again and stabbed Zolliner. He was ultimately seized and taken to the lock-up. Sergeant Beatty, who is not expected to recover, has had his dying depositions taken. Zolliner’s wound is not serious. 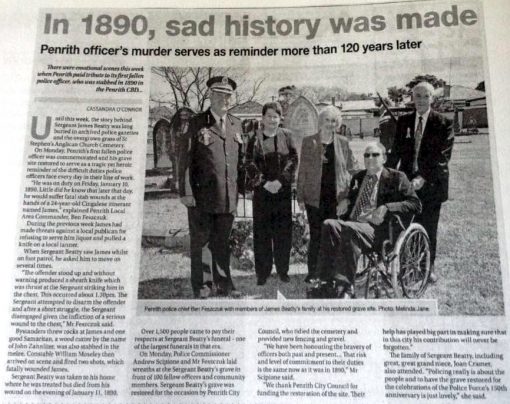 “About 1.30pm on 10 January 1890, Sergeant James Beatty had occasion to interact with an itinerant Cingalese named James in High Street, Penrith outside the Convent of the Sisters of St Joseph. During that interaction the Sergeant was stabbed in the chest.

In the meantime, the offender was contained by townspeople pending the arrival of Constable Moseley who shot the offender. A good Samaritan named John Zahnliter was also stabbed during the melee. Sergeant Beatty died of his wound on the evening of 11 January 1890. He was survived by his widow Margaretta, four sons and two daughters.”

On 3rd September, 2012, as part of the 150th Anniversary of the NSW Police Force, a commemorative service was held at Sergeant Beatty’s gravesite to honour his sacrifice, the event a joint venture between Council and Penrith Local Area Command.

Sergeant Beatty’s monument was in a dilapidated and damaged state. Council arranged and funded the restoration of the monument to its former glory by master stonemasons, Monuments in Memoriam who are based at Rookwood Necropolis. All restoration work was in accordance with the National Trust of Australia (NSW) Guidelines for Cemetery Conservation, the Burra Charter and Penrith City Council’s LEP.

Since 1982, Penrith City Council has been the trustee of this significant churchyard cemetery which dates from 1838 with full responsibility for its care and maintenance. The Public Domain Amenity and Safety two man cemeteries crew, maintain five cemeteries, Penrith, St Marys, Emu Plains, Castlereagh and St Stephens.

In preparation for the occasion an intensive clean up of the cemetery took place with staff from the City Presentation Group – Parks, Public Domain and Cemetery Operations spending a day in the cemetery. The heritage nature of the cemetery and fragility of the monuments meant that whipper snippers could not be used and all trimming around and inside monuments was by hand.

Fragile heritage cemeteries are protected by the grasses that grow around and inside the monuments. Plans of Management are currently being prepared for the cemeteries under Council’s control and the consultant’s recommendation for St Stephens is that we should avoid overly detailed or manicured works. The Cemetery should look old, avoid pristine maintenance and maintain the wild character of the grasses within the grave enclosures.

Miss Alicia Beatty (68), who died on 2nd inst. and was buried in St. Stephen’s cemetery, Penrith on 3rd, was the daughter of Sergt James Beatty, who was fatally stabbed by a Cingalese in High Street, Penrith, on January 10, 1890, an incident that is often referred to by the older generation of the district.

The story, briefly told, is that the Cingalese had been prowling around the town for a few days and on the day of the tragedy was ” moved on ” by the Sergt, who followed him for some distance. The man then sat down on the pavement near the Convent and Sergt. Beatty, not liking his appearance, again ordered him to clear out.

The Cingalese started to his feet and, without any warning, drew a sheath knife and, rushing in, stabbed the Sergeant in the chest.

A man named John Zahnliter tried to disarm the assailant and was stabbed in the side.

The Cingalese was shot by Constable Moseley.

Sergt Beatty and the Cingalese died subsequently of their wounds, and Zahnliter recovered, though he suffered severe physical disability, for which he received a pension, till his death many years afterward.

Miss Beatty was buried alongside her late father and mother, in the old St. Stephen’s cemetery. Mrs. Beatty died on August 12, 1916.

[…] Sergeant Beatty of Penrith was stabbed to death in February, 1890 by a native of India. He also stabbed John Zahnliter who endevoured to apprehend him and save Beatty. The Indian was shot by Constable Mosdey. […]