About 4pm on 12 January, 1922 Constable Donovan left the Brewarrina Police Station to carry out some enquiries. About 45 minutes later he was hurrying back to the police station to avoid an approaching thunderstorm when he was hit by lightning in Bathurst Street, about 150 metres from the station. A subsequent inquest heard that the cap badge and metal buttons had been blown off the constable’s uniform with some buttons being found up to 50 metres from the body.

A telegram was received last evening by the Inspector-General of Police (Mr. Mitchell) from Sergeant Brandon at Brewarrina, stating that Constable Donovan of that station had been struck dead by lightning at 4.15 p.m.

The constable was aged 28 years at the time of his death and was stationed at Brewarrina.

Amazingly, the only two recorded NSW police deaths by lightning strike occurred on the same date, sixty years – to the day, apart.  The other being Constable James QUINN who was struck at Cockatoo Island, Sydney, NSW, on the 12 January 1862.

From Ken Medway on 5 April 2014 on Beyond Courage Facebook page:

A thorough search of the cemetery at Brewarrina, NSW, failed to locate the grave of John Charles DONOVAN aka DONAVON who is also recorded as being buried there. Inquiries with Brewarrina Shire revealed that all records were destroyed some years ago so his precise whereabouts will probably never be known. 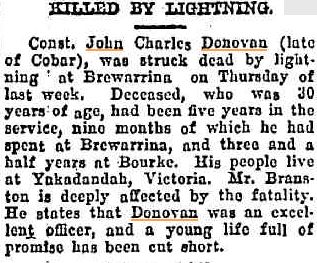 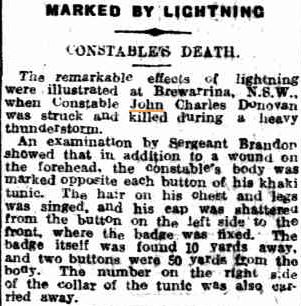 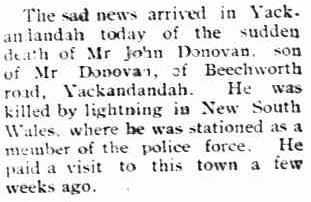 The Tragic End of Constable J. C. Donovan.
A Yackandandah Native.
The township of Brewarrina is situated in the western portion of New South Wales on the Barwon River, a tributary of the Darling. In April last year Constable J. C. Donovan, son of Mr John Donovan, of Yackandandah, was transferred from Cobar. On Thursday afternoon Constable Donovan went on duty at 4.30 p.m., and immediately left the police station to make some official inquiries and was hurrying back to the station to avoid an approaching storm when he was struck down in the street by lightning, within 150 yards of the station. From the medical examination, it was apparent that the lightning struck him on the forehead over the left eye, which corresponded with the position of the metal button on the peak of the cap. The body was also scorched and burnt just where the buttons would be on the police uniform. The buttons and metal numbers were found blown off the uniform, several buttons being found in the street 50 yards away. The right heel and left sole of the boots were also blown off. Two men named Hutchinson and Smith were also in the street at the time and felt the shock the lightning. At the inquest the Coroner paid a tribute to deceased, and stated the whole town and district would mourn the loss of such an efficient and promising officer.

Requiem Mass was celebrated in St Patrick’s Church by the Rev. Father Behan, P.P., for the repose of the soul of the departed officer on Friday morning. Sergeant Brandon and Constable Korn, his brother officers, were the very esence of kindness throughout the lamentable affair and were deeply affected by the tragedy. The funeral left the Court House at 4 o’clock on Friday afternoon and was largely attended. The handsome silver mounted casket containing the remains was completely smothered in floral tributes. The last sacred rites at the grave-side were performed by the Rev. Father Behan (says the Brewarrina Times). When the body was lowered to the grave (which is beside that of the Late Constable B. J. J. Dowling, who was killed in 1822) the large concourse of people returned to the town, and thus has passed away one to whom the words of Mark Antony referring to the death of Brutus, can well be applied : —
His life was gentle and the elements
So mixed in him that Nature might stand up
And say to all the world ” This was a man. ”

Prayers were read on Sunday in St. Patrick’s Church by the Rev. Father Behan for the repose of the soul of Constable Donovan, after which Chopin’s funeral march was impressively played by Mrs Butler.

Sergeant Brandon in the course of a lengthy letter of condolence to the bereaved relatives said : — ” Mass was said for him this morning at 7 a.m. and the good Priest attended at the Police Station and performed the last sad rites at the bed side. Candles were burned, which I am preserving and am forwarding some floral tributes and cards of sympathy, which I have been requested to convey to you. You will see by them that your dear boy was held in the highest esteem both by rich and poor. His sudden death has cast quite a gloom over the little township. I intend to arrange for a paragraph of ” Return Thanks’ ” to appear in the local paper on your behalf. You will quite understand that the cards of sympathy are addressed to me because his friends here did not know where to send them. I do hope that it will be consoling to you to know and see the respect and esteem shown ; when you take into consideration the short period he has resided here. He arrived at Brewarrina on transfer from Cobar on the 5th. April, 1921, and has been a credit to his Parents, the Police Department and himself. I can assure you no one will miss him more than I will. It is very difficult to replace men of his character and ability, strictly sober, no day too long when there was work to do, confidential, scrupulously clean and tidy in his person and room, and most reliable in the performance of his duty. I mourn with you in the loss you and the Department have sustained by his death ”

The relatives decided to have the body re-interred in Yackandandah Cemetery.
The coffin was railed to Albury from Brewarrina and conveyed to Yackandanduh cemetery on Saturday afternoon by motor. A large attendance of mourners waited at the gate of the cemetery and several others drove along Albury road and formed a cortege to accompany the motor hearse.

Father Griffin read the service at the grave-side. The late Mr John Donovan, who was born in Yackandandah, resided in this township during his young days, and was well known and highly respected. Within the last few months he paid a visit to the district and renewed old friendships. His untimely end is regretted throughout the district and the deepest sympathy is felt for his relatives.

Due to the fact that all of the newspaper articles and other documentation state that DONOVAN died on the 12 January 1922, I would say, with a fair deal of certainty, that the date on this grave stone of 12 January 1921 is INCORRECT.

John DONOVAN was originally buried at Brewarrina, NSW, the day after his death but re-interred at Yackandandah Cemetery, Victoria, pre 27 January 1921.

Donovan was buried at Brewarrina close to these co-ordinates: