Awards:  No Find in Australian Honours 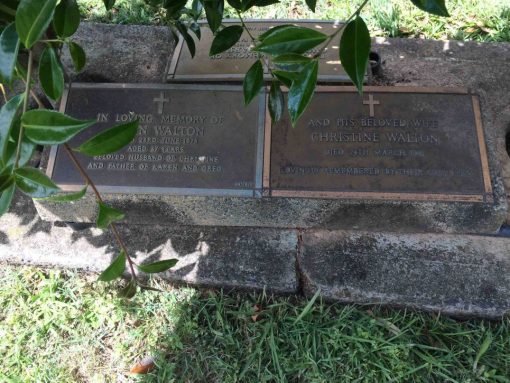 About 2.45am on 23 June, 1978 Sergeant Walton was a passenger in a police vehicle travelling along Carlingford Road, Carlingford. A vehicle approaching in the opposite direction drove onto the incorrect side of the roadway, forcing the police vehicle off the road where it collided with a parked horse float which was parked, without lights, on the southern side of Carlingford Rd at the intersection of Glenview Parade. Detective Sergeant Walton was killed instantly.  Extensive inquiries made to locate the driver of the unknown vehicle responsible for this accident have to date proved unsuccessful.

The sergeant was born in 1941 and joined the New South Wales Police Force, as a Cadet, on 7 July 1958. At the time of his death he was attached to the Armed Hold-up Squad.

Prior to joining the NSWPF, John was a Junior Clerk for 10 months then joined the NSWPF Cadet system from the 7 July 1958 and finished on the 17 August 1958 for reasons unknown to me.

He then appears to have been a General Hand for 4 months and then a Clerk for 18 months before coming back to the NSWPF – Attesting as a Probationary Constable on the 15 August 1960.  His re-join date is also unknown to me.

He was 5′ 11″ tall, 12 stone 12 lb in weight with Hazel eyes, brown hair and of a medium build.  He was born in Young, NSW and was single at the time of joining but married on 23 November 1963.  He obtained his School Intermediate Certificate.

He also completed a three day course in Civil Defence in 1961.

He passed his Constable 1st Class exams on the 22 September 1964.

He passed the Detective qualification course on 25 October 1967 and was designated a Detective on the 22 March 1968.

On the 14 November 1977 he was ” Commended for the good policemanship, excellent teamwork and devotion to duty he displayed as one of the Police responsible for the prompt arrest of Phillip WESTERN, Michael STOGIO, Lawrence JOHNSON and Robert PATTEN for the armed hold-up of the Randwick Branch of the Bank of New South Wales on 29 December 1975.

During committal proceeding at the Central Court of Petty Sessions on 28 April 1976 the Chief Stipendiary Magistrate, Mr. Farquhar, complimented him, along with all Police connected with the case while His Honour, Judge Muir, in passing sentence on the offenders made favourable comment regarding the briefs prepared by Police for the trial.