On the morning of 3 February, 1865 Constable Ward was returning to Coonabarabran from a prisoner escort to Mudgee. Near the locality known as Barney’s Reef he was informed that a Chinese gold miner, Sam Poo, thought to be mentally unbalanced, started sticking up people on the road to Mudgee.  He also kidnapped and raped a young woman. Ward was told that Poo was nearby in the scrub. After a short search Constable Ward located the offender’s camp and approached him. When the offender saw the constable he ran into the bush.  Ward rode after him, and when he caught up, called on him to stand and drop his weapon ( a cut down shotgun ).  Sam Poo aimed at the trooper and said “You policeman – me fire”.

The Trooper leapt from his horse and tried to use the animal as cover as he drew his Colt navy revolver.  Ward‘s hesitancy in shooting the Chinaman proved to be fatal for him, for Sam Poo fired, hitting the policeman in the pelvic area.  Ward fell to the ground, discharging one shot from his Colt in the process.  He then fired twice more at the Chinaman, who was running away through the bush.

The trooper lay bleeding on the ground until he was found by Mr M J F Plunkett, the squatter on whose run the shoot out had taken place. Plunkett arranged for Ward to be taken to his homestead, and sent for the doctor who lived 50 miles away. The doctor arrived the next day, but examination showed that Ward was beyond medical help.

The trooper told Mr Plunkett that he knew he was dying and asked what would become of his wife and family. Later he dictated a full statement about his encounter with Sam Poo to the squatter. Ward said he was a member of the Church of England, and asked Plunkett to pray for him. This the squatter did using a book of Common Prayer. The trooper then asked the squatter to send for his wife and family. However, John Ward died shortly after giving his request, passing away on 4th February 1865. His family arrived at the homestead after he had been buried.

A meeting was held in Mudgee, where a large sum of money was raised for Senior-Constable John Ward’s widow and children. This support acknowledged the supreme sacrifice the trooper had made in the performance of this duty.

The murderer, Chinese bushranger Sam Poo, thought to be mentally unbalanced, was later captured and hanged, as described by the Clarence and Richmond Examiner of 2 January, 1866.

EXECUTION, AT BATHURST: Wednesday’s Free Press states that on the previous day, the Chinese convict Sam Poo, who at the last assizes was convicted of the murder of constable Ward, suffered the extreme penalty of the law, within the precincts of the gaol. In the absence of any of his countrymen outside the prison walls, three Chinese prisoners, who are at present confined in Darlinghurst Gaol, were brought to see the end of Sam Poo, there were also about a dozen other persons present besides the police and the officers of the gaol. The wretched man, who, ever since his apprehension has been quite weak in intellect, appeared perfectly unconscious of his fate, and until his arms were pinioned by the executioners, stood in the door of his cell clapping his hands. The ceremony of pinioning over, he was led to the gallows without speaking a word, or even lifting his head. The rope was fixed, the bolt drawn and Sam Poo ceased to exist. The body was, after the lapse of little more than half an hour, cut down, and taken away for burial.

The senior constable was born in England in 1829 and joined the police force on 1 February, 1858. In 1862 he became a member of the newly-formed New South Wales Police Force as a mounted trooper. At the time of his death he was stationed at Coonabarabran.

Fallen officer is honoured 150 years on

IT’S not unusual that the state’s most senior policemen, the mayor and local MP would turn out on Monday to attend the memorial service for an officer lost in the line of duty.

Senior Constable John Ward was shot at point blank range and died the next day from his appalling injuries. The dignitaries stood in silence enduring steady rain as the prayers and dedications were delivered at Birriwa Station near Coonabarabran.

What makes the scene rather remarkable is that the officer’s blood was spilt almost one and a half centuries ago.

The gold prospector, apparently weary of thin pickings on the Talbragar claims, decided to switch jobs and take up bushranging. Fellow diggers were alarmed by news a man reported to look like a Chinaman had stuck up a woman and her little girl on the Mudgee Road. There were more reports of a Chinaman ”bailing up” travellers.

Ward, married with five children and with five years’ experience in the police force, was soon on his trail. On seeing his man after some hard riding, he called out ”Put down that gun.”

Poo responded: ”Me fire: you policeman.” And he did.

A stockman took the officer to his homestead. The nearest doctor travelled 80 kilometres to tend to him, arriving the next day.

By then Ward was reportedly beyond the reach of human aid and died soon after.

Two weeks later three constables aided by a ”smart half-caste Aboriginal stockman and tracker Harry Hughes” found Poo hiding in scrub. The fugitive was shot in the neck. He recovered at Mudgee Hospital and was later convicted of murder. He was hanged at Bathurst Jail in 1866.

Fast forward to the service last week, part of the NSW Police Force recognition of the sacrifice made by officers over 150 years of policing.

Inspector Scott Tanner, of the Mudgee area command, said: ”We were looking at how to mark the 150 years of policing. We have a plaque in Coonabarabran police station to John Ward and then there was the loss of Dave Rixon [the senior constable shot dead in Tamworth last March] so we started thinking about how to also remember John Ward – he walked the same streets that we walk today. When I first came here I lived in the house he had lived in.” 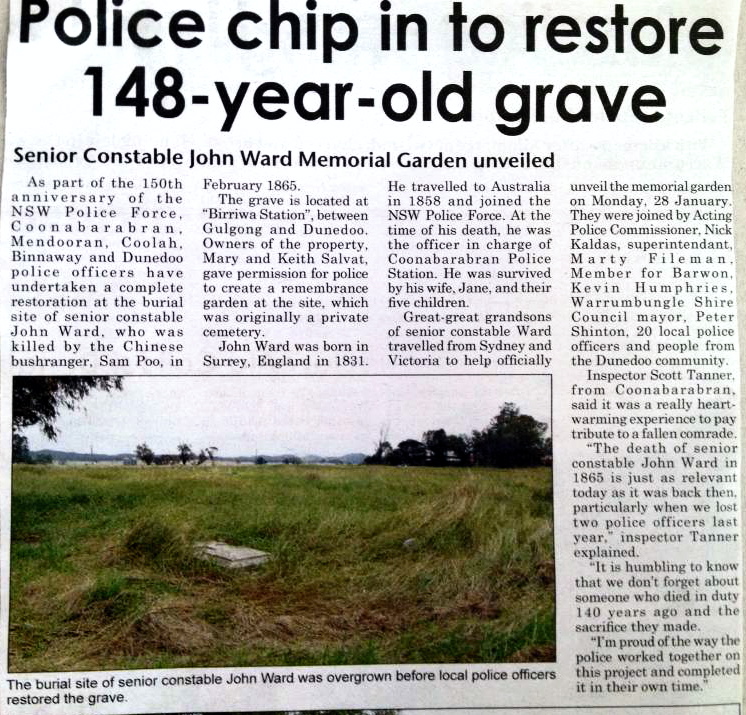 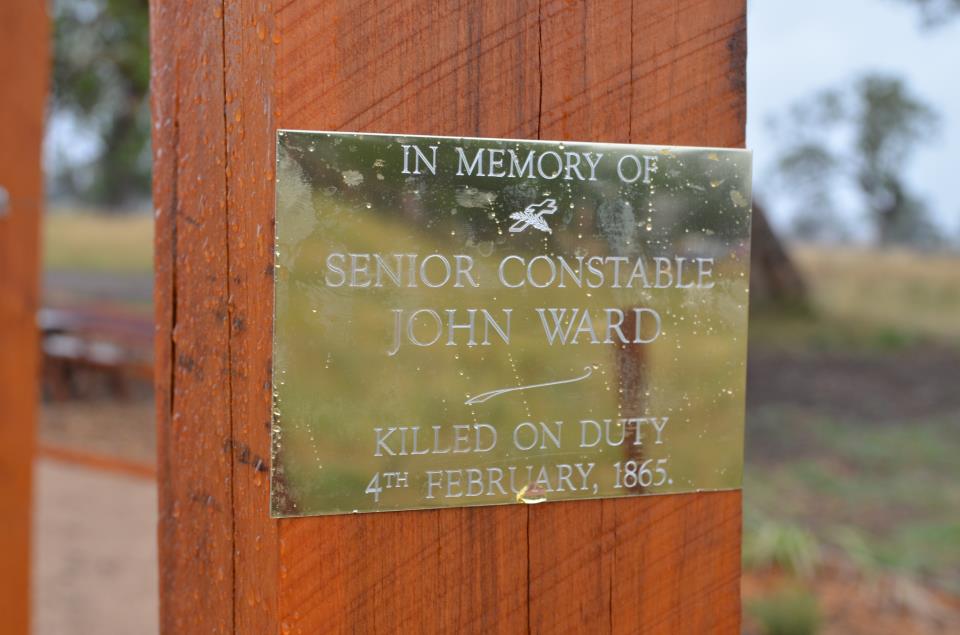 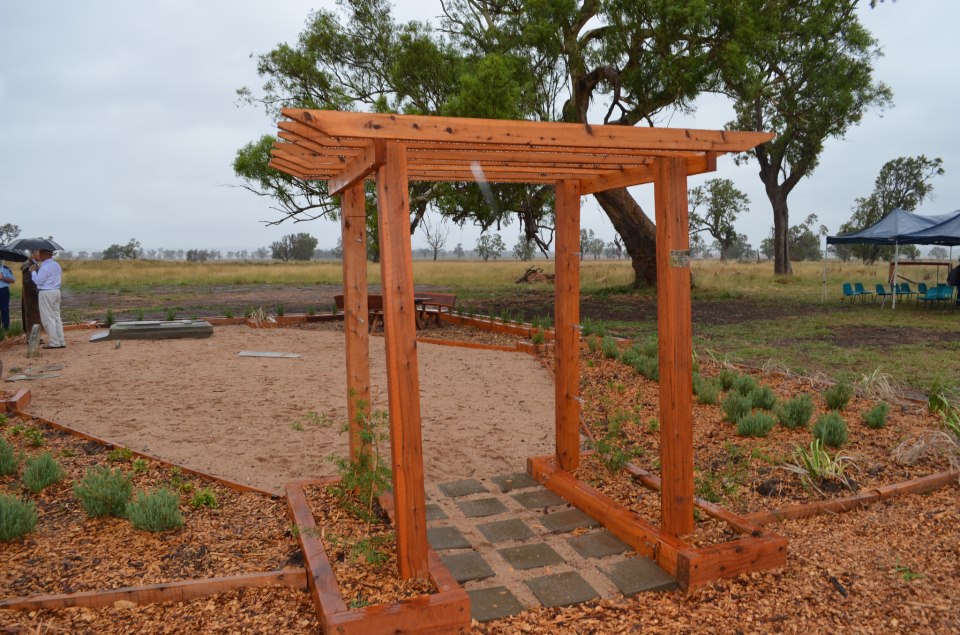 The owners of Birriwa Homestead, Mary and Keith Salvat, are working to rediscover and preserve the history of the sandstone house.

The property, on the Dunedoo side of Birriwa, has a long and rich history and often attracts visitors who remember visiting the house as children.

Mrs Salvat said she wanted to use a new website being established at www.birriwahomestead.org to collect the stories surrounding the homestead, the balls it hosted and the families who lived or worked there.

Mrs Salvat said she wanted to create an opportunity for families with connections to the house to reach each other and share stories that could otherwise be lost.

“We’re just beginning a journey of rediscovering the history,” she said.

The website is under development, and currently consists of a form that can be used to submit stories to be published on the website, or to ask to be alerted when the site launches.

“The purpose is really to act as a library – a 21st Century library.”

She said a house was bricks and mortar, but at the same time, it contained a subtle energy left by the people who had lived there or developed a connection with the place.

The Salvats have owned Birriwa Homestead for 15 years, and maintained and restored it while living in Sydney before moving there permanently in 2009.

They are often visited by descendants of the families who owned the house in the past – the Lanes, Cowards, Lowes and McMasters – including a 90-year-old woman who remembered playing in the garden as a very small child.

The property was opened on Monday for the dedication of a memorial garden surrounding the grave of Senior Constable John Ward, who was shot by a bushranger at Birriwa in 1865.

As well as police and descendents of Senior Constable Ward, guests included people who were raised at the homestead, a former Birriwa jackaroo, and a neighbour whose family had lived on the next property for three generations.

The memorial garden includes infant graves alongside the grave of Senior Constable Ward, and others that are unidentified as the stones and crosses have been washed away.

Mrs Salvat said working with the police on the project had been a wonderful experience.

“They were very respectful and incredibly well-mannered,” she said.

“This has been a beautiful journey for me and my husband over the last 12 months.”

Mr Salvat said the memorial garden made the grave site more approachable for members of the public who wouldn’t like to intrude on a private residence, while the planned website would allow visitors to read about the memorial before visiting.

Mrs Salvat plans to invite people with relatives buried at Birriwa Homestead to visit the property in autumn to plant trees that can bear plaques naming the people interred there.