Cause:  Assault – murdered with a wooden staff

This cemetery/land was resumed in 1901 to make way for Central Railway Station. It would appear that his remains and headstone were not relocated 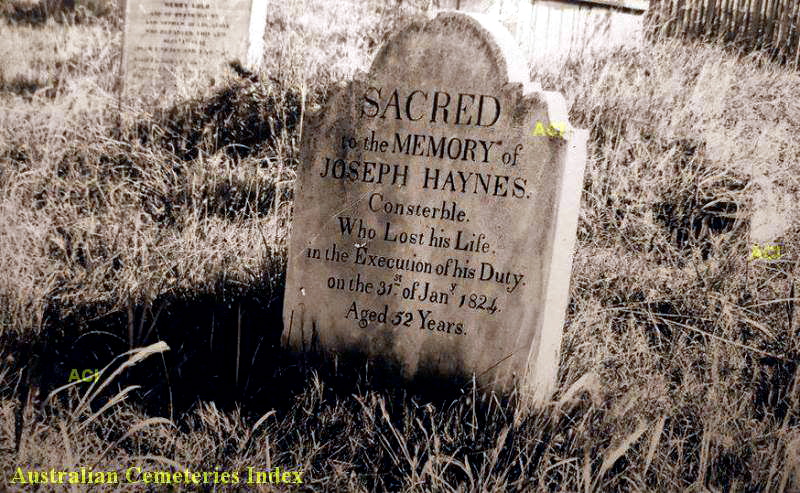 Thanks to Wayne Hill and his research regarding the discovery of his headstone.

Constable Haynes and Constable Thompson were on duty shortly after midnight on 26 January, 1824 in Sydney when they heard someone call out, “Stop thief”, which set up the hue and cry. They soon heard the footsteps of a number of people running towards them, and seized their opportunity to spring on the man being chased. Constable Thompson was quickly thrown or knocked down, and as he grappled with the offender, Haynes attempted to assist. Two other men then appeared and began attacking the two constables. At this time Thompson “received a blow on the head, which rendered him senseless, it is thought, for a considerable time”, and when he began to recover he heard a deep groaning sound nearby. On investigation he found Constables Haynes lying senseless in a pool of his own blood. The unfortunate man was immediately taken to hospital where he passed away about five days later. He had suffered severe head injuries, almost certainly caused by his own staff, which was found to have a considerable amount of blood and “small particles of skull” adhering to it.

A contemporary account of the circumstances of the constable’s death appeared in the Sydney Gazette and New South Wales Advertiser of the 5 February, 1824, declaring that “The murderous wretches, as there are three concerned, will not long escape it is devoutly to be hoped, the arm of relentless and crying justice.”

(The “hue and cry” meant that every able-bodied man in the vicinity had to join in the pursuit of the criminal. This practice evolved into the “warrant”. The staff carried by each constable was for his own protection. Sydney police weren’t given firearms as a general issue for another seventy years after this incident.)

Haynes had arrived in Australia on the First Fleet aboard the ship Alexander and received his Certificate of Freedom in 1810. He was originally tried at Gloucester on 13 July, 1785 for receiving stolen goods and was transported for 14 years. He was a married man and his wife Mary later made an application to the Governor of New South Wales for a police pension. He is sometimes recorded as Haines, Haynes or Hynes.

At the time of his death the constable was aged 52 years and was serving in Sydney. He served as a constable for over seven years.

Very pleased to announce that the Police Minister, The Hon. Troy Grant MP has awarded a grant to the NSW Police Memorial & Historical Society Inc in the amount of $55,000 to continue the work of marking and restoring the graves of NSW Police officers killed on duty.

Sincere thanks to Danny Webster and Ken Medway, who collectively provided much of the background research and information to support the application, and Ministry staff. A thank you also to those that have offered to assist and be a local point of contact for some of the memorial sites.

A priority list of sites for restoration has been prepared based on criteria such as those sites that remain unmarked, or in need of urgent repairs. We hope to attend to over 20 locations with this funding.

This is a significant step in carrying out much needed work on these sites, we are extremely grateful to the Minister, and hope this will lead to ongoing support. I’d appreciate it if you could share this around your police contacts.

TOWN AND DISTRICT OF SYDNEY.

An inquest was convened by George Milndr Slade Esq. Coroner, on Sunday last ( 1 February ), on the body of Joseph Hynes, a constable in the Town of Sydney. It appeared that the deceased was on duty on the previous Monday night ( 26 January ), near Hill’s Tavern, in company with another constable, named Thompson. Between the hours of 12 and 1 o’clock, there was the hue and cry of ” Stop thief” set up ; and, at the same moment, the steps of some persons running towards them. The watchmen put themselves in a detecting posture, and sprang at one man with a hat under his arm ; a scuffle ensued ; and Thompson was thrown down by his opponent. Hynes, the lamented deceased, forthwith went to his assistance ; and, whilst in the act of attempting to secure the fellow, and release Thompson from his grasp, the latter observed two other men, as he lay on the ground, advancing towards them ; and immediately afterwards received a blow on the head, which rendered him senseless, it is thought, for a considerable time.

When Thompson recovered from the violence he had experienced, the first thing that attracted attention was deep groaning. He went to the spot, and found unfortunate Hynes prostrate, weltering in his blood ; The villain had left the hat behind him which, with the staff and hat of the deceased, were lying close to him. The poor man was carried to the Hospital, where, notwithstanding every effort of skill and humanity, he lingered till Saturday night last ( 31 January ), when death relieved him from intense suffering. The deed appears to have been committed with the staff, as it was much stained with blood, and had some small particles of the skull adhering to it, from the severity of the blows.

The murderous wretches, as there are three concerned, will not long escape it is devoutly to be hoped, the arm of relentless and crying Justice.— The inhabitants should co-operate in every possible way, with Government, to bring the monsters to an early doom.— The Verdict was — Wilful Murder against some person or persons unknown.

If we may at liberty to suggest an opinion upon the above transaction, we think that pecuniary reward can have but little influence upon the mind of a murderer. There are, it is said, three parties concerned, dreading each other : as to confidence, there can be but little. If one of the three had only a hope of securing himself, the two would speedily be within the precincts of Justice, and the other would have to wander out his days, like a true descendant of Cain.

WHEREAS Joseph Hynes, a Constable at Sydney, was, on the Night of the 26th of January last, whilst in the Execution of his Duty, and having Charge of a Prisoner for Felony, violently beat and so severely wounded and injured, by some Person or Persons unknown; that the said Joseph Hynes hath since died of the Wounds he received on that Occasion ;— And the Coroner’s Inquest having pronounced a Verdict of Wilful Murder against some Person or Persons unknown ; in Order to bring the Offender or Offenders to Justice, a Reward of Two Hundred Spanish Dollars is hereby offered and will be paid to any Person who shall come forward and give such Information as will convict the Offender or Offenders, concerned in the said Murder.

MORE than 200 years after Constable Joseph Luker was bashed to death while investigating a robbery near a Sydney brothel, the officer’s grave has finally been found again.

With the discovery of Constable Luker‘s original grave under Town Hall, the police have solved a Sydney mystery over the burial site of the first officer in Sydney to die on duty.

As the force prepares to commemorate fallen officers on Police Remembrance Day today, the story of Constable Luker’s final resting place can finally be told.

After years searching graveyard records, recent excavations under the Town Hall have revealed Constable Luker was buried in the Old Sydney Burial Ground, which was used from 1792 to 1820. Constable Luker’s grave was marked “assassinated“.

Records show the bodies of three policemen, including Constable Luker, were exhumed in 1869 when building began on the Town Hall site and they were interred at Rookwood Cemetery in Sydney’s west.

“It is important to police as an organisation that we ensure we honour and pay respect to those who have served before us and that is why we have continued to search for Joseph Luker’s burial place,” Police Commissioner Andrew Scipione said yesterday.

“Joseph Luker paid the highest price for protecting the citizens of the then fledgling colony. No organisation should ever forget the sacrifices of its staff.”

Sydney City Council found records showing another two officers, Constables Joseph Haynes and John Farmer, were buried on the Town Hall site but nothing is known about how they died.

Constable Luker was on a midnight patrol after a spate of burglaries near prostitute Mary Breeze’s brothel in Phillip St, then known as Back Row, east Sydney Town, in August 1803.

He had been beaten to death and his cutlass guard was wedged in his skull when his body was found near Macquarie St.

In one of the first scandals to rock the police, two of his colleagues were suspected but were never convicted.

A message to his killers was posted on his headstone at the Town Hall site telling them: “My midnight vigils are no more, Cold Sleep and Peace succeed . . . But when my murderers appear, before JEHOVAH’s Throne, Mine will be to vanquish there, And theirs t’endure alone.”

The 35-year-old was a convict who served seven years transportation before joining a fledgling police force.

Mr Scipione urged people to wear a blue ribbon on the right-hand side of their shirt today to show support for police. He said remembering lost officers was a way to offer continued support and comfort to their families.

“It means we will never forget their courage and sacrifice,” he added.

* Not known if these details refer to our Constable Joseph HAYNES & Mary.

[…] City Council found records showing another two officers, Constables Joseph Haynes and John Farmer, were buried on the Town Hall site but nothing is known about how they […]

[…] City Council found records showing another two officers, Constables Joseph Haynes and John Farmer, were buried on the Town Hall site but nothing is known about how they […]