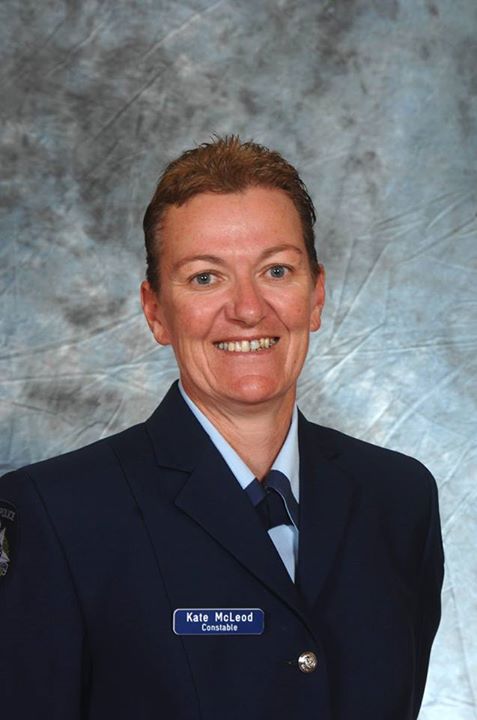 A police officer has been killed in Victoria’s east after her motorcycle and a four-wheel-drive vehicle collided.

The collision on the Princes Highway near Lindenow South, 20 kilometres from Bairnsdale in Gippsland, occurred about 7am on Wednesday and was being investigated by the police major collision unit.

It is understood the 53-year-old officer was travelling to work in Sale.

The male driver of the 4WD vehicle, who is believed to be a Gippsland-based doctor, was assisting police with their inquiries.

The Princes Highway was blocked in both directions, with traffic diverted at Benworden Road.

Police confirmed the victim was a senior constable from an Eastern Region police station but made no further comment.

Anyone with information about the crash is urged to contact Crime Stoppers on1800 333 000.

As some of you may know, yesterday one of our members, Senior Constable Kate McLeod was tragically killed in a road accident while travelling to work in Eastern Victoria.

The Police Association Victoria would like to offer our sincerest condolences to Kate’s family, friends and colleagues. We would like to remind them that we are here to support you in any way we can.

We know that our community would also like to offer their condolences to Kate’s family and police colleagues in Gippsland.

Yvette Frans We will miss you Katie, you have been taken from us way to soon in a senseless way.Lisa will miss having you by her side
[divider_dotted]
Dave N Sam Giles Farewell Kate you were a great copper and awesome to work with on jobs. We’ll miss you! Rest easy.
[divider_dotted]
Kayanne Bradzgal Bennett Oh lord …..i didnt realise it was you!!! Deadset one of the nicest police officers iv ever met…#madrespect….. RIP……
[divider_dotted]
Shelie Ezard Tragicically taken , my daughter worked along side you, it shows to hold our loved ones so much closer and never take a day for granted
[divider_dotted]
Sonia Louise so sorry b’dale bandits’ Nautilus7497
[divider_dotted]
Kevin Powell Sorry for your loss Kate you will be remembered with the honoured dead
[divider_dotted]
Charles Machen Kate, I know you struggled when you first came to Bairnsdale but you certainly shone. You put in more then most. It was a pleasure to have known you.
[divider_dotted]
Steve Anderson No words Kate. Just memories of long conversations you always ended, debates you always won, and most of all that true friendship we built from the ground up. I will miss you mate. Everyday.
[divider_dotted]

THE driver of the four wheel drive vehicle involved in the death of a Sale police officer on Wednesday is facing charges of culpable driving and dangerous driving causing death.

Patrick Mattu, 30, from Bairnsdale, faced an out of sessions hearing on Wednesday night in Bairnsdale and was remanded to front Bairnsdale Magistrates’ Court on Thursday morning.

It is believed a four wheel drive vehicle was travelling east along the Princes Highway near Lindenow South when it and a motorcycle collided head-on about 7am.

The female rider of the motorcycle, whose name had not been released yesterday morning, died at the scene.

It is understood the 53-year-old Senior Constable was travelling to work in Sale and The Age reported that the driver of the four wheel drive was believed to be a Gippsland-based doctor.

The driver and his female passenger in the four wheel drive were not injured.

The Princes Highway was blocked in both directions, with traffic diverted at Bengworden Rd, as detectives from the Major Collision Investigation Unit examined the scene.

Police appeal for anyone with information about the collision to phone Crime Stoppers on 1800 333 000 or make a confidential report at www.crimestoppersvic.com.au.

A 30-year-old man from Bairnsdale, in south-east Victoria, has been charged with causing a crash that killed an off-duty police officer on Wednesday.

Senior Constable Kate McLeod was hit by a car while riding a motorcycle on the Princes Highway at Lindenow South, about 7:00am (AEDT), and died at the scene of the crash.

He has been charged with culpable driving and dangerous driving causing death.

[…] Constable Kate McLeod, a Sale police officer, was hit by a car when she was riding a motorbike on the Princess Highway at […]

My heart and prayers are with Lisa and all your family during this tragic time. R.I.P. Kate – you will be sorely missed