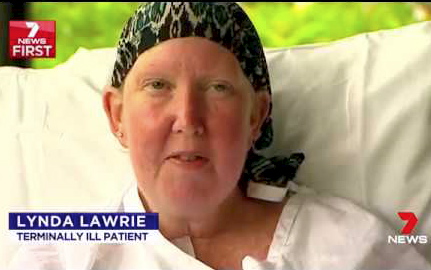 Following the death notification issued yesterday, all members are advised that a funeral service for the late Mrs Lynda Lawrie, rego 9141670 is to be held at the North Chapel, Pinegrove Memorial Park, Kington Street, Minchinbury on Thursday, 16 March 2017 at 1300hr. All friends and former colleagues are invited to attend.

The Lawrie family have accepted an offer of police involvement at the funeral service. The Penrith Local Area Command will provide a Guard of Honour at the chapel at the commencement of the service.

Lynda is suffering from terminal cancer. Her colleagues have established a ‘Go Fund Me’ page to raise money to provide facilities which will enable relatives of cancer sufferers to stay overnight at the hospital.

The fundraising page can be found at https://www.gofundme.com/lyndas-thank-you-to-ward4c-nccc.

Lynda Lawrie has been prescribed medical cannabis through ABC Cannabis medical clinic. The government have blocked her access. Share to help the dying mother have relief from pain in her final days.

Any Cancer patients needing a prescriber for medical cannabis please register on our website.
https://abccannabis.com.au/

A high school student has reportedly suffered an aneurysm after an attack by a schoolyard bully.

He was reportedly walking through the schoolyard at lunchtime and was punched from behind by a student, who has since been suspended.

He continued to be punched while face-down on the ground until a friend intervened, Channel 7 News said.

“The next thing I remember is being in the bathroom washing my face,” Josh said.

A police spokesman confirmed that Josh and his mother went to St Mary’s police station on Tuesday, the day after the incident, to report “an assault which is alleged to have occurred at a local high school”.

“After reporting the matter to police, the teen was taken to hospital by his mother for scans and treatment of head injuries,” the spokesman said.

Channel 7 News reported that the school initially sent Josh home with his mother Lynda Lawrie, rather than calling an ambulance.

The aneurysm only surfaced during later scans.

The teenager has since undergone brain surgery and will spend his school holidays in hospital.

“I’ve … got a major brain problem and he’s just going to get a suspension for that,” Josh told Channel 7 News.

“He’s wrecked my life and he’ll only get a slap on the wrist.

Channel 7 News reported that Josh has been told by doctors that he won’t be able to play sport again and will have to take blood thinning medication for the rest of his life. 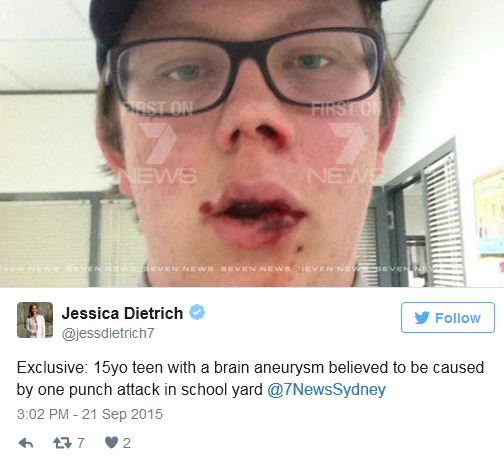 Josh has been repeatedly bullied at the school and his parents told Channel 7 News that they believe the offender should be held accountable.

Ms Lawrie said that the first thing she was asked when she brought her son to the hospital was why he wasn’t taken in by an ambulance.

His father Richard Lawrie said “young fellas have to realise what they are doing” and think about the consequences of their actions.

A police spokesman said: “Police have obtained a number of statements and are now conducting inquiries into the matter.”

The school has not released an official comment but told Channel 7 News that there are two sides to the story.

Our reason to Relay…

Thank you for visiting our team page. Relay For Life is our opportunity to join together to make a difference in our community. Each year thousands of Australians participate in Relays across Australia and our team is proud to be part of that. By joining or donating to our team, you will be helping Cancer Council save even more lives.  New South Wales Police Force take great pride in attending this years event for the 6th time.  This is a great community event and is a great way for Police to interact with our community in a positive way.  We once again look forward to meeting some fantastic people and engaging our community.