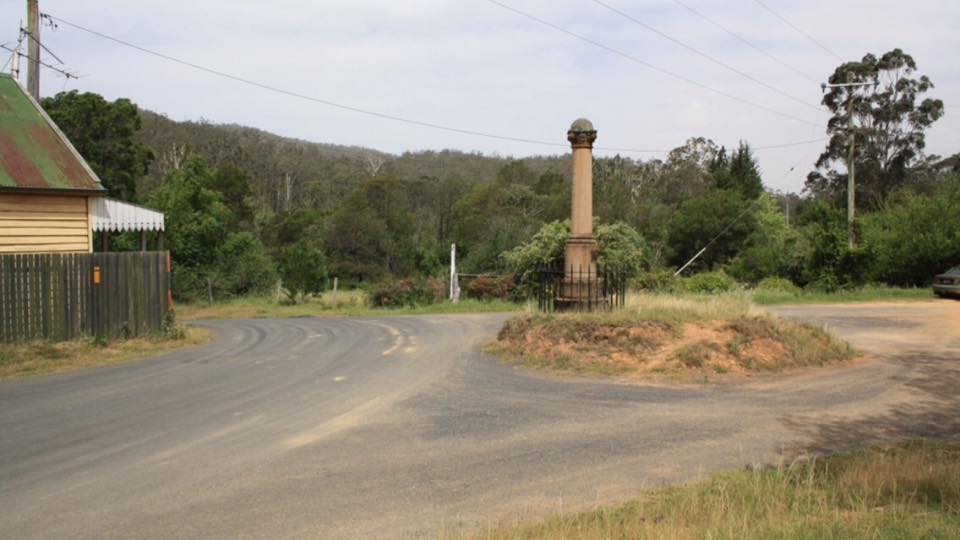 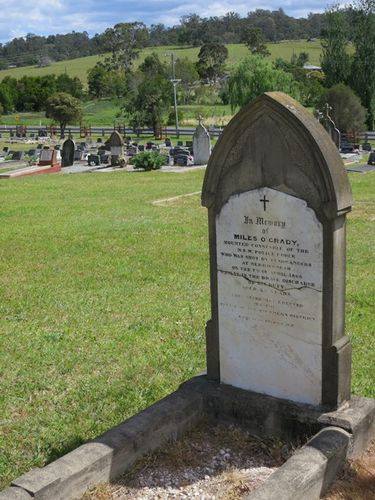 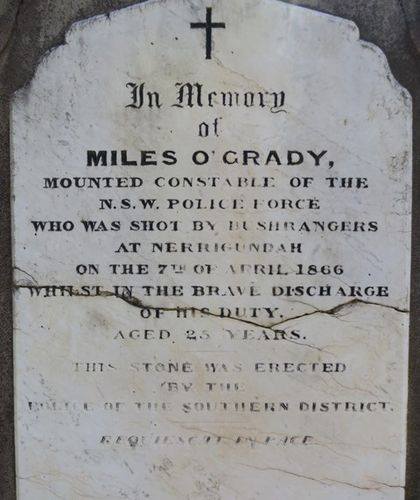 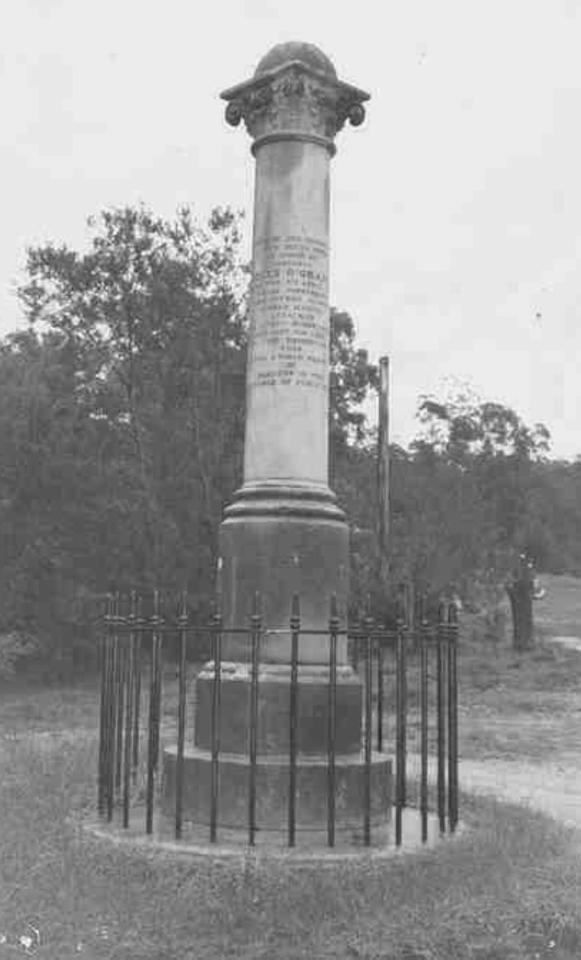 On the morning of 9 April, 1866 Thomas Clarke and his gang of bushrangers appeared at Deep Creek near the Gulph Goldfields and spent the day robbing passing travellers. At nearby Nerrigundah, 19 km west of Bodalla, Constable Patrick Smythe was performing his duties alone. Sergeant Nelson Hitch was absent at Braidwood Court and Constable O’Grady was in bed seriously ill with ‘colonial fever‘ (probably cholera). When Clarke learned of the police situation at Nerrigundah he led his gang into the township. Upon their arrival they held up Wallis’ Hotel and Pollock’s Store. Mrs Pollock (wife of the local gold buyer), however, threw the keys to the safe into the street and the gang spent considerable time searching for them in the darkness.

News of the events reached Constables Smythe and O’Grady at the police barracks and, against the wishes of his colleague, Miles O’Grady arose from his sick bed and dressed in his uniform. The two constables then set out to engage the bushrangers although O’Grady was very ill, and was having difficulty walking. As they approached Wallis’ Hotel, the police spotted the bushrangers and O’Grady fired, killing bushranger William Fletcher. In the ensuing gun battle O’Grady was shot in the side and as both police fell back, the gang ran to their horses and escaped. O’Grady was carried to the police barracks where he died a few hours later in great pain.

The Mercury newspaper dated 16 April, 1866 announced the constable’s unfortunate death from the wounds received, informing its readers that “Additional news respecting Clarke’s gang states that they burned down a settler’s homestead near Moruya and robbed Pollock’s station [store?]of £800, and several others of smaller amounts! Constable O’Grady has died of the wounds he received. The ringleader has been identified as Tommy Clarke. The Government is now taking steps to outlaw all connected.”

The constable was born in 1841 and joined the New South Wales Police Force on 15 June, 1863. At the time of his death he was stationed at Nerrigundah.

The Bushranger Thomas CONNELL. – This prisoner, who was arrested by sergeant Byrne on Wednesday last, was charged at the Braidwood police court on Monday with the murder of constable O’Grady, at Nerrigundah, on the 9th of April last, and remanded to Moruya, there to be dealt with. Yesterday morning he was forwarded under escort of the police to Nelligen, en route to Moruya. – Braidwood Dispatch.

At 1pm on 9 April,2016, a commemorative service and presentation will be held at the re furbished monument at Nerrigundah to commemorate the 150th anniversary of the murder of our brother, Miles O’GRADY, by members of the Clarke gang bushrangers. There will also be a presentation by the Moruya and districts historical society at 2pm. There will be a detachment from the mounted police as well as a flag party.

Well before anyone had heard of Ned Kelly, a gang of bushrangers robbed and murdered across an area from present day Canberra to the south-east coast of NSW.

The Clarke Gang have been dubbed “the bloodiest bushrangers”. They shot and wounded some of their victims, and killed others, and they’re suspected of killing all four of a police special squad sent from Sydney to track them down.

On April 9 1866 they killed Constable Miles O’Grady in a shootout in the then thriving mining town of Nerrigundah, which is now a quiet, isolated settlement of about 30 people, connected to the world by a public telephone.

Very little is left now of the many hotels, shops, houses and shacks that supported thousands of miners who came to the town during its 1860s gold rush, but a stone memorial to the murdered policeman stands proud.

The community and around 200 visitors gathered at that memorial on the 150th anniversary of the shootout to attend a NSW Police flag ceremony to honour Constable O’Grady.

The author of a book about the gang, Peter Smith, said that if bushrangers were measured by how violent they were, and how many people they murdered, then the Clarke Gang were at the top of the scale.

“They were a lawless lot that started off taking horses out of paddocks and returning the horses and claiming the rewards,” said Mr Smith.

“They drifted further into crime, then highway robbery, then full-scale bushranging.”

By the time they rode into Nerrigundah in April 1866 they had a fearsome reputation.

“They were an amalgamation of families that started in the area south of Braidwood,” Mr Smith said.

“The whole area south of Braidwood had a reputation for many years as a lawless area.”

The core of the gang comprised their leader Thomas Clarke and his brother John, together with their uncles, Pat and Tom Connell.

By 1865 Thomas Clarke had warrants issued for his arrest — for crimes that he denied.

He calculated that the police case was weak and he would avoid a conviction and so he surrendered at Braidwood. But the police by now regarded him as a notorious bushranger and were preparing cases that would see him imprisoned for a very long time.

Then when Clarke heard that he would be transferred to Goulburn Gaol and his trial heard there, he escaped from Braidwood Gaol.

“There was no return after that. He had to become a full-time bushranger,” Mr Smith said.

The gang came to Nerrigundah after travelling well south to the Bega races. Horse races were always an opportunity to steal another racehorse or perhaps someone’s winnings.

On their return north they held up the road leading into Nerrigundah, about five kilometres from town, robbing travellers as they came by. They shot and wounded one and beat up another.

Meanwhile, Constable O’Grady was severely ill in bed with what was then called colonial fever, his sergeant was away in Moruya, and the one remaining policeman was a newly arrived recruit, Constable Patrick Smythe.

Once they were outlawed … they could be shot by anybody. There was no reason to surrender.

“It’s difficult to know that they really intended to come into Nerrigundah in the first place,” Mr Smith said.

“When they found out that the place was basically unprotected, it’s probably when they thought they’d come into town.”

Leaving two of the gang to guard their captives, the gang rode into town. With them was a new member of the gang, William Fletcher. It was to be his only day as a bushranger.

They rode to one of the hotels and began taking captives and robbing them.

Mr Smith said the hotel was across the road from Pollocks Store where there was “probably 200 or 300 ounces of gold, which in present days would be worth a million dollars or more”.

Word got to O’Grady on his sick bed a little further down the road, and with Constable Smythe they made their way up the road to confront the bushrangers.

The publican of one of the other nearby hotels, Mrs Jones, tried to stop O’Grady as he was so ill he was staggering.

His response was, “I will do my duty.”

The two Constables confronted the gang outside the hotel. The bushranger William Fletcher was the first to be shot, and then Constable O’Grady was shot, and the gang fled the town.

“Once they’d murdered a police constable they were outlawed,” Mr Smith said.

“Once they were outlawed it meant that they had no rights. They could be shot by anybody. Basically they were already condemned to death. There was no reason to surrender. They were committed.”

The Clarke Gang would eventually be tracked down but not until after more robberies and more killings. Tommy Clarke and his brother John would get a one-day trial and then were hanged.

Ever since that day in Nerrigundah, Constable Miles O’Grady has been a police hero.

Speaking after the NSW Police flag ceremony, Detective Superintendent Kevin McNeil said, “The poignant moment in his death is when O’Grady is staggering and Mrs Jones says ‘Don’t go’ and he says ‘I will do my duty’. And from that point on he’s doing his duty for the people of New South Wales”.

“He knew what he was confronting. This Clarke Gang was very famous. He knew all about the Clarke Gang. Later on they killed four police at Jinden Station near Braidwood. That’s how violent they were.

“That was the moment, yet he still went out there because other people were at risk, to protect their life and property.”

[…] attack upon its party of bushrangers at Nerringundah on April 9, 1866 by a young constable named Miles O’Grady, led to the policeman being shot dead by Clark and Connell, two of the […]