Cause:  Suicide – jumped from building

AN off-duty police officer was found dead outside a Surry Hills apartment block yesterday after threatening suicide with a knife.

The constable, aged 27, had served three years with the police force.

Police were called to a unit in South Dowling St after reports of a domestic dispute involving a man threatening to commit suicide with a knife.

A Surry Hills police spokesman said when officers arrived at the scene they found the constable dead and it appeared he had fallen from a third storey window.

He confirmed there was one witness to the man’s death, believed to be his partner.

The constable from the Quakers Hill command is the 15th police officer or former officer to die unnaturally in seven years.

Last Monday, a 39-year-old senior constable barricaded himself inside Earlwood police station with his own service gun and threatened to take his life.

Police negotiators managed to talk the officer, who was having marriage problems, around and the siege ended peacefully.

The NSW Police Force is working with the Black Dog Institute on a new program to help police recognise mental health issues.

At least 200 police are off work on stress leave.

The death of the officer yesterday was the first of a serving officer since Greg Norman Lundberg died in Menai police station on January 7.

Last week the commissioner said his police were not made of concrete and that police faced a daily barrage of trauma, including child sexual abuse, murder and road carnage.

“As much as you try and shut it out, it must ultimately have an impact,” Mr Moroney said.

“I keep saying to my officers it is OK to cry in a stressful situation or at the funeral of a colleague. Don’t bottle it up.

“If you are showing signs and symptoms of stress there are internal mechanisms, we can deal with that, if you had a broken leg or a cold you wouldn’t be ashamed.”

A spokesman said the constable’s death was not being treated as suspicious.

An off-duty NSW policeman has died in a fall from a unit block after earlier threatening to kill himself, just days after the state’s police force moved to introduce new mental health safeguards for officers.NSW Police Force Commissioner Ken Moroney extended his condolences to the 27-year-old officer’s family, friends and colleagues yesterday.The officer died after falling from a third storey window in a block of units in Sydney at about 2.45am (AEST) yesterday. Police said there were reports of a domestic dispute inside the unit. The man’s partner has been interviewed by police, who say the death is not being treated as suspicious. Police found the officer’s body after being called to the unit block in inner-city Surry Hills after the incident.The off-duty policeman was threatening to commit suicide with a knife before the fall, reports suggest.A suicidal NSW highway patrol officer was prevented from taking his life at a Sydney police station last week. The 39-year-old married man was experiencing family problems.

Experts say relationship breakdown is a major factor for police, with many officers tending to have unstable personal relationships.

The weekend’s events have again thrown the spotlight on the mental health of police officers and the high rate of suicide within their ranks.

Before yesterday’s incident, 14 serving and former NSW officers had taken their own lives in the past seven years, the most recent being 29-year-old constable Greg Norman Lundberg on January 7.

About 200 NSW officers are currently on stress leave.

Mr Moroney last week announced that a program by the Black Dog Institute, an organisation set up to deal with depression, was launched in March to teach senior police officers how to spot stress and depression in their staff.

All officers above the rank of superintendent will have completed the one-day course by the end of the year, and inspectors and sergeants will follow next year.

Other support programs, including peer support officers, are available to all officers.

Mr Moroney said the Wellcheck program, which is aimed at police in high-risk specialist areas such as child abuse and accident investigation, will also be extended to general duties officers.

What pushed officer to his death

FOR five years Constable Nathan Hearps dedicated his career to protecting the residents of Quakers Hill.

Now his death in a fall from an apartment block after he threatened suicide with a knife has shocked a police force scrambling to deal with rising mental health issues.

Constable Hearps, 29, took up his post at Quakers Hill with seven other new officers after graduating in a class of 640 from the police college in September 2002.

At the time he and his fellow recruits were praised by local MP John Aquilina for their commitment to protecting local residents.

Constable Hearps grew up in Cattai in Sydney’s northwest.

Five years ago he was watching when his father Carl miraculously survived a 250km/h powerboat crash during a race on the Hawkesbury River.

Fellow officers said he was badly affected after seeing a woman throw herself in front of train a year ago while he was off duty.

Early on Sunday morning, fellow officers were called to an apartment block in South Dowling St, Surry Hills where two men were in a domestic argument, with one threatening suicide with a knife.

By the time officers arrived just before 3am they found Constable Hearps‘ body on the footpath below an open window.

His partner said on Sunday night: “I just wish this never happened.

Constable Hearps‘ death comes as police said they would reopen the cases of 12 officers who have committed suicide over the past seven years as the force works to find any links between the deaths and the pressure of the job.

A spokesman for the Police Medical Officer announced he would examine the officers’ medical and psychological backgrounds to see whether better support mechanisms were needed.

“That might inform us of anyone who might be at risk in the future,” police director of safety Julie Wills said.

News police would reopen the cases of previous suicides emerged as the NSW Police Association criticised the force for not conducting exit interviews of officers who choose to leave the force.

They said such interviews would help determine how officers are coping with the stresses of the job.

The union is now working on its own plan to interview officers who leave the force.

“It costs tens of thousands of dollars to train police to work independently in the field and they don’t even know why these people are resigning from the force,” he said.

“Wouldn’t you like to know, as an employer, if people are leaving because stress is too high or because they’re sick of the place?

“We have spoken to them for many years about doing this but it never happens.”

Fellow officers said Constable Hearps was well liked and would be missed.

The NSW Police Force has been rocked by the actions of another apparently suicidal officer.

This time a high-ranking officer is in a coma in hospital after trying to commit suicide in a hotel room, The Daily Telegraph reports.

Superintendent Paul Nolan, 54, was recently suspended from the force because he is under investigation by the Police Integrity Commission.

He was found unconscious about midnight on Tuesday.

The nature of the PIC investigation is unclear.

This latest incident comes after Commissioner Ken Moroney last week expressed concerns about mental health issues among the force, publicly telling his officers that it was “OK to cry“.

In January, 29-year-old Constable Greg Lundberg committed suicide with his pistol in Menai police station due to personal problems.

Last month a 39-year-old senior constable barricaded himself inside Earlwood police station and threatened to take his life. 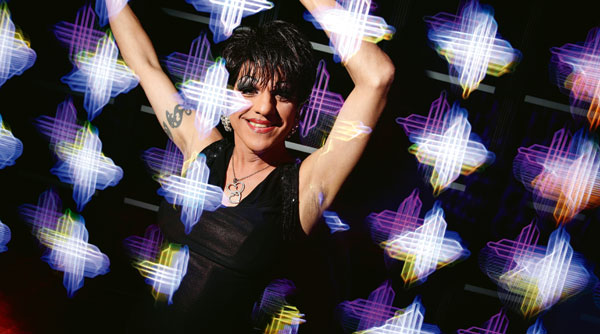 Darren Budda-Deen, received his drag name ‘Doreen Manganini’ from transgender icon Simone Troy back in the late eighties, just as Darren began a part time career in Melbourne’s drag scene. “I became very well known in Melbourne over the years and in the late 90s, decided it was time to crack Sydney. I had no idea I’d be the only indigenous drag queen in this town.”

Growing up with an Aboriginal/Pakistani father gave Darren a unique edge over his small town peers. “There were a few hundred people, the town shop and me. We were raised with an incredibly rich Aboriginal community around us, I always gravitated to that part of my heritage and was proud to take that side of it into the realm of drag,” Doreen says.

A quick wit and ability to talk underwater has allowed Doreen to find the humour in delicate issues. While she has been called politically incorrect for making light of the racial stereotypes which surround indigenous people, Doreen believes laughter is the key to understanding and reconciliation.

“I will make the odd Aboriginal joke, but I am conscious in the way that I do it. I feel empowered as I come from that culture and, through humour, can turn something that may be seen negative into something positive. I’ve had the seal of approval from within my culture.”

Both Darren and Doreen have received official approval from on high within the cultural ranks. “A group of Aboriginal elders walked in and watched my show. They came up to me afterwards and thanked me for my version of our cultural representation. They knew it was in fun, but it meant a lot to me.”

Behind the make up and shoulder pads, it’s been a turbulent year for Darren, who in June last year had to deal with the passing of his partner, police constable Nathan Hearps.

“It was a crippling time for me, and one of the things which pulled me through was the support from the gay community. We’re a diverse lot, Christ knows we have our differences, but I was overwhelmed by how close knit the community can be when you really need them.”

Another community from whom Darren receives support are the men and women of Quakers Hill Police station. Constable Hearps talked incessantly about Darren’s alter ego Doreen, leaving a lasting impression at the station. “They’ve been beautiful to me. I was saluted with a police guard of honour at the funeral.”

For Darren, a time of grieving brought with it a need for reflection. Shying away from the attention surrounding Doreen, Darren turned his attention to one of his true passions, painting. “I really appreciate the quality time of I’ve been able to spend in front of the canvas, expressing my heritage in a creative way,” he says, beaming. “Entertaining means so much to me, and I can’t imagine not doing what I do.”

Considering indigenous drag queens don’t come off a production line, Sydney should have Manganini listed as a cultural treasure.