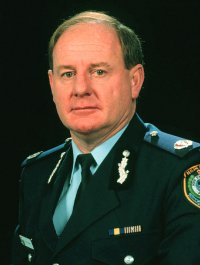 Assistant Commissioner Dick Adams joined the NSW Police in February 1971, spending the early years of his career in the metropolitan area. He transferred to Kempsey in 1975, to Wellington in 1986 and then to the NSW Police Academy at Goulburn in 1988.

Assistant Commissioner Adams was called up for national service shortly after joining the NSW Police, and served as a commissioned officer in the Australian Army and the Army Reserve.

In 1999, Assistance Commissioner Adams was awarded the Australian Police Medal.

In 1985, Assistant Commissioner Adams was a member of a Rotary Group Study Exchange Team to Israel, sponsored by Kempsey West Rotary Club.

In 1987, he was awarded the Prince of Wales award for “outstanding leadership in the Defence Force Reserves”. As a Prince of Wales Fellow, he studied at the Police Staff College, Bramshill in England, and with the British Army.

Your name was given to me by some of the displaced residents that you met in Eden last week.

MICEBS is a system developed for the Australian Army for Disaster Recovery and Humanitarian Operations.