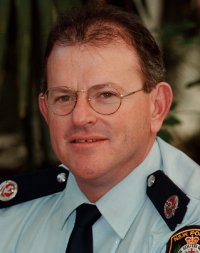 Assistant Commissioner Morris West joined the NSW Police in 1975, serving in the metropolitan area until 1981 when he accepted a posting at Camden. After working at Picton as lock up keeper and Campbelltown as shift supervisor, the then Snr Sgt West moved to Bourke as a patrol tactician in 1992.
He also relieved as patrol commander at Bourke and Walgett.

Assistant Commissioner West received the First Clasp to the National Medal in 2001.