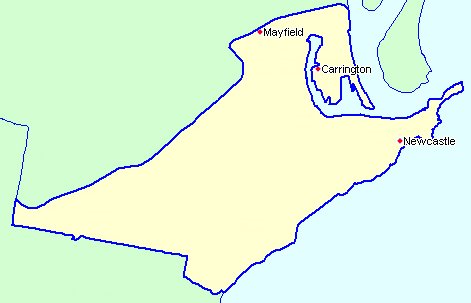 WEST WALLSEND
First Police Station was established in 1889 in rented premises belonging to the Methodist Church.
The first purpose built Police Station was officially opened 13 September 1951 at the corner of Withers & South St.
Those premises were decommissioned and closed some time in 2006.

“A new police station and premises to cost about £8000 are to be built at West Wallsend. They will be built on the corner of Withers and South Street. Plans drawn by the Government Architect provide for six rooms, two cells, two offices, exercising yard, garage and modern facilities. The building will be of brick, with a tiled roof. The concrete foundations will go about 5 feet to rock. The builder, Mr. C. E. Hoyle, of Lambton said that about 90,000 bricks would be needed. Owing to the shortage, the work might take some time to complete. The building now used as a police station is owned by the Methodist Church. The Church has been trying to get possession for some years, for the minister has to live in a room in the back of the church.”

Deaths in the line of duty

A memorial plaque was originally placed at the spot where Sergeant Haydon was killed, but was relocated to the grounds of the West Wallsend Police Station after it was damaged by vandals. When the station closed c.2006, the plaque was moved to Waratah Police Station and rededicated in a service held 8th December 2006.