Bega
Bega, 428 km south of Sydney via the Princes Highway, is a dairying town with a population of 4202 situated in the heart of a rich and fertile valley where the Bega and Brogo Rivers and the Princes and Snowy Mountains Highways meet. The heavily forested Brogo Ranges lie to the west of the river flats which stretch eastwards to the sea.

It is believed that the area was occupied by the Dyirringany Aborigines before white settlement. George Bass was the first European to explore the region after the survivors of the Sydney Cove walked through the area in 1797. Late that year Bass entered the Bega River at its ocean outlet and sailed upstream as far as Jellat Jellat.

Squatters fleeing drought around Braidwood moved into the Bega Valley in the late 1820s. The Imlay Brothers took up vast holdings the following decade with Peter Imlay establishing the ‘Biggah’ run in 1839.

The spelling of the town had settled into its modern form by the late 1840s when cattle, sheep, corn, fruit and vegetables were all apparently flourishing in the district. The town was laid out and gazetted in 1851 to the north of the present site but repeated flooding saw its removal to higher ground south of the river. There it developed along Auckland St expanding into Carp St. 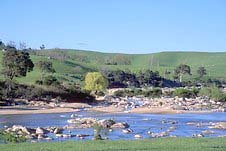 The Bega River between Candelo and Bega

The state of the roads around Bega were atrocious at this time. Alexander Whitehead wrote of them in an account of a trip from Bega to Wyndham:

I saw men mending some of the worst places by putting bushes in the holes and then covering them over with earth, so that it looked better until a heavy load came along … There was a nasty hole on the south side of where Frog’s Hollow bridge is now, when I got there the hole was filled up, not with bushes, but with a dead bullock, a worker I suppose, it appeared to fill the hole nicely.

This state of affairs, together with the lack of a rail service and the difficulty of getting to and from the port at Merimbula, meant that the Sydney markets were difficult to access. The opening of the wharf at Tathra (1862) changed this. The 1860s also saw the valley opened up to independent farmers. As a consequence of both developments dairying, and especially the cheese-making for which the town is now noted, grew rapidly in the next twenty years. 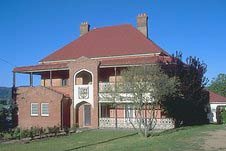 The introduction of advanced cheese making processes at the Tooth family’s Kameruka Estate was critical to the development of the industry in the valley. James Manning, manager of the Twofold Bay Pastoral Association, moved to ‘Wanagabra’ near Bega in 1864 after selling Kameruka. He was responsible for encouraging the German immigrants, whose ancestors now live in the Bega Valley, to work at the Kameruka estate. He introduced American cheese-making methods, commenced maize cultivation in the district, grew vineyards and, after pressing for the implementation of a telegraph line from Bega to Sydney, sent the first message in 1868.

Bega became a municipality in 1883 and, two years later, it was the first town in New South Wales to open a municipal gasworks.

Bega Cheese Heritage Centre
Given the history of the town an obvious starting point is the Bega Cheese Heritage Centre (1900). As you enter Bega from the north via the Princes Highway take a left into Bridge Street before the Bega River bridge then your first right into Lagoon Street. This restored original factory features displays of old cheese-making techniques and has an art gallery. It is open for inspections, cheese tasting and sales from 9.00 am – 5.00 pm every day.

Yarranung
Yarranung, with its homestead and outbuildings dating from 1851 when flooding forced its removal to higher ground, is located over the hill behind the cheese factory. It is now private property.

Historic Buildings
Opposite the museum is St John’s Anglican Church (1874) built of brick with stone trimmings upon the site of an earlier church dating from 1857 and designed by Edmund Blacket, noted for his work at the University of Sydney. The roof of the church is of slate with grey box roofing timbers cut on Mumbulla Mountain in Biamanga National Park to the north. 18 brass plates commemorate the names of the local men killed in World War I, three at Lone Pine. Blacket also designed ‘Littleton House’ for Thomas Rowlinson in Bega St in 1880.

The Court House (1881) at the corner of Carp and Gipps St, was designed by James Barnet, Colonial Architect from 1865 to 1890. It is a plain building of rendered brick with verandah, timber posts and an attractive, decorative iron railing. Opposite is Rosevear Jeweller’s (c.1899) which has an elaborate and delightful Victorian shopfront consisting of two curved shop windows with oak panelling on either side of a central door with a fanlight overhead and a chequered marble floor at the entrance. Also of some interest here is the former Bank of NSW residence beside the Westpac Bank.

At the intersection with Upper St and Gipps Street is St Andrew’s, the Presbyterian Church (1870) and, across the road, is the Uniting Church, formerly the Wesleyan Chapel (c.1868 with a porch dating from 1891). At the top of the hill is St Patrick’s Catholic Church and Presbytery (1882, extended in 1952) and, behind it, St Joseph’s Convent (1891).

Highway Patrol police carry out mobile patrols of all Sectors including Random Breath Testing, and use both Radar and Lidar equipment to detect speeding offences, They are involved in many special traffic operations throughout the year.

Police from within the Bega Sector are also involved in joint operations with the NSW Fisheries, Forestry and National Parks officers to detect and deter offences.

Check this out for a glimpse of Bega’s past…….click here